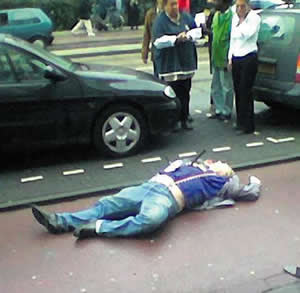 Theo van Gogh, lying murdered in the streets of Amsterdam.

A U.S. Muslim group has issued a dire Internet "warning" to creators of the satirical animated TV show "South Park" over a depiction of the Prophet Mohammad in a bear outfit.

"We have to warn Matt (Stone) and Trey (Parker) that what they are doing is stupid and they will probably wind up like Theo Van Gogh for airing this show," said a posting on website RevolutionMuslim.com.

The website posted a graphic photo of slain Dutch filmmaker Theo Van Gogh, who was killed in 2004 by an Islamic militant over a movie he made that accused Islam of condoning violence against women.

It also posted link to a news article with details of a mansion in Colorado that Parker and Stone apparently own, suggesting the Web posters know where to find the South Park creators.

The episode in question aired last week on cable channel Comedy Central of the 200th episode of "South Park", in which the Prophet Mohammad was depicted in a bear outfit.

"South Park" has a history of aiming biting satire at politicians, celebrities and the media, and its episodes have often drawn criticism.

The website of Revolution Muslim was down on Wednesday because of what a leader of the group called a traffic overload.

Most Muslims consider any depiction of the founder of Islam as offensive.

"How is that a threat?," he told Reuters. "Showing a case study right there of what happened to another individual who conducted himself in a very similar manner? It's just evidence."

According to U.S. law enforcement officials, the federal government rarely prosecutes threat cases. The First Amendment of the U.S. Constitution gives broad protections to free speech, and what constitutes a threat is often subject to interpretation.

In Ireland, police last month arrested seven people in connection with a suspected plot, involving the Internet, to kill Swedish cartoonist Lars Vilks. Vilks' 2007 sketch of the Prophet Mohammad with the body of a dog drew anger from Muslims.

Muhammad said his group "didn't tell anyone to go to their houses and conduct violence" and he added he is not worried the Web post would lead to violence against Parker or Stone.

He described his group as an alternative media outlet with about 20 active posters to the website. Members also engage in demonstrations and lectures at mosques, he said.

"Why would anybody that is plotting or planning to commit a violent act in retaliation, why would they need a post on RevolutionMuslim.com?" he said.