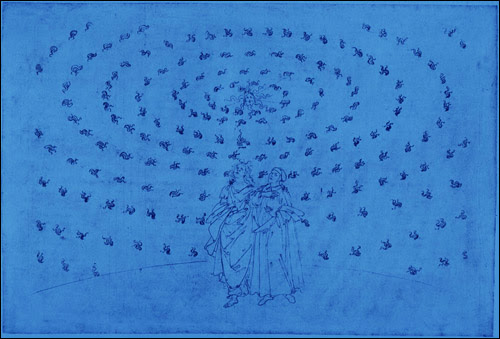 Dante and Beatrice in Fixed Stars in the constellation of Gemini, Dante's birth stars.

The Divine Poet was born on this day May 30th, 1265 in Florence Italy. Dante was Baptised on March 26th, 1266 in the Baptistery of San Giovanni.
O stars of glory, constellation steeped
in mighty force, all of my genius-
whatever be its worth-has you as source:
with you was born and under you was hidden
he who is father of all mortal lives,
when I first felt the air of Tuscany;
and then, when grace was granted me to enter
the high wheel that impels your revolutions,
your region was my fated point of entry.
To you my soul now sighs devotedly,
that it may gain the force for this attempt,
hard trial that now demands its every strength.
Paradiso xxii

The constellation chosen for Dante's entry into the sphere of the Fixed Stars is Gemini, the stars under which he was born (between May 21 and June 21, 1265) and to whose powers he attributes his talent (Par. 22.112-20). Gemini, meaning "twins," takes its name from the twin brothers, Castor and Pollux. Leda, wife of King Tyndareus of Sparta, was impregnated by Jupiter (in the form of a swan) and gave birth to the twins. Pollux was celebrated as a boxer, while Castor earned renown as a horseman. According to some versions, Pollux, fathered by Jupiter, was immortal but Castor, fathered by Tyndareus, was not, even though both brothers "hatched" from the same egg. When Castor was slain in battle, Pollux pleaded with his divine father that Castor be allowed to share his brother's immortality: Jupiter obliged by placing them in the heavens as the Gemini, the brightest stars of the constellation (Ovid, Fasti 5.699-720). Based on this mythology, Dante refers to the constellation as "Leda's lovely nest" (Par. 27.98). Dantesworld