Roman Catholic Traditionalists Who Blatantly Ignore The Words Of Our Lord 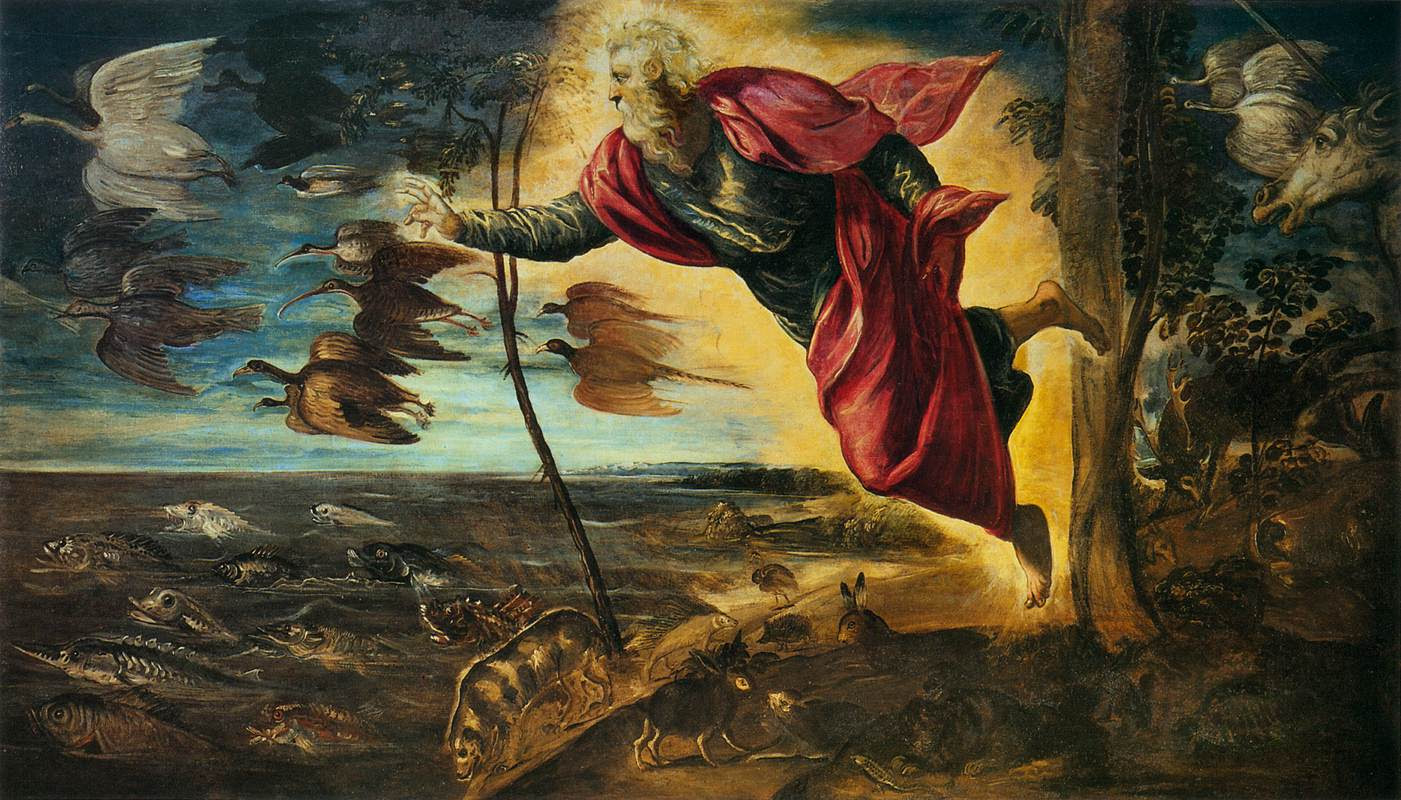 TINTORETTO
Creation of the Animals
1551-52

GOSPEL Matt. 6:24-33
At that time, Jesus said to His disciples: "No man can serve two masters. For either he will hate the one, and love the other: or he will sustain the one, and despise the other. You cannot serve God and mammon. "Therefore I say to you, be not solicitous for your life, what you shall eat, nor for your body, what you shall put on. Is not the life more than the meat: and the body more than the raiment? Behold the birds of the air, for they neither sow, nor do they reap, nor gather into barns: and your heavenly Father feedeth them. Are not you of much more value than they? And which of you by taking thought, can add to his stature one cubit? "And for raiment why are you solicitous? Consider the lilies of the field, how they grow: they labour not, neither do they spin. But I say to you, that not even Solomon in all his glory was arrayed as one of these. And if the grass of the field, which is to day, and to morrow is cast into the oven, God doth so clothe: how much more you, O ye of little faith? "Be not solicitous therefore, saying: What shall we eat: or what shall we drink, or wherewith shall we be clothed? For after all these things do the heathens seek. For your Father knoweth that you have need of all these things. Seek ye therefore first the kingdom of God, and his justice, and all these things shall be added unto you."

The above Gospel reading for the fourteenth Sunday after Pentecost was heard by every Roman Catholic that attended Latin Mass this morning. So how is it that the majority of Latin Mass attending Roman Catholics live their lives contrary to the above words of Our Lord who said:

Therefore I say to you, be not solicitous for your life, what you shall eat, nor for your body, what you shall put on. Is not the life more than the meat: and the body more than the raiment? Behold the birds of the air, for they neither sow, nor do they reap, nor gather into barns: and your heavenly Father feedeth them.

Instead, on this very Sunday there are Roman Catholic Traditionalists posting on Angelqueen of their plan of action for the coming doom that is supposed to be upon us all (so they would have you believe). Worrying themselves on how they are going to survive their impending doom, they tell others how one should prepare to survive the next disaster. The following is an example of the siege mentality at work in the mind of a Roman Catholic Traditionalist, Simple Man posted: Sat Aug 28, 2010 9:54 pm:

In the coming economic collapse, the thin veneer of civility will break down altogether.

We will see the results of original sin unleashed without restraint.

You sheeple had better get prepared.

By all means, pray your Rosary.

The unprepared (which is most of you) will try to take from the prepared.

But Catholics......still need to wake up.

Forget about contributing to your 401k or IRA: The government will steal that before you can ever draw a penny from it (Presuming there is still a functioning economy 30 years from now).

My guess is that we have about 1-3 years left before sovereign default, hyperinflation, and the destruction of the US Dollar.

In the meantime, check out this sweet website: A company that specializes in clandestine shelter construction (i.e., So your neighbors don't know you have the shelter), or, they can build you a fortress out in the open that nobody will be able to breech...

Yeah, the Amish, Jehovah Witness, & Mormon heretics prepare because as Our Lord had said against those heretics that no man can serve two masters, so the heretics chose to serve mammon instead of Christ and have become too solicitous for their own life because they are of little or no faith. So to have a Traditionalist tell Roman Catholics to wake up and follow in the footsteps of those who serve mammon is sheer folly. All this advice is given under the guise of preparing for some looked for societal collapse. Now to back up the folly of overly anxious preparedness, one poster compared those traditionalists who prepare themselves for the coming break down of society, to Noe. Read this post by: cantatedomino on Sun Aug 29, 2010 7:27 am

God sent word to Noe to prepare for the coming deluge. And by his preparation Noe was able to preserve God's seed - the seed of all beasts and creeping things, and the human seed of the Promise. In the case of Noe, the counsel to prepare was both spiritual and temporal

Problem with this comparison to Noe is that God spoke to Noe! Now I know for certain that God did not speak to any traditionalist commanding him to build a bomb shellter, to store food & to stockpile weapons for the coming economic chastisement. God does not command such things. Unless of course some trad really believes he is talking to God on how to prepare for the coming chastisement & this trad is just keeping mum about his visions of God out of prudence. But i doubt it cause a trad would lose all credibility if he were to start a sentence with "God told me..." So these trads want you to believe that the world is going to blow up & you need to follow in the footsteps of heretics in order for you to save your hide. I would said that this advice is contrary to today's Gospel reading.
Email Post