Why Would Anders Behring Breivik Attend His Final Martyr's Mass At A Church That Has A Mission To The Muslim Fulani Tribe Of Mali Africa? 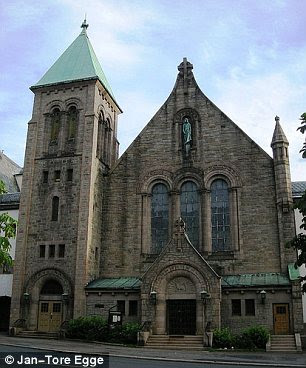 Manifesto: Breivik posted online that he would attend his final martyr's mass at Frogner Church (pictured) in Oslo Daily Mail


Frogner church has for many years had close ties to and contributed to a mission project in Mali as a missionary couple Rigmor and Ingvar Andersen Frøyen has stood for. When these came back to Norway, requested the Norwegian Missionary Society (NMS) of the church would continue to support the project with the new missionaries, which the Parish Council agreed to. This time is not Norwegian missionaries, but with African - from Benin and Nigeria.

The work among the Fulani in Mali started in 1986. Fulani is one of many ethnic groups in Mali. At the same time, they are part of a larger ethnic group that is almost across Africa south of Sahara, much of what is known as the Sahel belt.

There have been several trials of mission among the Fulani in Mali, also of the Catholics, but none have succeeded. It has been considered a very heavy work NMS and cooperative missions undertook. NMS works in the same ethnic group in Cameroon, and it was a Cameroon-missionary who conducted the feasibility study with a view to starting work. Fulani is strongly Islamized, but with certain elements of animism. The people are mainly nomads or semi-nomads. They make up approx. 1.1 million of Mali's about. 10 million inhabitants.

The work has several focal points: Evangelism, radio work, Bible translation and rural development. The latter include many activities such as health, agriculture, efforts for women and the organization of the village's efforts for their own development. Vaccine Rings, fertilizer use, drilling, training of "native women" are examples of activities that have given surprisingly good results. Rural development is unique in that most people are Muslims.

Today it is estimated approximately. 40 baptized Fulani. Someone new is now dåpsopplæring. The New Testament is translated into their language, and they have started on the Old Testament. Radio Efforts began modestly with the local production of the radio. Today, applications are sent out to approx. 25 local radios in a larger area. The programs have knowledge of the subject, health, agriculture, such as themes alongside Christian material - which must be presented with tact. The response is good - and even the careful presentation of the Gospel is perceived.

The work is concentrated in areas north and east of the provincial capital of Mopti, with headquarters in the city Sevare, areas in which they work, is largely in the north of the Niger River by the large inland delta (Niger-loop). Besides Sevare work, based on the cities Konz and Douenza.

The employees in the work of evangelization, which is now supported by Frogner church, the words from Benin and Nigeria. It is these two families we have pictures of the church room, Gouda (pronounced Goda) and Idriss. One is Samuel and Dorcas Gouda (pronounced Goda) with four children. Samuel's program manager for radio and his wife Dorcas Gouda is the technician! The radio is Sevare Melmar which has its center, near the provincial capital of Mopti. Gouda has been a staff member in the "Gospel Voice" (local drive for the Lutheran World Federation "Voice of the Gospel") for the NMS in Cameroon. Family Idriss, also with four children, is involved in evangelism and some reading lessons. They live a little east of Sevare. Remember them in prayer! The majority of the women responsible for women's work, and reading training and health education along with evangelism.

Last year they celebrated translation of the New Testament, and we hope that the NT in their own language will lead to inspiration and new impetus in the work.

One of the baptized has received so much training that he was for several years now has worked as an evangelist. One had previously been at a Bible school, and two more have recently completed a course.

There is still some way off that they can create and staff a "local church". But the efforts have borne fruit after 20 years, is the more promising. They work with liturgical texts, order, hymns, etc. parallel with the Bible translation, but given the fulanikirken to come also at the organizational level. The church is where the total effect of the baptized. The recent development of the work is that they have started preparatory work in Bamako, the capital, to try to reach some of the Fulani who live there. The team which consists of missionaries from Norway and a new African family from a neighboring country, he also Fulani. Thank you Mr. Anders Behring Breivik
for supporting my twelve Muslim wives and 63 Muslim children
May Allah Bless you and yours!
Email Post