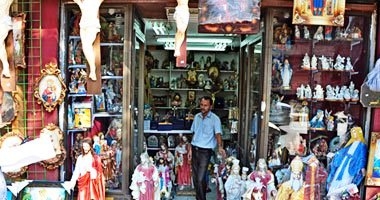 Religious Goods Store Selling All Manner of Statues And Crucifixes


Egyptian bookstores selling religious statues have been targeted by your average Muslim. Threats have been made against the shop owners. Several shop owners have received threatening letters:

"We warn you Nassara [Koran's derogatory term for Christians] to cease your foul trade, whereby you sell filthy idols."

Any destruction of Roman Catholic statues here in America will be most likely done by Muslim hands.

This is only the beginning.

Unfortunately modern clergy have no problem with destroying beautiful pieces of art and many of the Roman clergy will side with the Muslims before they side with the Blessed Trinity.

Just recently in the Archdiocese of St. Louis a statue of St. Mary of Victories had the head chopped off. The head was later returned with red paint splashed on both sides of the mouth.

Who committed the act? Many claim that this crime was satanic in nature - meaning that teenagers did it, most likely this horrible act was committed by hate filled Muslims who took a saw to the statue just before sunrise on Friday August 9th.

Friday is the Muslim day of prayer. It was also during the season of Ramadan - as any Muslim knows - 'Ramadan is a month of holy war and death for Allah. It is a month for fighting the enemies of Allah and God's messenger, the Jews and their American facilitators.' Qaedat al-Jihad