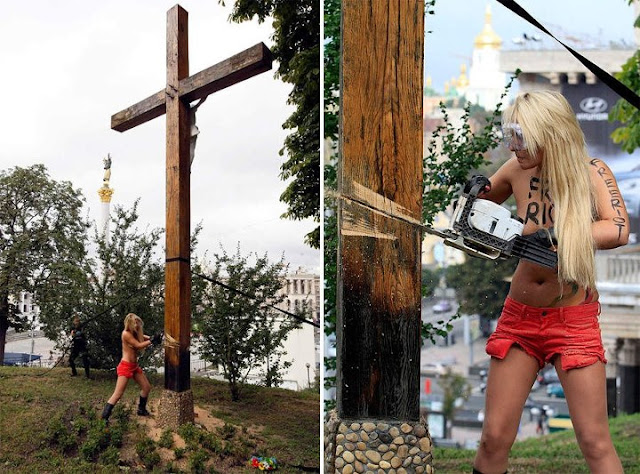 
C.I.A. funded FEMEN is a cabal of crazy Ukrainian chicks who have no husbands and are barren, unable to reproduce due to poor dietary habits, horrible hygiene and radiation poisoning. To keep themselves occupied, they show their tits in public and make ridiculous death threats against Putin & Kirill - the Russian Orthodox Bishop. 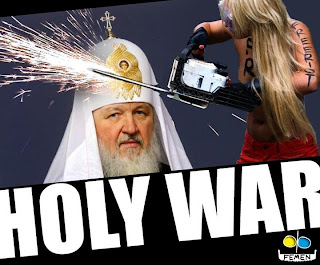 Kirill I Of Moscow


Sorry to admit that these women have taken a cue (twisted one at that) from Roman Catholic prophecy especially the third secret of Fatima - the pope martyred under a large cross made out of cork tree. Instead of arrows, the weapon of choice is a chainsaw for these ladies. The targets are religious and political and of course it is all symbolic - for now. 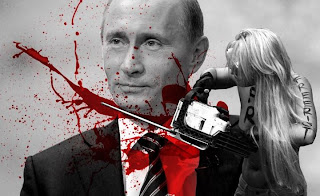 We start the war for freedom of women with our saw.
Putin and Gundyaev, femen will come back soon FEMEN


The only thing in common with these topless Ukrainian chicks and those soldiers who will one day kill the Fatima Pope is that both movements are pro-democracy. Both political movements will kill for love of modern democracy and hatred of the One True Faith. 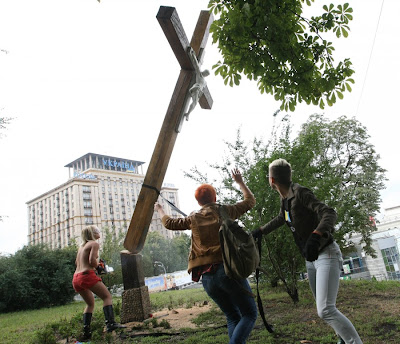 'The prosecutor office have opened the criminal case after the FEMEN protest supporting Pussy Riot! On the day of sentencing, the women's movement FEMEN expressed support and respect to Russian colleagues from the Group Pussy riot. In a sign of solidarity with the victims of the Putins regime Femen activists Inna Shevchenko piled a monument cross on the Maidan of independence with a chainsaw. Femen demand from church to stop support the dictatorship and hinder the development of democracy and freedom of women. FEMEN says if russian activists will be sentenced to prison terms, FEMEN will show their chainsaw for Putin and Gundyaev.' FEMEN
Email Post