The History Of Cain And Abel:

And Adam knew Eve his wife: who conceived and brought forth Cain, saying: I have gotten a man through God. And again she brought forth his brother Abel. And Abel was a shepherd, and Cain a husbandman. And it came to pass after many days, that Cain offered, of the fruits of the earth, gifts to the Lord. Abel also offered of the firstlings of his flock, and of their fat: and the Lord had respect to Abel, and to his offerings. But to Cain and his offerings he had no respect: and Cain was exceedingly angry, and his countenance fell. And the Lord said to him: Why art thou angry? and why is thy countenance fallen? If thou do well, shalt thou not receive? but if ill, shall not sin forthwith be present at the door? but the lust thereof shall be under thee, and thou shalt have dominion over it. And Cain said to Abel his brother: Let us go forth abroad. And when they were in the field, Cain rose up against his brother Abel, and slew him.And the Lord said to Cain: Where is thy brother Abel? And he answered, I know not: am I my brother's keeper? And he said to him: What hast thou done? the voice of thy brother's blood crieth to me from the earth. Now, therefore, cursed shalt thou be upon the earth, which hath opened her mouth and received the blood of thy brother at thy hand. When thou shalt till it, it shall not yield to thee its fruit: a fugitive and a vagabond shalt thou be upon the earth. And Cain said to the Lord: My iniquity is greater than that I may deserve pardon. Behold thou dost cast me out this day from the face of the earth, and I shall be hidden from thy face, and I shall be a vagabond and a fugitive on the earth: every one, therefore, that findeth me, shall kill me. And the Lord said to him: No, it shall not be so: but whosoever shall kill Cain, shall be punished sevenfold. And the Lord set a mark upon Cain, that whosoever found him should not kill him. Every one, therefore, that findeth me, shall kill me: And Cain went out from the face of the Lord, and dwelt as a fugitive on the earth, at the east side of Eden. Gen.iv.

U.F.O.? no you Star Trek retards. It's Cain. The only man banished to the east side of Eden to be forever fugitive and a vagabond - banished by God.

Turn off the Star Trek DVD and pay attention.

Cain was concerned that every one, therefore, that findeth me, shall kill me.

God said No! it shall not be so!

Lord set a mark upon Cain, that whosoever found him should not kill him.

No one has killed Cain our first murderer because Cain was banished on the surface of the Moon. Who can reach Cain there?

Now for those that may read Scripture, you may say that Cain was banished to earth not the moon for it reads that God said a fugitive and a vagabond shalt thou be upon the earth.

On earth, not the Moon it reads.

OK. How many elements are there? Four:

The Sun is the element of Fire: 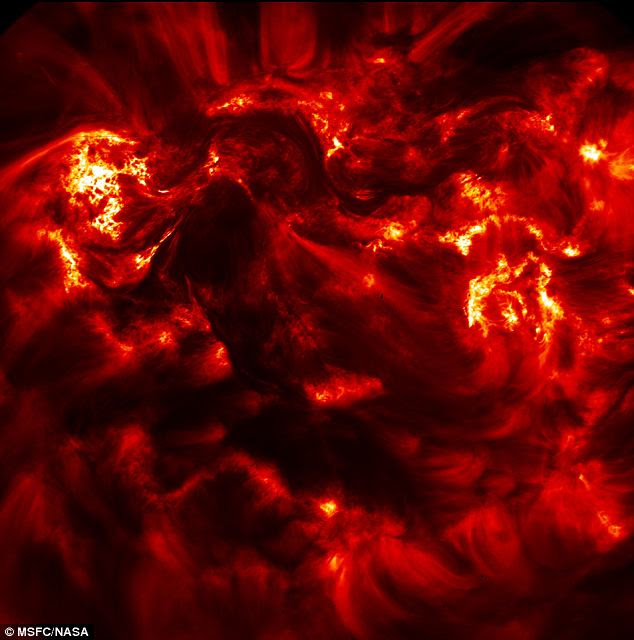 The Moon along with all other planets are made from the element of Earth.

Your objections do not stand.

So any movement spotted on the surface of the Moon is not some UFO, it is Cain.

Our ancestors always believed that Cain was banished to the Moon, Cain is the man in the moon.

You heard of the man in the moon? Well its Cain.

Following is a little history of the Man in the Moon - Cain - and the video: 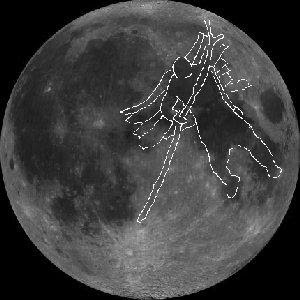 Cain
The Man In The Moon

'But tell me, what are the dark spots
on this body that make those down on earth
repeat their preposterous tales of Cain?'
Paradiso ii

We come now to that curious discussion concerning the Moon-spots which, it must be confessed, is apt to try the patience even of the poet's lovers. It seems at first sight little more than an old dry mediaeval problem dragged in without rhyme or reason. There is no harm in admitting the existence of a little human weakness even in Dante, as, for instance, an eagerness to air his new scientific theory; but I think we shall find that his final reason is to withdraw an old theory based on mere sense-perceptions for a spiritual one, in which all phenomena of the heavenly bodies are traced to the government of the Angelic Orders.

Let us now trace the course of the discussion with what patience we can. Almost immediately on arrival in the Moon, Dante asked Beatrice the cause of the dark marks upon it which give rise to the legend of Cain and the thorns. [This legend is referred to in Inf. xx. 124-6. It is familiar in English literature; see Tempest, Act. ii. sc. 2; Midsummer Night's Dream, Act iii. sc. 1; Act v. sc. 1, etc. According to one form of the story, the thorns are those which Cain threw on the body of Abel to conceal his crime. For some curious variations of the tale, see C. G. Leland, Legends of Florence, 254-271.] She turns the question on himself: what is his own opinion? In reply he repeats the explanation which he had already given in the Convito (ii. 14), that the spots are due to variations in the density of the Moon's substance: 'If the moon be rightly examined two special things are perceived in her which are not perceived in the other stars; the one is the shadow upon her which is nought else than the rarity of her substance, whereon the rays of the sun may not be stayed and thrown back, as from her other parts; the other is the variation of her luminosity, which now shines from the one side and now from the other, according as the sun looks upon her' [Wicksteed's translation, Temple Classics. Dr Toynbee in his Dante Studies and Researches (78-86) traces this theory to Averroës, but Dr. Moore (Studies in Dante, 2nd series, p. 362) thinks Dante probably took it from Ristoro d'Arezzo's La Composizione del Mondo, written in 1282. Milton's theory as given by the Archangel Raphael is apparently that of Averroës, that the spots are vapours which the moon draws to herself for her own nourishment:

Of Elements
The grosser feeds on the purer: Earth the Sea;
Earth and the Sea feed Air; the Air those Fires
Ethereal, and, as lowest, first the Moon;
Whence in her visage round those spots, unpurged
Vapours not yet into her substance turned.
Par. Lost, v. 415-420.]

In refutation of this Beatrice enters into an elaborate argument in true scholastic fashion. She smiles at the fable of Cain as an example of the errors into which men fall when they have only 'the key of sense' to unlock mysteries; and Dante's own theory is proof that even reason, when it follows the senses, 'has short wings.' Her arguments will show how far his thought was sunk in falsity.

'But come now, for Cain, with his thorns,
already stands above the border of both hemispheres
and touches the waves below Seville.
'Surely you recall, two nights ago,
the moon, already full, did you no harm
at any time in the deep wood.'
inferno xx

Virgil hurries Dante on after a mere glance, for already 'Cain and the thorns' [with reference to the popular superstition that Cain is 'the Man in the Moon'; according to some forms of the story, the thorns are those with which he strove in vain to hide the body of his murdered brother; and the wandering moon may be regarded as the land of Nod (Wandering) into which he was banished (comp. Mids. Night's Dream, iii. 1; v. 1; Leland's Legends of Florence, first series, p. 254)] stands on the horizon and 'touches the wave beneath Seville': in other words, the moon is setting in the west some time between six and seven on the Saturday morning, the day after they began the pilgrimage. It is sunrise, but the sun being the sensible image of God [Conv. iii. 12] is too sacred to be named in this lost world of darkness and eternal night. All indications of time, even during the day, are given be means of the moon.