Pope Francis To Live In Vatican Hotel? But The Third Secret Of Fatima Is Held In A Wooden Safe In Papal Apartment Of The Apostolic Palace 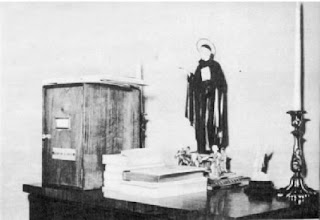 Wooden Safe In Papal Apartment of the Apostolic Palace

1958, October The well-known magazine Paris-Match publishes a photo of the wooden safe in Pope Pius XII’s apartment in which was kept the Third Secret of Fatima. Fatima.org

Pope Francis refuses to live in the Papal Apartment of the Apostolic Palace, and instead he will live in the Vatican Hotel - the Domus Sanctae Marthae. The Hotel has 300 rooms. Makes it easier for the humble pope to meet "guests" without all the security around. 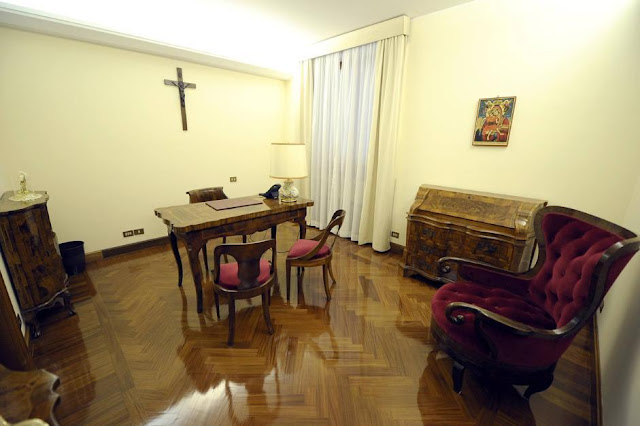 Is the third secret even still in a wooden safe?

For more on the history of the wooden safe and its contents:

In effect, contrary to what is implied by Cardinal Ottaviani’s declarations in 1967, we now know that the precious envelope sent to Rome by Msgr. Cento was not placed in the archives of the Holy Office, but that Pius XII wanted to keep it in his own apartment.

Father Caillon received this information from the mouth of journalist Robert Serrou, who himself got it from Mother Pasqualina, in this way. Robert Serrou was doing a photo story for Paris-Match in the apartments of Pius XII. Mother Pasqualina – this woman of great common sense who directed the handful of Sisters acting as the Pope’s housekeepers, and who sometimes received his confidences – was present.

Before a little wooden safe placed on a table and bearing the inscription, «Secretum Sancti Officii» (Secret of the Holy Office), the journalist questioned the Mother: «Mother, what is in this little safe?» She answered: «The third Secret of Fatima is in there...»


The photograph of this safe – which we have reproduced here – was published in Paris-Match a year and a half later, on two occasions, at the time of Pius XII’s death.47 Unfortunately, in these two articles Mother Pasqualina’s disclosure was not mentioned, and the report was also presented as having been done after the Pope’s death, during the interregnum. But how could a journalist have had access to the Vatican’s pontifical apartments and speak there with Mother Pasqualina while Pius XII was dead at Castelgandolfo, and when right after his death the seals had been placed according to custom on the Roman apartments? This incredible supposition cast doubts over the authenticity of the testimony.

To set the record straight, I asked Robert Serrou to be good enough to clarify for me what had really happened. His answer is perfectly clear and dispels all difficulty. In effect the reporting took place before Pius XII’s death; and so by a simple journalistic artifice it was presented in the magazine as having been done during the interregnum:

«In response to your letter of January 5, 1985, I can confirm for you that I did indeed do a story in Pius XII’s apartment on May 14, 1957, in the late morning, that is a little over a year before the Pope’s death. I found the precise date by rummaging through my notes for you, which as you can imagine was no simple affair. It is correct that Mother Pasqualina did tell me, while showing me a little safe bearing a label with the words “Secret of the Holy Office”: “In there is the third Secret of Fatima.”
«I believe I can tell you that there is no doubt about the veracity of this Sister’s information.»48


The precise date of May 14, 1957, is of the highest interest: the envelope with the Secret had arrived at Rome on April 16, barely a month earlier. This allows us to suppose that Pius XII immediately placed it in this safe where it remained, at least up to the moment of his death.

Now that this fact has been established – which proves that Pius XII attributed great importance to this third Secret – the question becomes even more acute: did he open the envelope and read its contents?

As disconcerting as it might seem, except for the presence of the precious manuscript in his own office – which of itself does not constitute sufficient proof – we have no proof, no evidence allowing us to state that Pius XII really did read the final Secret of Fatima.

It is astonishing and stupefying, but on the contrary, several facts seem to indicate that he didn’t want to read it, in this respect following Bishop da Silva’s example.

On February 11, 1967, in his allocution «on the Secret of Fatima», Cardinal Ottaviani – very curiously – makes no allusion to Pope Pius XII:


This declaration calls for three remarks:

1. By stating that the Secret was passed on to the Holy Office by Msgr. Cento, the Cardinal used a very imprecise but not false formula since the Pope – who was himself, we must not forget, Prefect of the Holy Office – had placed it in a safe with the inscription, “Secret of the Holy Office”. 2. If Pius XII had read the Secret, then, in February of 1967, Cardinal Ottaviani had no reason to hide it from the public, quite the contrary. 3. By indicating that the Secret was passed on to John XXIII «still sealed», he seems to state that Pius XII did not read it.

We have another testimony: that of Msgr. Loris Capovilla, who was the private secretary and confidant of John XXIII. Questioned in 1977 by Father Alonso, Msgr. Capovilla also expressed the opinion that Pius XII had not read the third Secret.50

Father Freire observes that there was no evidence allowing us to believe that Pius XII read the Secret.51 Father Alonso opts equally for the negative: «Was the servant of God, Pius XII, able to read the Secret? We believe he did not, since he surely either did not believe it was important – and in this case it is still another reason to confirm that in 1957 there was still not the slightest apprehension at Rome about the “Secret” – or, if he believed it was important, he preferred to wait until the year 1960, but by then the Lord had already called him to eternal glory.»

«What is absolutely false is a rumour that was already current in 1957, that Pope Pius XII did read the letter and that he wept because of the terrible things said in it about Germany. As Father Leiber, a close friend of the Pope, assured us, “That report is completely unfounded. There is not a word of truth in it.”»52

In 1982, in his last article devoted to Fatima, shortly before his death, Father Alonso is even more categorical: «Pius XII certainly did not read the document.»53

Upon examination, we feel compelled to agree with this conclusion of the Fatima expert. Indeed if Pius XII had read the third Secret, undoubtedly he would have made some allusion to it before one or another of his confidants, and we would have known. Perhaps we even would have found some echo of it in his official acts. Now we do not have the slightest evidence of that. At the very least, it would have been noticed in 1959 that the two envelopes sealed with wax by Sister Lucy and Bishop da Silva had been opened. And in 1960, Rome surely would have informed the public that Pope Pius XII had been the first to read the Secret and had decided to say nothing, without even promising that it would be revealed in 1960. On the contrary, the testimony of Cardinal Ottaviani and Msgr. Capovilla agrees in saying that the envelope was passed on, «still sealed», to John XXIII.


«THEY DID NOT WANT TO READ IT»

To these weighty arguments we can add another and no less convincing argument, although of a completely different order. It is furnished to us by Sister Lucy’s authentic declaration to Father Fuentes on December 26, 1957, thus over eight months after the Secret’s arrival at the Vatican. Sister Lucy confided to the Postulator for Jacinta and Francisco’s cause for beatification:

«Father, the Most Holy Virgin is very sad because no one has paid any attention to Her Message, neither the good nor the bad. The good continue on their way but without giving any importance to Her Message... I am still not able to give any other details because it is still a secret. According to the will of the Most Holy Virgin, only the Holy Father and the Bishop of Fatima are permitted to know the Secret, but they have chosen not to know it so that they would not be influenced. This is the third part of the Message of Our Lady which will remain secret until 1960.»54


In December 1957, no doubt after a Divine Communication, the seer states that Pius XII did not want to read Our Lady’s final Secret any more than the Bishop of Leiria. It was a disconcerting, mysterious refusal – and how deplorable! We can hardly imagine the motives for it. However, an attentive examination of the attitude of Rome, and especially Pope Pius XII himself during the final years of his pontificate, will undoubtedly clear up this enigma.  More here
Email Post