GHIRLANDAIO, Domenico
Stigmata of St Francis
Mt. La Verna (detail)
1483-85
I dreamed of this one here as Lord and huntsman,
pursing the wolf and the cubs up the mountain
(which blocks the sight of Lucca from the Pisans).

“J.M.J.
The third part of the secret revealed at the Cova da Iria-Fatima, on 13 July 1917.
I write in obedience to you, my God, who command me to do so through his Excellency the Bishop of Leiria and through your Most Holy Mother and mine.
After the two parts which I have already explained, at the left of Our Lady and a little above, we saw an Angel with a flaming sword in his left hand; flashing, it gave out flames that looked as though they would set the world on fire; but they died out in contact with the splendour that Our Lady radiated towards him from her right hand: pointing to the earth with his right hand, the Angel cried out in a loud voice: ‘Penance, Penance, Penance!'. And we saw in an immense light that is God: ‘something similar to how people appear in a mirror when they pass in front of it' a Bishop dressed in White ‘we had the impression that it was the Holy Father'. Other Bishops, Priests, men and women Religious going up a steep mountain, at the top of which there was a big Cross of rough-hewn trunks as of a cork-tree with the bark; before reaching there the Holy Father passed through a big city half in ruins and half trembling with halting step, afflicted with pain and sorrow, he prayed for the souls of the corpses he met on his way; having reached the top of the mountain, on his knees at the foot of the big Cross he was killed by a group of soldiers who fired bullets and arrows at him, and in the same way there died one after another the other Bishops, Priests, men and women Religious, and various lay people of different ranks and positions. Beneath the two arms of the Cross there were two Angels each with a crystal aspersorium in his hand, in which they gathered up the blood of the Martyrs and with it sprinkled the souls that were making their way to God.

To what purpose is this waste? Thousands unable to attend Holy Thursday Mass said by the newly elected Supreme Pontiff?

Instead hose who have nothing to do with the Roman Catholic Faith get all of the attention of the Supreme Pontiff on that Holy Thursday.

Again to what purpose is this waste?

Conversion of poor souls? No! of course not you know that and I know that the Supreme Pontiff is not about conversion. The Pope refuses to call souls to the Roman Catholic Faith.

Francis is a destroyer. Please give him a chance to prove himself - you say. He had fifty years to get it right and he failed. But you say he has been in office for only a few weeks! NO! Pope Francis is a continuation of the last four popes back to the bad pope John XXIII (excluding Pope Benedict). So his pontificate is in reality fifty years old and running.

The last fifty years are a complete rejection of 2000 years of Roman Catholic Tradition.

Now ask yourself is this Pope Francis the Fatima Pope? 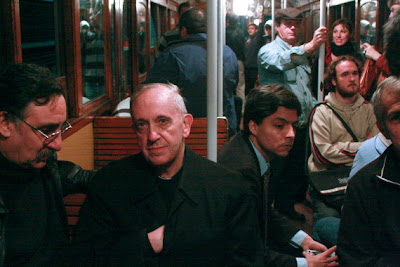 Man Of The Peeps

No, Francis is not a Pope destined for martyrdom.

Francis has his agenda and that is to destroy the last remnants of Holy Roman Catholic Tradition. Francis cares not for the Mass or the sacraments. He certainly cares not for the conversion of the world. And he will never restore all things in Christ. He actions speak to this fact.

This is why he chose the name Francis - to give the impression that he will rebuild the Church just as St Francis did and was called to do by God. Call this a misdirection to fool the weak minded souls into believing that restoring the Church means exactly what St Francis did - when in fact this Pope means something entirely different - restoring the Church into his image or in the image of modern man. Most of you have already caught on to this simple fact.

This is why I call this Pope - Francis the Destroyer.

Now in order to carry out his destruction of what little remains the Pope needs like minded souls that will do his bidding - souls that are part of him.

If I wash thee not, thou shalt have no part with me. Jn.xiii.

This is the reason to wash the feet of criminals whores pimps Muslims etc. This Pope identifies with destroyers of their own souls. The inmates of Casal del Marmo prison outside of Rome. Of course the world applauded this event as a wonder.

These twelve criminals are chosen by Pope Francis to carrying out his desired destruction.

These are strong words against the man who would rather be called just another bishop than to the called Pope - time will tell how true these words are.

Pope Francis hates all that is good and Holy in the Church, he hates all the rich tradition - the tradition that reminds him that he is headed for hell.

Pope Francis is jealous of Roman Catholic Tradition - and he aims to destroy it.