The United Kingdom Independence Party (UKIP) is not distributist, but some of their policies appear to be more compatible with Distributism than the three major parties in the UK. They are leaders in the movement to leave the European Union, trying to show the citizens in their country how the EU leaders are taking more and more control over the laws that effect their every day lives, and in fact are trying to form a federal government complete with its own flag, national anthem, and military. UKIP has also made statements about the power of big business to manipulate government to its own advantage, and the importance of a strong local economy based on small, local businesses. They also advocate more local control over public services currently controlled by the central government. In this, UKIP does not argue that government has no involvement, but that centralized control is both inefficient and ineffective. It would be interesting to see how the party would react to ideas like local guilds, especially if enough local leaders within the party advocated for it. Let’s keep them in our prayers. The Distributist Review

As if it matters, both Crampton and Shea are lovers of Ron Paul. Crampton admires Ron Paul as some sort of inspiration and see Shea fawning over Ron Paul here. Well Paul is history now so it doesn't matter. As a side note I always thought the bike riding Paul was a closet Nazi: 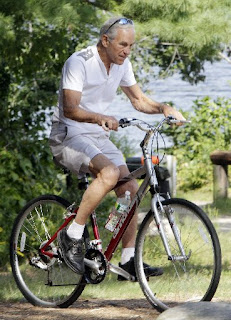 But Mr. Shea's dream of a world rid of the Latin Mass is not gonna happen. Mr Shea and his ilk are on the wrong side of history and on the wrong side of the Blessed Trinity. Let me tell you a little secret - all the prophecies from the Mother of God down to Her faithful servants tell of a time of woe and then a time of Triumph. The time of woe is now. The time of Triumph will be soon enough. It will be called the Triumph of the Immaculate Heart of Mary.

Now please sit down and ask yourself - is defending the new mass a Triumph? No. it is not. The Triumph of the Immaculate Heart of Mary has nothing to do with those who pretend the new mass will last until the end of time.

So Mr. Flabby Tits has declared war on the Latin Mass.

Please have a look at all the ridiculous posts and comments from those who hate the Latin Mass and do not want to see the Triumph of the Immaculate Heart of Mary:

Why Would a Catholic from a Jewish Background Feel Unwelcome
April 9, 2013 By Mark Shea

An evil not even tolerated among the pagans
April 10, 2013 By Dawn Eden

What Anti-Semitism Problem in Traddery?
April 12, 2013 By Mark Shea 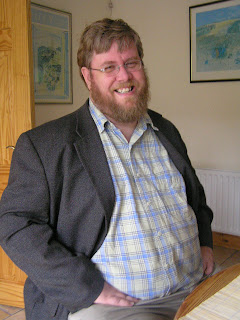 Don't kid yourself it is now a time of either or. Everyone has to chose sides. So how do you determine if you are on the right side? On the side of God?

Keep to what has always been. Those who attend the new mass reject tradition and love novelty, they also have very weak arguments in defending their bizarre love for novelty. For instance Mr. Flabby Tits (Shea) wants everyone to denounce Holocaust deniers that attend the Latin Mass. Shea wants these Jew hatin' Latin mass attendees kicked out for good!

Problem with Shea's strategy is that it is hard to tell who is a Jew hatin' Holocaust denier at the Latin Mass. Why? Because unlike the new mass, those who attend the Latin Mass are there to worship Jesus Christ Crucified not talk and shake hands with our neighbour.

Leave the Latin Mass alone and clean up your own political house of Distributism! The six million figure has nothing to do with Catholic Liturgy it has everything to do with politics.

Now for the embarrassing part for Shea. Seems as if a member of a Distributist (see quote above) political party in the U.K. is a Jew hatin' Holocaust denier.

Her name is Anna-Marie Crampton, she is a UKIP political candidate and she has the same world view as Mark Shea 'cept for the Jew hatin' part.

Here is some of the things Mark Shea's fellow Distributist traveler had to say:


'The Second World Wide War was engineered by the Zionist jews and financed by the bankers to make the general public all over the world to feel so guilty and outraged by the Holocaust that a treaty would be signed to create the State of Israel as we know it today.'  Anna-Marie Crampton

'Holocaust means a sacrifice by fire. Only the Zionists could sacrifice their own in the gas chambers.' Anna-Marie Crampton

Here is a sample from her face book page: 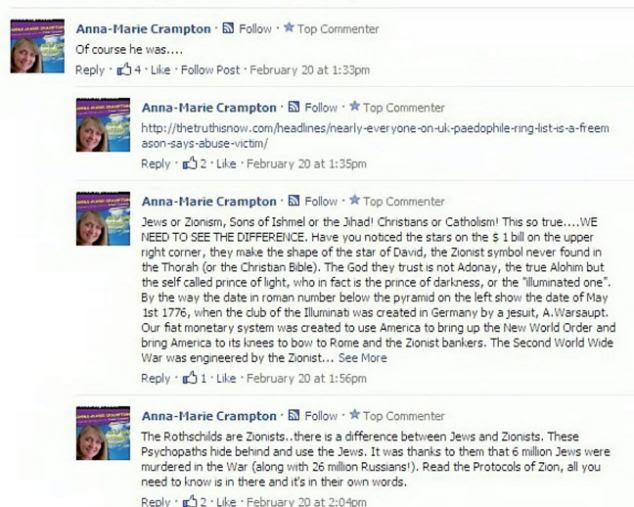 Mark Shea clean up your own house and leave us alone!