Deadly Natural Disasters For The Third Week Of June 2013: Nature Takes Vengeance On Account Of Pope Francis The Destroyer! 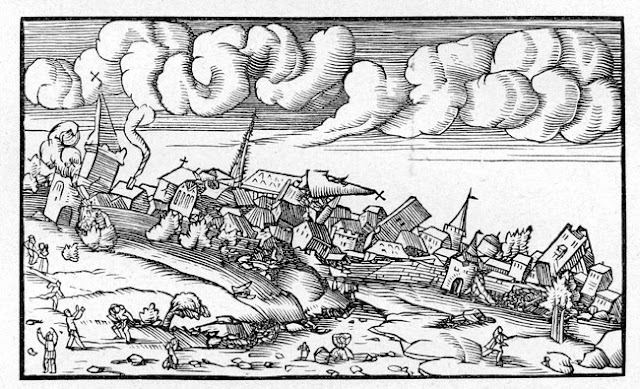 “The priests, ministers of my Son, the priests, by their wicked lives, by their irreverence and their impiety in the celebration of the holy mysteries, by their love of money, their love of honors and pleasures, and the priests have become cesspools of impurity. Yes, the priests are asking vengeance, and vengeance is hanging over their heads. Woe to the priests and to those dedicated to God who by their unfaithfulness and their wicked lives are crucifying my Son again! The sins of those dedicated to God cry out towards Heaven and call for vengeance, and now vengeance is at their door, for there is no one left to beg mercy and forgiveness for the people. There are no more generous souls; there is no one left worthy of offering a stainless sacrifice to the Eternal for the sake of the world. Our Lady of La Salette 19 Sept. 1846 (Published by Mélanie 1879)


Call this a death count - a pope death count - this is a list of deadly "natural" disasters that have occurred for the third week in June. "Natural" because the four elements and the rest of nature have taken vengeance on men - taken vengeance by the command of God. Many of you may not believe that the sins of men are punished here in this life or in the next. Your sins are punished one way or another - its up to you to stop sinning and do penance for the crimes you commit against God against yourself and against your neighbor - but the lot of you don't care - and this is why you are punished.

Now some of us are punished more in this life because of our sinful ways and some of us cause great harm to others by our sinful actions.  Who is responsible for the greatest harm towards others for the sins they commit? The priests! Pay attention to the above words of Our Lady - the priests are given to us to help us - not hurt us - but because many priests would rather sin than love God or neighbor, many of us will suffer on account of the sins of the priests.

So this blog is set to point out that the time for our 35 years of punishment is now - in our time because of the sins of the priests.

Please take note that Pope Francis is blaming all the world's ills on the greed of the Jew bankers, the market speculators, the corrupt businessmen and the corrupt politicians. Pope Francis deflects the blame to those lay folk. The Pope refuses to right the wrongs done to God by the sinful actions of the priests. Francis refuses to say mea culpa, mea culpa, mea culpa. Francis will not admit that his crimes and the crimes of the churchmen are the root cause of all our ills.

Interesting to note about the words Our Lady at Fatima:


the Holy Father passed through a big city half in ruins and half trembling with halting step, afflicted with pain and sorrow, he prayed for the souls of the corpses he met on his way

Make sense that the big city half in ruins is the result of many natural disasters taking place at once.

The reason? Again looking at the words of Our Lady - She said that mankind would be punished for over 35 years! Punished because the priests have given themselves over to sin and will not correct their evil way of life! Look at who is in charge - a man who believes that the stripped and barren mass is a thing of noble simplicity!! This same man would rather communicate and pray with protestant heretics than he would with traditionalists - lay and clergy.

So a couple of things to note if we are in the midst of 35 years of punishments because of the sins of the priests it means two things:

1. Pope Francis will have a long pontificate
2. The next Pope will be far worse than Francis!

So go ahead and draw up petitions to make the Pope change everything back to the way it was! It ain't gonna work! The Pope is not gonna listen to traditionalists! This is why the Blessed Trinity is using the four elements and the rest of nature to get the Pope's attention! Call it an ass kicking from the boot of God. This is the reason for the big city half in ruins - this will be the climax of the 35 years of natural disaster we will face.

It all ends in the big city half in ruins!

Now as for the soldiers on top a steep mountain lying in wait for the Fatima Pope? These men will kill the Fatima Pope believing that they are doing a service to God.

Why? Because many of the soldiers and their families will be victims of the 35 years of punishments and a man (the forerunner to the Antichrist) will rise up pointing the finger at the Pope claiming that he alone is responsible for the chastisements we suffer from - just like I am doing right now - the only difference is that I know this before hand and I know that the army that will kill the Fatima Pope will be made up of Nationalists from all over the world. These men will not be interested having the Pope abolish the new mass in order to restore the Latin. No these men will be interested only in Nationalistic ideas and causes as they are now, these men will be lovers of modern democracy, again, as they are now.

So expect greater natural disasters each week until we reach the big city half in ruins. Expect the Pope not to take notice of the cause and effect.

But do expect some to start point the finger at the Pope.

This is how it begins.

Best make sure you are on the right side of things. (don't be deceived - there is always a cloven hoof found somewhere - see my posts on Ann Barnhardt etc..;)

List of natural disasters for third week of June:

As a side note - the forerunner to the Antichrist will have the ability to raise up an army of nationalists taken from many nations as Our Lady said at La Salette because no one will be able to escape the 35 years of punishments - no nation is safe - no one will escape God's vengeance - it does not matter what nation or city or country or town you try to find as a safe haven - it will all be under the heavy hand of God because no place on earth obeys the ten commandments! So no sense in looking to run somewhere! Even if you do run and you obey the ten commandments - know this - does your neighbor? Are you sure?

No one is safe. And because everyone will feel the wrath of God, the forerunner to the Antichrist will have no problem raising up victims of the inaction of the Pope to help him wage war against the Church.