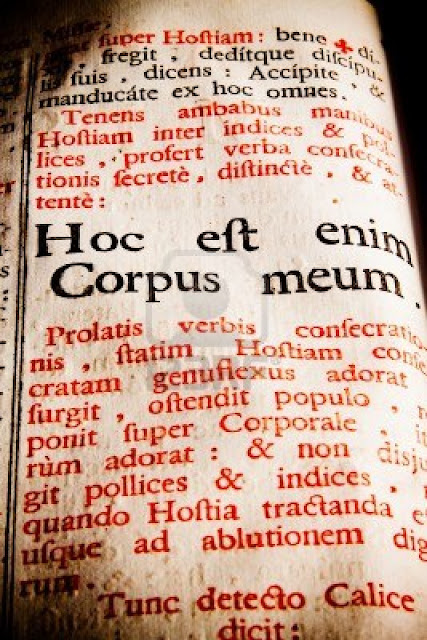 [The words of the Consecration of the Host:]
HOC EST ENIM CORPUS MEUM. FOR THIS IS MY BODY.

1620s, Hocas Pocas, common name of a magician or juggler, a sham-Latin invocation used in tricks, probably based on a perversion of the sacramental blessing from the Mass, Hoc est corpus meum "This is my body." The first to make this speculation on its origin apparently was English prelate John Tillotson (1630-1694).

I will speak of one man ... that went about in King James his time ... who called himself, the Kings Majesties most excellent Hocus Pocus, and so was called, because that at the playing of every Trick, he used to say, Hocus pocus, tontus tabantus, vade celeriter jubeo, a dark composure of words, to blinde the eyes of the beholders, to make his Trick pass the more currantly without discovery. [Thomas Ady, "A Candle in the Dark," 1655]  Online  Etymology Dictionary>>>>>


The folk etymology is however traced to a sermon by John Tillotson, delivered in 1694, which states ‘In all probability those common juggling words of hocus pocus are nothing else but a corruption of hoc est corpus, by way of ridiculous imitation of the priests of the Church of Rome in their trick of transubstantiation’, which exemplifies the stock figure of the conjuring priest, even if Tillotson goropizes. Jesuits and Philosophasters: Robert Burton’s Response to the Gunpowder Plot


Now the above reference pointing to 1694 as the origin of Hocus Pocus is a lie. The date of origin is earlier probably sixty years or so - not that any of you care - but the Roman Catholics in England back in the day took notice of the mockery of the Holy Sacrifice of the Mass and wrote about it - you can still find their writings in Recusant Literature series of volumes published by Scholar Press, The volumes cover the period of 1558-1640:


Hocus Pocus or Hocas Pocas is a bigoted remark made a long time ago by nasty English Protestants. The bigoted remark took hold and many who use the blasphemous words do not understand the origin of the remark. Some of course do - the enlightened ones - and they still use it today in the same way it was used back then. Is Obama one of these "enlightened ones"?


Now, President Obama would like to bomb Syria and he does not want anyone getting in his way, not the Constitution, not the American people, not Putin, not Congress, not China, not the UN and certainly not even the Pope.


For those that don't know Syria was at one time a Roman Catholic territory before the false and lying prophet Muhammad rose up from the pit of hell and caused havoc all over the face of half the globe.

To give some idea of just how Roman Catholic Syria was just read the list of Syrian saints:


How many saints were at the signing of the US constitution? How many saints were produced by modern democracy? Answer none. No Saint would ever vote, let alone give their life for modern democracy. Listen here you ballot casting fool modern democracy whether you admit it or not - is not from God - it is man-made created to revolt against the Divinely Ordained Authority of the Holy Roman Emperor -  you know - revolt just like Muhammad and his devils did against the Holy Roman Emperor. Modern democracy and Islam are both cut from the same cloth and arose up from the pit of hell to rebel against the Blessed Trinity and the Divinely Ordained Political Authority of the Holy Roman Emperor. Got it! No? Of course not - who you gonna vote for in next election and in the next election after that and in the next and so on to help restore and things in Christ? Who? Who? Most of you demented ballot casting fools would vote until very end until the Anti-Christ himself told you voting was no longer necessary.


So Obama now has to deal with a Pope who puts on a show on Saturday calling on the world to fast and pray for peace in Syria, and so Obama had to let his displeasure come out some how and Obama's displeasure was let out with his anti-Catholic words:

"I'm Bypassing the 'Hocus Pocus' of the United Nations" ~ Obama


Now granted Pope Francis is not one to notice such things as a dig against the Roman Catholic Faith by a US President, and I am sorry to say but I can even imagine a modern day pontiff like Francis using the same words Hocus Pocus to make fun of those who attend the Latin Mass. Very sad times we live in.
Email Post