GEORGE PELL: Well, Adam and Eve are terms – what do they mean: life and earth. It’s like every man. That’s a beautiful, sophisticated, mythological account. It’s not science but it’s there to tell us two or three things. First of all that God created the world and the universe. Secondly, that the key to the whole of universe, the really significant thing, are humans and, thirdly, it is a very sophisticated mythology to try to explain the evil and suffering in the world.

TONY JONES: But it isn’t a literal truth. You shouldn’t see it in any way as being an historical or literal truth? 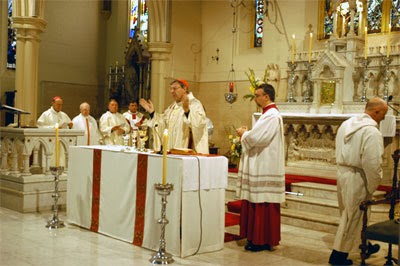 Q.  Bishop Fellay has denounced Pope Francis as “a genuine modernist”, and charged that while the Church was “a disaster” before he was elected, he is making it “10,000 times worse”. What do you say to this?

Cardinal Pell.  To put it politely, I think that’s absolute rubbish!   Francis said he’s a loyal son of the Church, and his record shows that.  He’s very, very concerned for the day-to-day life of the people, and for those who are suffering, those not well off and those in difficult situations.  He’s a completely faithful exponent of Christ’s teaching and the Church’s tradition.

Q.  So people like Fellay have completely misread Pope Francis?

A.  Yes, it is a gigantic misreading!  In actual fact, the Lefebvrists – many of them – have misread the situation for decades.  It was to Benedict’s great credit that he tried to reconcile with them, but they didn’t respond. Now the Church today accepts the Second Vatican Council. You don’t have to accept every jot and tittle of it, but it is part of Church’s life now, there’s no way around that.