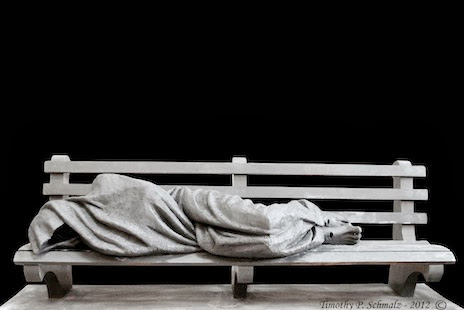 (Vatican Radio) A striking sculpture of Jesus, depicted as a homeless man sleeping on a park bench, was presented to Pope Francis following the general audience in St Peter’s Square on Wednesday. The unusual art work was brought over from Canada by sculptor Timothy Schmalz who has been exploring the contemporary face of Christian art for over two decades.

The large bronze sculpture was inspired by an encounter the artist had with a homeless person on the streets of Toronto several years ago, an experience that brought new insight into the Gospel passage about caring for the hungry, the thirsty, the naked and the strangers in our midst.

Just before the audience, Philippa Hitchen sat down with Timothy Schmalz to find out more about his work, his faith and his gift for the Pope….

"...what the Gospels and what Christianity provides is an endless well of creative possibilities.....what I try to do is come up with new perspectives on these eternal truths...."

I went to Toronto...and saw people, so many of them, lying on the street...I know I used to be used to that but being away and coming back, it was a shock....

I created a figure, almost completely wrapped in a sleeping bag, or a thick, old, rough blanket, and the only thing that's visible is his feet with the wounds from being on the Cross...

My hope is to have in most of the big cities this visual message....a sculpture is almost like a 24/7 preacher, if it's outside....so that people will have more concern about the homeless.."