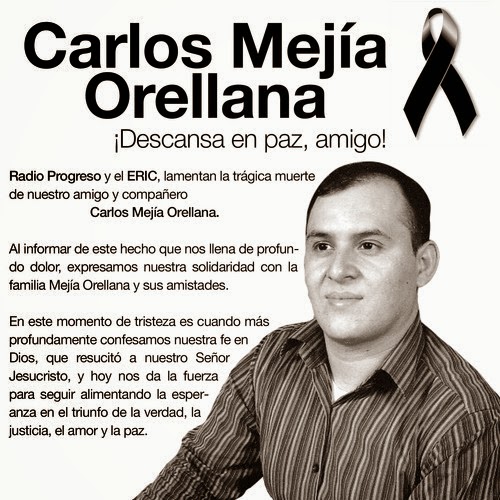 (Radio Progreso) On Friday, April 11, Jesuits and lay colleagues at two social ministries apostolates in Honduras learned Carlos Mejía Orellana was murdered inside his home. Mejía Orellana worked as the marketing director at Radio Progreso for 14 years. He was among the 16 employees at Radio Progreso and the Team for Reflection, Investigation, and Communication (ERIC) who have received repeated death threats for their journalism, community organizing and human rights work.

The Inter-American Commission on Human Rights had called upon the government of Honduras on three separate occasions to protect the lives and safety of staff at these Jesuits apostolates.

At a press conference on Saturday, Fr. Ismael “Melo” Moreno, SJ, director of these institutions, said that Mejía Orellana’s murder is another example of the failed security policy of the Honduran government and its lack of political will to take effective measures to protect its citizens

In September 2013, the U.S. Jesuit Conference organized a delegation to meet with Jesuits and collaborators in Honduras to learn about their work to organize communities and protect their land from mining companies and other powerful interests, work that became even more important and dangerous following the military coup in 2009. With corruption rampant in the Honduran police force and among elected officials, community members insist that violent acts like the murder of Mejía Orellana often take place with impunity.

U.S. Representatives Jim McGovern (MA), Sam Farr (CA) and Janice Schakowsky (IL) released a statement calling on the Honduran authorities to immediately implement protective measures for Radio Progreso and ERIC employees and to carry out a thorough investigation of the murder of Mejía Orellana to determine both material and intellectual authors of this crime and to bring them to justice.

Nicholas Napolitano, assistant for social ministries for the Maryland, New England and New York Provinces said of the murder, “During this time of Holy Week, let us remember to keep Carlos Mejía Orellana, his family and friends, and the Jesuits and collaborators at Radio Progreso and ERIC in our prayers.”

Those wishing to take action in response to Mejía Orellana’s murder are encouraged to contact the Honduras Desk Officer at the U.S. State Department (Kelsey Cambronne, 202-647-3505) and ask officials to: