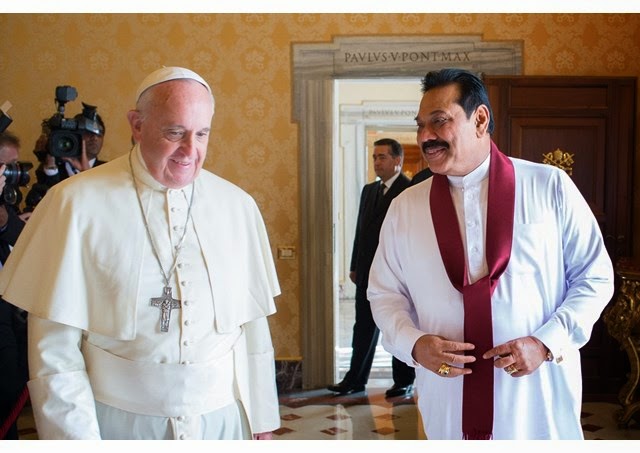 “At the first blow of His thundering sword, the mountains and all Nature will tremble in terror, for the disorders and crimes of men have pierced the vault of the heavens. Paris will burn and Marseilles will be engulfed. Several cities will be shaken down and swallowed up by earthquakes. People will believe that all is lost. Nothing will be seen but murder, nothing will be heard but the clash of arms and blasphemy Our Lady of La Salette 19 Sept. 1846 (Published by Mélanie 1879)

Now as was posted many times before on this blog we are now in the thirty-five year period of promised chastisements. The start of this 35 year period as best I can guess was Midnight January 1st 2010. Since then many bizarre events have unfolded. More horrible events are to follow. Today is just another example of a bizarre event unfolding involving up to 500 deaths in Sri Lanka - all due to the wickedness that is Pope Francis. God will punish the lost of us because of the sins of the clergy -especially Pope Francis as Our Lady of La Salette said would happen.

To follow upcoming punishments please follow the actions of Pope Francis - as has been the pattern in his pontificate anytime the Pope does something that gets God anger up you should in a few days or weeks or even a few months to expect a punishment or two sent by the hand of God to punish the lot of us to wake us up to the evil that is Pope Francis. Most of you are slow to catch on. But the punishments will be so great and numerous that many of you will demand the removal of Pope Francis from the Ship of Peter - just like in Jonah. Once the Pope is thrown overboard, the restoration of all things in Christ begin in earnest.

Here is the story from BBC


About 100 people are feared dead following a landslide in central Sri Lanka, the government says. The landslide, which came after heavy monsoon rains, engulfed about 140 houses in Badulla district. Ten bodies have so far been found but the rescue efforts have been suspended for the night. Bad weather is also hampering the rescue operations. Heavy rain has hit much of the country over the past few weeks. Mudslide warnings had been issued for many areas, The deadly mudslide hit the Meeriyabedda tea plantation near the town of Haldummulla, about 200 km (120 miles) east of the capital Colombo, on Wednesday at 07:30 local time (02:30 GMT). "More than 100 people are believed to have died," Disaster Management Minister Mahinda Amaraweera told Reuters news agency. "We have suspended the rescue operations because of darkness and inclement weather. There is also a threat of further landslides." 'Thirty feet of mud' BBC Read More>>>>>>

I will post the complete post originally published on Pope Francis The Destroyer Blog on the Feast of St. Francis 2014:

Radical Buddhists met in Sri Lanka to form an alliance against Islam on September 30th:


A Myanmar Buddhist monk and a Sri Lankan ultranationalist both known for campaigning against Muslims signed an agreement on Tuesday to work together to protect Buddhism, which they say is being challenged worldwide. Ashin Wirathu leads the fundamentalist 969 movement that has been accused of instigating deadly violence against minority Muslims in Myanmar. He was a special invitee Sunday at a rally of Bodu Bala Sena, or Buddhist Power Force, which also has been accused of instigating violence and claims minority Muslims are trying to take over Sri Lanka by having more children, marrying Buddhist women and taking over businesses. "The Buddhist society of the world has awoken to the ground realities of subtle incursions taking place under the guise of secular, multicultural and other liberal notions that are directly impacting on the Buddhist ethos and space," the agreement said. To achieve their goals, the groups agreed to raise their voices against political or religious groups that "jeopardize Buddhist values," linking Buddhist thinkers and activists and taking "collective action" when their members are threatened by anti-Buddhist forces. ABC Read More>>>>

The Buddhist nationalists met on the Feast of St. Jerome - the same St Jerome that Pope Francis accused of causing 1632 years of division with his translation of the Bible - the Vulgate & wicked Pope Francis claims that a new modern day ecumenical version of the Bible will heal those divisions:


The preparation of an inter-confessional version is a particularly significant effort, if one thinks how much the debates on Scripture influenced the divisions, especially in the West. Pope Francis  Read More Here>>>>>

So I would image that some day soon St Jerome will pay a visit to the heretic Pope to take vengeance on the heretic for his wicked dismissal of St. Jerome's holy work.

As for another St. Jerome connection to Sri Lanka is the religious order founded by a saint named after St Jerome -his name is Saint Jerome Emiliani and he founded the religious order Ordo Clericorum Regularium a Somascha, abbreviated as C.R.S. and known as Somascan Fathers, they have missions in Sri Lanka, see their Website Here>>>>

Pope Francis the heretic and a further connection with the saint name after St Jerome was during the disastrous RIO WYD when the heretic Pope prayed in the small church named after Saint Jerome Emiliani - what did the Pope pray? Was it answered? Will it be answered in a way that the Pope does not desire? Here is the story of his visit Read Here >>>>>

Pope Francis is not going to get away with publicly dismissing the Latin Vulgate of St Jerome and publically accusing the work of St Jerome of causing division.

I say again, may St Jerome be avenged on the wicked Pope Francis!

Here is the story of the visit between the Pope & the President of Sri Lanka:

During the cordial discussions, the Parties focused on the country’s current situation, with particular reference to signs of social and economic improvement, and conveyed their hope that solutions corresponding to the legitimate expectations of all citizens may be found.

In this context, the Parties expressed their hope that the Holy Father’s upcoming visit to Sri Lanka may be welcomed as a sign of closeness to the Sri Lankan population and may encourage those who work for the common good, reconciliation, justice and peace.

Many in Sri Lanka will soon suffer because of this wicked Pope. What form will the punishment take?

and of course if the above four are not sent to Sri Lanka we have these guys to punish Sri Lanka:

Not a hair on the head of the heretic pope will be disturbed - but many souls in Sri Lanka will be punished because of the sins of heretic Pope Francis and the wicked churchmen.....