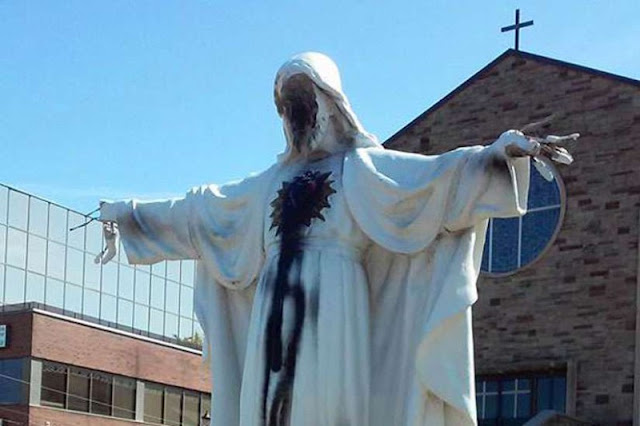 Work Of A Muslim Faggot

What drove this moron to commit such a heinous crime? 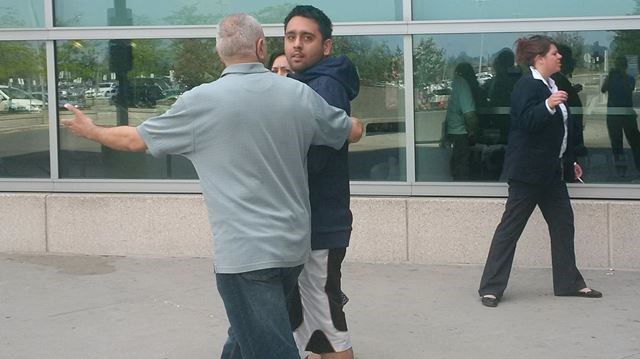 MISSISSAUGA, ONT. - A 22-year-old Mississauga man has been charged in connection with alleged hate crimes committed at St. Catherine of Siena Church and its neighbouring elementary school over the past two months.

Iqbal Hessan was reportedly arrested in the early hours of May 26 on the Mississauga school’s grounds, though police would not confirm this. Hessan faces five counts of mischief over $5,000, and break, enter and commit indictable offence. A bail hearing was held later that day.

On May 20, the Sacred Heart of Jesus statue that stands in front of the church was covered in black paint and the fingers of its outstretched arms were broken off. Behind the church, graffiti with the words “There is no Jew God” was scrawled across the brick wall along with a drawing of a face labelled “Jewsus.”

It was the third time the church has been targeted. On April 9, surveillance footage caught a young man breaking into the church, ripping pages of the Sacramentary book on the altar and throwing them at the tabernacle. He is then seen stealing one of the church’s amplifier speakers.

On May 17, a drawing of a hand gesturing with the middle finger was found spray painted on the front steps of the church. And on May 25, graffiti was sprayed on the school walls.

But out of the vandalism has come a new sense of community. When news spread, the parish community and its neighbours began working together to get the church back to its original shape.

Michelle Medeiros was driving down Hurontario Street on May 21 when she noticed the Sacred Heart of Jesus statue marked with black paint. She stopped, took photos of the damage and posted them on Facebook.

The photo album has been shared more than 600 times on Facebook. Comments from community members have poured in.

On May 22, two days after she posted the photos, Medeiros launched a crowdfunding campaign on GoFundMe.com to help support the parish. The campaign’s target goal is $10,000 to replace the statue and install more lights around the front lawn. So far, the campaign has raised $750.

“A lot of angry people are pointing fingers right now,” said Medeiros. “Some people are very, very upset because it is their church... they just want for whoever it is to get caught. I’ve had a lot of people asking me for friend requests... just to connect with me, talk to me, if I had any more information.”

Medeiros is not a parishioner of St. Catherine of Siena. She goes to Cristo Rei Catholic Church, a nearby Portuguese parish. But because she drives around the area all the time, she had seen the vandalism and damage over the past two months.

“I’ve seen everything happening and no one’s been doing anything so I said enough is enough,” said Medeiros.

“We received many phone calls and support from parishioners,” said pastor Fr. Camillo Lando. “We pray that these evil actions be overcome with forgiveness and much love.”

Support has come from a number of different faith groups. Local Muslim group Mississauga/Toronto/GTA Pakistanis Against Terrorism has launched a petition in solidarity with St. Catherine of Siena on Change.org. Accompanying the petition, the group published a letter calling the hate crimes toward St. Catherine of Siena Church “most deplorable and hateful” and that the group stands in solidarity with the community.

“It is always disheartening to see places of worship desecrated in a violent and hateful manner,” said Mostyn. “We stand in solidarity with the church against this despicable act that has targeted the Catholic community of Peel.”

The church and school community was to hold a prayer service in front of the Sacred Heart statue on May 28.

The Archdiocese of Toronto sent a notice on May 21 reminding parishes to stay vigilant and to exercise proper safety precautions.