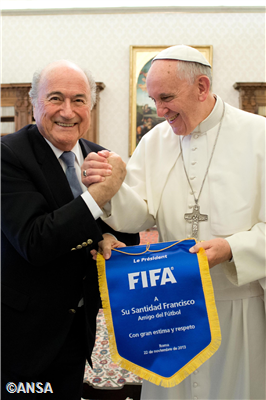 La Voz del Pueblo: What are the worst evils that beset the world today?

Pope Francis: Poverty, corruption and human trafficking. I can be wrong with the statistics, but what will you tell me if I ask you: When it comes to spending, what thing in the world comes after food, clothing and medicine? The fourth is cosmetics and the fifth are pets. That is serious. Pet care is like love that is somewhat programmed; that is, I can program the loving response of a dog or a little cat, and I do not need to have the experience of love with human reciprocity. I am exaggerating, so do not take it literally, but it is to make you think. Rorate Caeli

27 May 2015
FIFA Officials Arrested at Zurich Hotel:
FIFA president Sepp Blatter has promised to kick corrupt officials 'out of the game' after U.S. prosecutors today laid bare widespread allegations of rampant corruption at football's governing body. Blatter described it as a 'difficult time for football' after officials today lined up to detail a case in which they claim to have exposed complex money-laundering schemes, found millions of dollars in untaxed incomes and tens of millions in offshore accounts held by FIFA officials. In a statement released this evening, Blatter said: 'This is a difficult time for football, the fans and for FIFA as an organisation. We understand the disappointment that many have expressed and I know that the events of today will impact the way in which many people view us. Daily Mail Read More >>>>>> 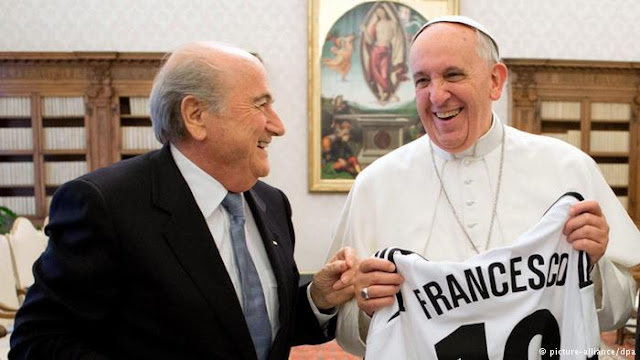 27 May 2015
Statement by FIFA President Blatter:

This is a difficult time for football, the fans and for FIFA as an organisation. We understand the disappointment that many have expressed and I know that the events of today will impact the way in which many people view us.

As unfortunate as these events are, it should be clear that we welcome the actions and the investigations by the US and Swiss authorities and believe that it will help to reinforce measures that FIFA has already taken to root out any wrongdoing in football.

While there will be many who are frustrated with the pace of change, I would like to stress the actions that we have taken and will continue to take. In fact, today’s action by the Swiss Office of the Attorney General was set in motion when we submitted a dossier to the Swiss authorities late last year.

Let me be clear: such misconduct has no place in football and we will ensure that those who engage in it are put out of the game. Following the events of today, the independent Ethics Committee – which is in the midst of its own proceedings regarding the awarding of the 2018 and 2022 FIFA World Cups - took swift action to provisionally ban those individuals named by the authorities from any football-related activities at the national and international level. These actions are on top of similar steps that FIFA has taken over the past year to exclude any members who violate our own Code of Ethics.

We will continue to work with the relevant authorities and we will work vigorously within FIFA in order to root out any misconduct, to regain your trust and ensure that football worldwide is free from wrongdoing.  FIFA President Sepp Blatter 27 May 2015 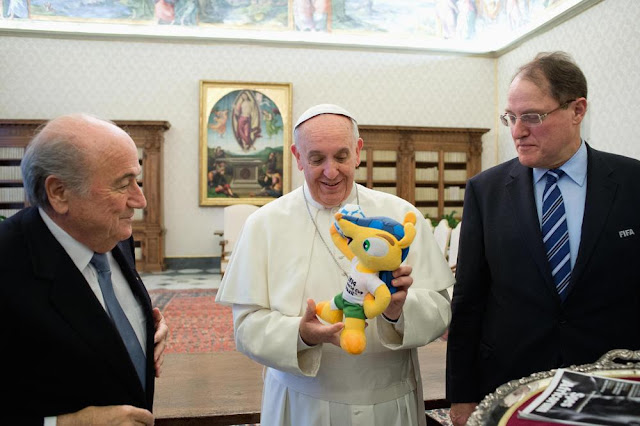 Blatter took time out of his busy schedule to squeeze in a visit to Pope Francis in Rome along with members of the Italian and Argentine rugby teams.

Blatter said he responded to the pope’s request for FIFA to help the favelas of Rio de Janeiro during the 2014 World Cup, with a promise to ‘do what we can.’

That’ll be nothing then.

Francis, a longtime member of the San Lorenzo club in Buenos Aires, now has another football shirt to add to his collection.

“We spoke the same language and it was language of football,” Blatter said. “It was really a meeting between two sportsmen and two football fans.”

And, it should be added, a meeting between two men who have absolute authority over their respective flocks.

Meanwhile, perhaps humbled by his encounter with God’s representative on earth Blatter also chose the occasion to speak out against the abuse of migrant workers in Qatar.

“We deplore what happened there,” Blatter said, whilst also noting that the responsibility for the workers’ fate lies not with FIFA, but with the major European companies building Qatar’s World Cup infrastructure.

“The big companies working there, they are all European,” Blatter said. “The constructor is also responsible for his workers.”

“It was political pressure from European countries to bring this World Cup to Qatar because there was so many economic interests.

“Two of these countries that made pressure on the voting men in FIFA were France and Germany. This is established. This is not new information.

“It’s easy to say all the responsibility lies on FIFA. No, we are part of this responsibility. We are now monitoring the situation and we will come back to it.”