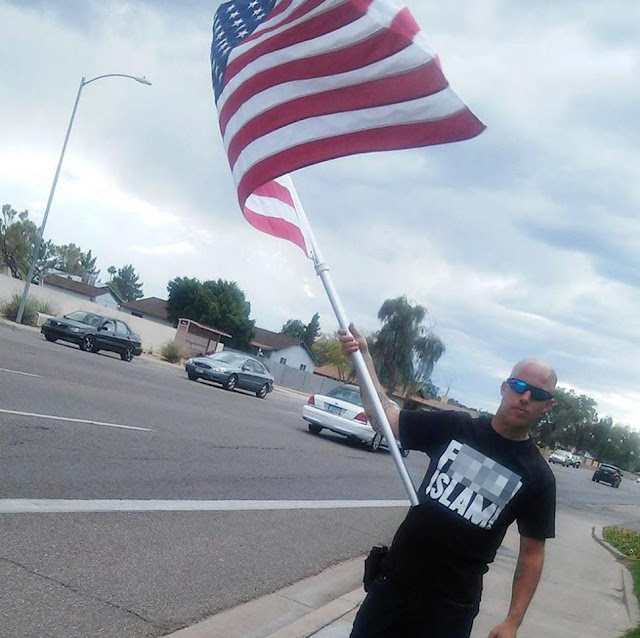 The ex-Marine who organized an anti-Muslim rally outside the Islamic Community Center of Phoenix Friday evening said he’s going into hiding after receiving several death threats. “This is proof tyranny is in America,” said Jon Ritzheimer, revealing he's come under siege since taking to Facebook to organize the event. Up to 500 protesters gathered in 100-degree heat — some clutching assault rifles, American flags and placards — in the latest flashpoint in the U.S. anti-Islam movement. Ritzheimer planned the protest, billed as "Freedom of Speech Rally," in response to an ISIS-inspired attack outside a controversial Prophet Muhammad cartoon contest May 3 in Texas. Two gunmen were shot dead by SWAT team members as they attempted to storm the Curtis Culwell Center in Garland, Texas, an event organized by anti-Islamic activist Pamela Geller. But now Ritzheimer claims he's been targeted by terrorists. NY Daily News Read More>>>>>

What do Atheists, Muslims & Evangelicals have in common?

What do Atheists, Muslims & Evangelicals have in common?

Hatred of the Crucifix of Jesus Christ Crucified.

Do you really think that gun lovin' Evangelicals are gonna defeat Islam?

Look you can't have both - you can't hold a crucifix in one hand and a gun in the other.

The great leader of the holy militia of the Holy Spirit shall overcome the world, and shall possess the earth so completely that no king or lord shall be able to exist, except that he belongs to the sacred host of the Holy Ghost. These devout men shall wear on their breasts, and much more within their hearts, the sign of the living God, namely, the Cross.

"The first members of this holy order shall be natives of the city where iniquity, vice and sin abound. However, they shall be converted from evil to good; from rebels against God they shall become most fervent and most faithful in His divine service. That city shall be cherished by God and by the Great Monarch, the elect and the beloved of the Most High Lord. For the sake of that place all holy souls who have done penance in it shall pray in the sight of God for that city and its inhabitants. When the time shall come of the immense and most right justice of the Holy Spirit, His Divine Majesty wills that such city become converted to God, and that many of its citizens follow the great prince of the holy army. The first person that will openly wear the sign of the living God shall belong to that city, because he will through a letter be commanded by a holy hermit to have it impressed upon his heart and to wear it externally on his breast.

"That man will begin to meditate on the secrets of God, about the long visitation which the Holy Spirit will make and the dominion that he will exercise over the world through the holy militia. O! happy man, who shall receive from the Most High the greatest privileges! He will interpret the hidden secrets of the Holy Ghost, and he shall often excite the admiration of men by his revealed knowledge of the internal secrets of their hearts. Rejoice, my Lord, because that Prince above other princes, and King over other kings, will hold you in the greatest veneration, and after having been crowned with three most admirable crowns, will exalt that city, will declare it free, and the seat of the Empire, and it shall become one of the first cities in the world...

"He shall be a first-born son; in his childhood he will be like a saint; in his youth, a great sinner; then he will be converted entirely to God and will do great penance; his sins will be forgiven him, and he will become a great saint.

"He shall be a great captain and prince of holy men, who shall be called "the holy Cross-bearers of Jesus Christ," with whom he shall destroy the Mahometan sect and the rest of the infidels. He shall annihilate all the heresies and tyrannies of the world. He shall reform the church of God by means of his followers, who shall be the best men upon earth in holiness, in arms, in science, and in every virtue, because such is the will of the Most High. They shall obtain the dominion of the whole world, both temporal and spiritual, and they shall support the Church of God until the end of time.

"God almighty shall exalt a very poor man of the blood of Emperor Constantine, son of St. Helena, and of the seed of Pepin, who shall on his breast wear a red Cross. Through the power of the Most High he shall confound the tyrants, the heretics, and infidels. He will gather a grand army, and the angels shall fight for them; they shall kill all God's enemies.

"From the beginning of the world, after the creation of man, and to the end of human generations, there have been and there shall be seen wonderful events upon the earth. Four hundred years shall not pass when his Divine Majesty shall visit the world with a new religious order much needed, which shall effect more good among men than all other religious institutions combined. This religious order shall be the last and the best in the Church; it shall proceed with arms, with prayer, and with hospitality. Woe to tyrants, to heretics, and to infidels, to whom no pity shall be shown, because such is the will of the most high! An infinite number of wicked men shall perish through the hands of the Cross-bearers, the true servants of Jesus Christ. They shall act like good husbandmen when they extirpate noxious weeds and prickly thistles from the wheat field. Those holy servants of God shall purify the earth with the deaths of innumerable wicked men.

"How spiritually blind are those persons who, having no thought about things of God, fix their end in earthly objects. Wretched men! by far worse than the very beasts which are guided by their sense, because they cannot reason, they become brutalized. Hence they shall ever be in confusion. Let, therefore, the princes of this world be prepared for the greatest scourges to fall upon them. But from whom? First from heretics and infidels, then from the holy and most faithful Cross-bearers elected by the Most High, who, not succeeding in converting the heretics with science, shall have to make vigorous use of their arms. Many cities and villages shall be in ruins, with the deaths of an innumerable quantity of bad and good men. The infidels also shall fight against Christians and heretics, sacking, destroying, and killing the largest portion of Christians. Lastly, the army, styled "of the Church," namely, the holy Cross-bearers, shall move, not against Christians or Christianity, but against those infidels in pagan countries, and they shall conquer all those kingdoms with the death of a very great number of infidels. After this they shall turn their victorious arms against bad Christians, and destroy all the rebels against Jesus Christ. These holy Cross-bearers shall reign and dominate holily over the world until the end of time... But when shall this take place? When crosses with the stigmas shall be seen, and the crucifix shall be carried as the standard... This standard will be admired by all good Catholics; but at the beginning it will be derided by bad Christians and by infidels. Their sneers shall, however, be changed into mourning when they shall witness the wonderful victories achieved through it against tyrants, heretics, and infidels... That man (the leader of the Crucifers) will be a great sinner in his youth, but like St. Paul he will be drawn and converted to God. He shall be the founder of a new religious order different from all the others. He shall divide it into three classes, namely: (1) Military knights, (2) Solitary priests, (3) most pious hospitalers. This shall be the last religious order of the Church, and it will do more good for our holy religion than all other religious institutes. By force of arms he shall take possession of a great kingdom. He shall destroy the sect of Mahomet, extirpate all tyrants and heresies. He shall bring the world to a more holy mode of life. There will be one fold and one Shepherd. He shall reign until the end of time. In the whole earth there shall be only twelve kings, one emperor, one pope. Rich gentlemen shall be few, but all saints."