WHO ARE YOU GONNA LISTEN TO? GARY VORIS OR WILLIAM OF OCKHAM? ALL CATHOLICS ENDOWED WITH REASON MUST BE DEEMED IN ONE SENSE OR ANOTHER TO BE QUALIFIED OPPONENTS OF A HERETIC POPE. - WILLIAM OF OCKHAM Dial. 7 CHP. LXXII 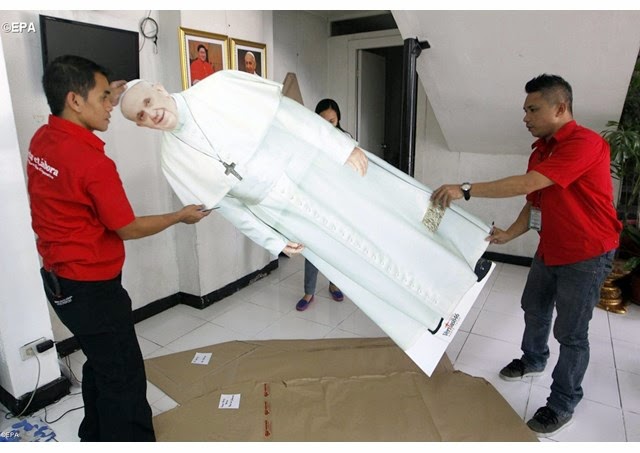 Student: We have frequently mentioned the opponents of a heretic pope. I would beseech you to deal with one question concerning these, namely, which persons are to be considered as qualified to oppose a heretic pope.

Master: The answer is that all catholics endowed with reason must be deemed in one sense or another to be qualified opponents of a heretic pope.

Student: This reply is so general that it hardly touches on what I have in mind. For I know that since a heretic pope is the enemy of all the faithful, all believers endowed with reason are in some way to be considered his qualified opponents. However, it is proper that there should be some among them who would act as leaders, directors, and heads of the rest, and it is of such individuals that I understood my proposed question.

Master: The answer is that they should be considered qualified to be leaders and heads of the heretic pope's opponents who are pre-eminent in virtues, learned in the sacred letters, experts in difficult tasks, and possessing temporal power. For one can oppose a heretic pope in two ways: namely, by physically attacking him with material arms, if this is convenient, and by spiritually rejecting both his person and his errors by authorities and reasons. In the first instance, those possessing temporal power must be considered qualified to oppose a heretic pope. In the second instance, it is the learned in Sacred Letters who are qualified to be the leaders and principal opponents of a pope stained by heretical wickedness. But pre-eminence as to virtues and practical experience seem convenient to both categories of opponents in order that they may attack the heretic pope and his accomplices as and when convenience dictates.

Student: Again, this response is more general than I would like. Hence I pray that you follow some opinion in listing certain special prerogatives which it is proper for the opponents of a heretic pope to possess in the highest degree in order to be considered fit to perform their task.

Master: There are innumerable special prerogatives of this kind.

Student: Mention a few of them.

Master: There are those who say that in order that someone may be considered a fit opponent of a heretic pope, it is expected that he be firmly grounded in the truths which contradict the errors professed by the heretic pope, namely, that no reason would sway him from these truths. Hence, he must not submit his stated convictions as to these truths to the correction of the pope, nor to the correction of a general council, nor to the correction of angels from heaven. But just as blessed Paul wrote to the Galatians, saying: "though an angel from heaven preach any other gospel unto you than that which we have preached unto you, let him be accursed", [Galatians 1:8] so ought every qualified opponent of a heretic pope say in his heart and utter verbally at the opportune moment: "were I myself, or the pope, or the general council, or the entire congregation of Christians, or the whole multitude of angels in heaven, to presume to preach, assert, or affirm the errors of a heretic pope, let each and every one be accursed". And that is why the qualified opponent of a heretic pope must not submit to someone's correction his assertions with respect to truths which contradict the errors of the heretic pope, because he has received, he holds, and he venerates these truths as given to him not by man, but by God, and God does not require correction. This point, they go on to say, eliminates the error of some interpreters who claim that every Christian must submit his faith to the correction of the most holy pope. They prove this claim by the example of blessed Jerome, who submitted his faith, which he had learned in the church, and in which he was educated, to the correction and judgement of the most holy pope. But the thinkers we are reporting say that this claim is erroneous, and even obviously heretical, a judgement they attempt to prove by examples and by reason. And first by the example of blessed Paul, who, as we read in Galatians 2, when he rebuked the pope (namely blessed Peter), in no sense submitted his assertion to the correction of the pope, but rather wanted the pope to submit to his own (Paul's) correction. [Galatians 2:11] Indeed he rebuked the pope so that the pope could correct himself as to a deviation committed in prejudice of evangelical truth. Secondly, they prove this judgement by the example of the Roman clerks who removed themselves in praiseworthy manner from communion with pope Anastasius II, and it is established that these clerks in no way submitted their assertion to the correction of the pope.

Student: What, then, did Jerome submit to papal correction.

Master: The answer is that Jerome submitted nothing absolutely (but only conditionally) to the correction of the pope, which his words openly declare when he states: "should we have affirmed something in our presentation thereof which is unlearned or perhaps lacking in caution, we desire to be corrected by you etc." It is inherently obvious that these words are conditional.

Student: It appears at least from the form of the words that Jerome conditionally submitted his faith, which he had learned in the church, to the correction of the pope. For he initially states: "this is the faith, most holy pope, which we have learned in the church", and afterwards he adds; "should we have affirmed etc."

Master: The answer is that although Jerome could have conditionally submitted his faith to the correction of the pope without danger (for a conditional statement affirms nothing; hence this conditional statement is true: "if something false is asserted in the Gospel it must be corrected"), nevertheless blessed Jerome had not intended in the cited words to submit his faith to the correction of the pope, but had intended to conditionally submit his exposition concerning the faith to the correction of the pope. Therefore his words should be interpreted as follows: "in our presentation thereof", that is, concerning its (namely the faith's) exposition and explanation, "should we have affirmed something which is unlearned, or lacking in caution, we desire to be corrected by you etc." This is similar to a commentator of the Gospel saying: "this is the gospel; should I have stated something badly in my exposition, I stand ready to be corrected".