Earthquake hits 90 miles north of Rome in the city of Norcia.

Here's the rub. Steve Skojec HATES La Salette. Why? Well the message takes attention away from Skojec himself. Skojec for those that don't know grew up under the wings of the monster Fr. Marcial Maciel Degollado, founder of the Legionaries of Christ. Maximin said that one day a monster will arise to disturb the peace of the Church and that monster is Marcial Maciel. Steve is a child of this monster. However Skojec does claim to have distance himself from this evil....

Why pick on Steve?

Well seems Steve has declared that Mélanie is insane, and Steve has influenced his followers with the same wicked opinion (as a matter of fact many demented Traditionalists are of the same mind as Steve on this)

Why does Steve do this?

Because Steve wants all the attention and he wants to be looked upon as a prophet.

Steve admits this himself:


The fact is, I'm in the attention business ~ Steve Skojec

And what better way to get all the attention from the coming doom, than to claim that the Message of La Salette is from a disturbed mind.

Steve went back to writing a piece about how he feels doom is coming.

Why does Steve have these feelings? Because Steve is a Prophet!

Mind you saner minds rely on the Words of the Mother of God to see what is about to happen.

Steve on the other hand relies on his "feelings".

Yea..Steve is sane because he has a following and Melaine is insane....see how this works? If you rely on the words of the Mother of God then your insane! but if you listen to the feelings of Steve Skojec well then your healthy sane and happy!

So what happened a few weeks after Skojec wrote this piece Depending on Doom?

Here is Hillary White's first hand account of the Earthquake:

I'm fine, as are all the monks and guests and as far as I know, all the Nursini. Picked the worst possible day to not bother recharging my phone. I've had a dozen text messages, some from very far away, and I can't respond to any of them. Sorry if I gave people a fright.

I've never in my life heard such a terrifying noise. As a child of the Cold War, the first thing that popped into my sleep-addled brain was ... well... there was no flash, so…

That thought changed swiftly to "Oh, it's an earthquake." Then I remembered where I was and that in this part of the world earthquakes are a very bad thing. I was curled into a ball with my arms over my head and praying the roof didn't come down on me. But my house is stone and is well out of town, and survived the big quake of '97, so I was fine.

By the time I'd checked the house and the kitties (they're fine too, slept through the whole thing,) there were already cars heading down the hill to town. There was one really big aftershock, and I decided to go down too. When I got to the piazza there were already a couple hundred people there, including all the monks. We were asked to stay away from the church and the monastery, and there were quite a few very scary aftershocks. During one, the stone of the piazza felt a bit like standing on a trampoline. We all gathered in the middle of the piazza while I watched the statues and the big stone cross on top of the Basilica waving back and forth, but nothing more fell. We've been having aftershocks pretty steadily.

No one was hurt as far as we know so far in Norcia, and the damage in town was mostly superficial. The fire department shut the gas off all over town, so there were no fires.

Of course, since then we've learned that other towns, particularly Accumoli and Amatrice have been hit very much worse and that people have died and are missing. Esp. please pray for the people they've found in Accumoli who are shouting for help but are buried.

The monks are all OK. There was a fair bit of damage to the plaster work in the church, much of which is now on the floor, and the monastery will have to be inspected for damage. There are engineers in Italy who specialize in this work.

Laudes was sung in the crypt church this morning, because it was thought to be the safest place. Indeed, it’s stone vault design has withstood earthquakes since the 2nd century BC. I must say, that's an experience I won't forget soon: singing the Divine Office of Laudes for the Feast of St. Bartholomew. No one skipped a beat when the aftershock shook us during the Benedictus.

We've been feeling aftershocks pretty steadily, but so far no really big ones since about 5:30 am. We think it's probably mostly over as I write this at eight thirty am. The quake was at 3:35.

The town now has the job of inspecting all the public buildings to assess the damage. But people mostly stayed home. There were only a couple hundred people in the piazza. Of course, structural damage is going to be harder to see, but for the moment, the monks are back in their monastery. Source


“What countries shall be preserved from such calamities? Where shall we go for refuge? I, in my turn, shall ask, What is the country that observes the commandments of God? What country is not influenced by human fear where the interest of the Church and the glory of God are at stake? (Ah, indeed! What country, what nation upon earth?) In behalf of my Superior and myself, I have often asked myself where we could go for refuge, had we the means for the journey and for our subsistence, on condition that no person were to know it? But I renounce these useless thoughts. We are very guilty! Mélanie

Hillary, you should have been saying your prayers....Lauds 3 AM 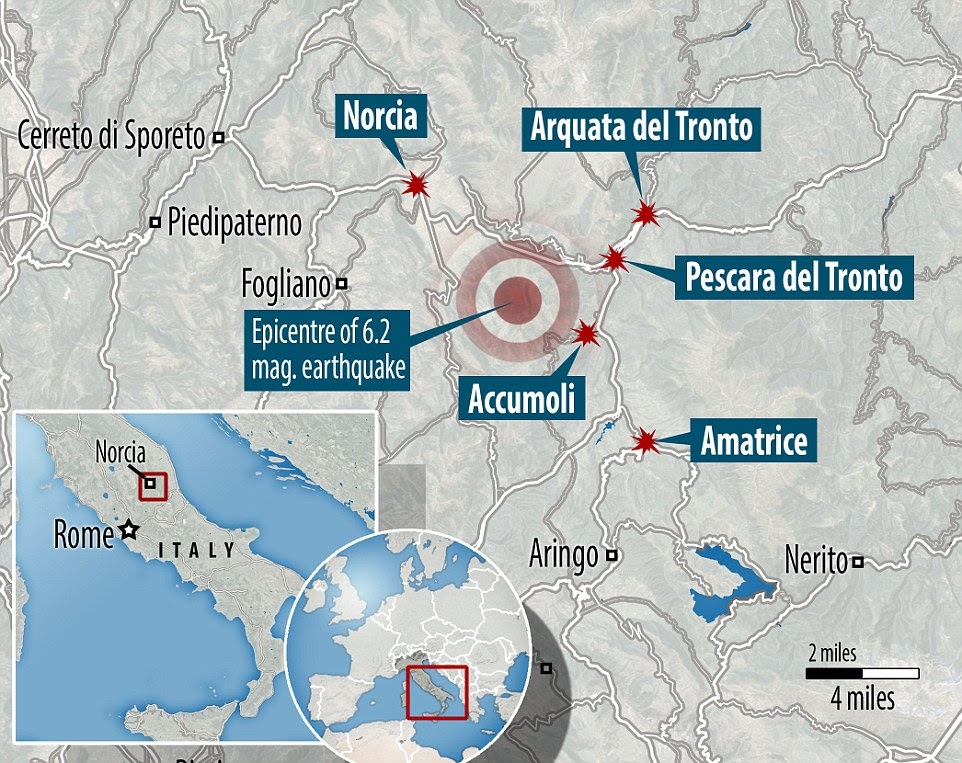 'We can hear children screaming in the rubble': Desperate hunt for survivors as rescue workers dig with their bare hands after 6.2 magnitude earthquake rocks central Italy killing at least 50 and leaving 150 missing

The scale of the devastating Italian earthquake was laid bare this morning as shocking pictures and terrifying eyewitness accounts revealed how four towns were almost wiped off the map in just a matter of seconds. At least 50 people were killed, including two babies, and 150 people are missing, believed to be trapped under rubble after the 6.2-magnitude quake struck at 3.30am local time while villagers slept in their beds. Today rescuers spoke of hearing children's screams from the rubble and locals were spotted frantically digging with their bare hands to try and save loved ones. The quake which devastated the Umbrian mountainside towns and villages of Amatrice, Accumoli, Arquata del Tronto and Pescara del Tronto was so powerful that it even rocked buildings in the centre of Rome more than 100 miles away and was felt as far away as Croatia. Survivors today described 'apocalyptic' scenes in towns and villages near the city of Perugia - the capital of the tourist-packed Umbrian region, which is especially popular with British holidaymakers. The quake's epicentre was near Norcia in Umbria, about 105 miles north east of Rome, and falling bridges and landslides meant some areas are still cut off with emergency teams only able to get there on foot. The mayor of Accumoli, Stefano Petrucci, said this morning: 'My town isn't here anymore' as people were carried out of ruined buildings on stretchers and people desperately searched the debris for survivors or sobbed as they inspected their own ruined homes. Source 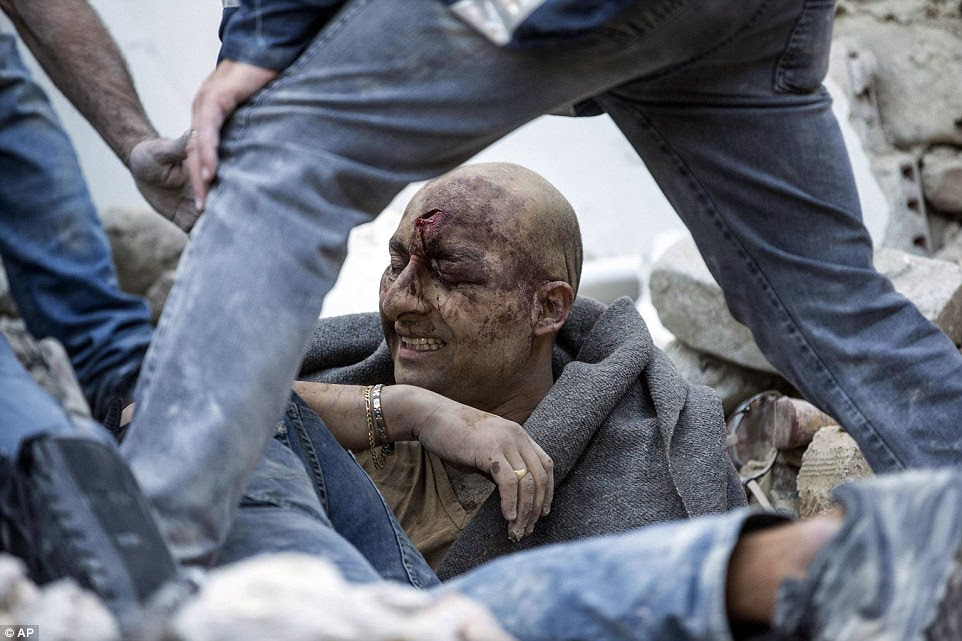 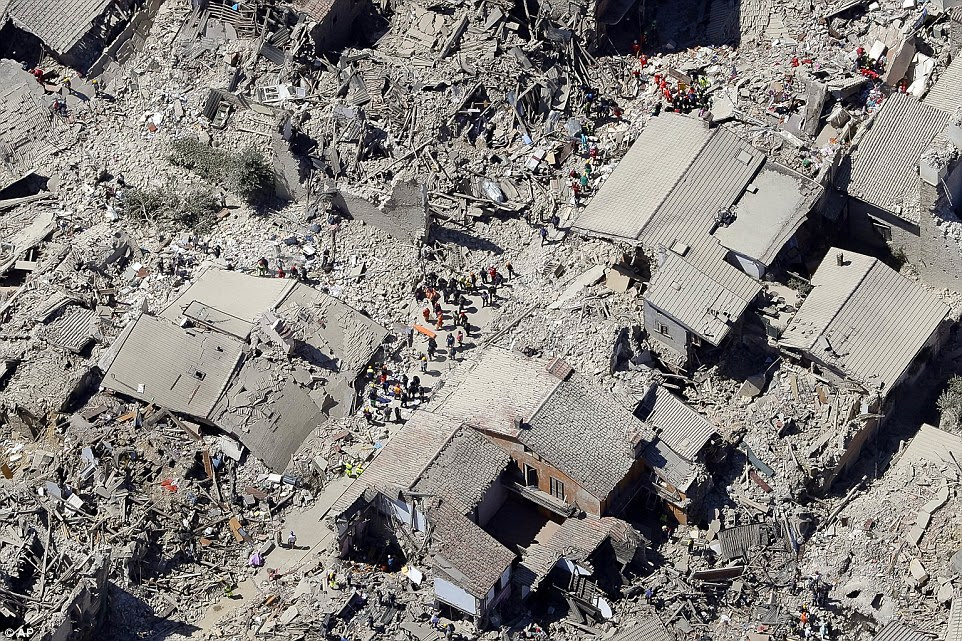 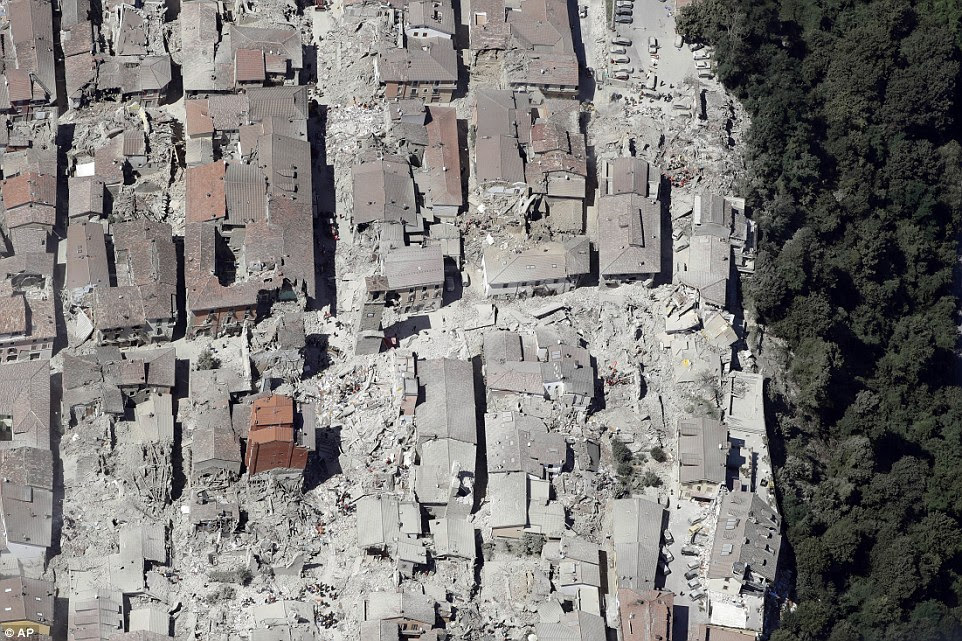 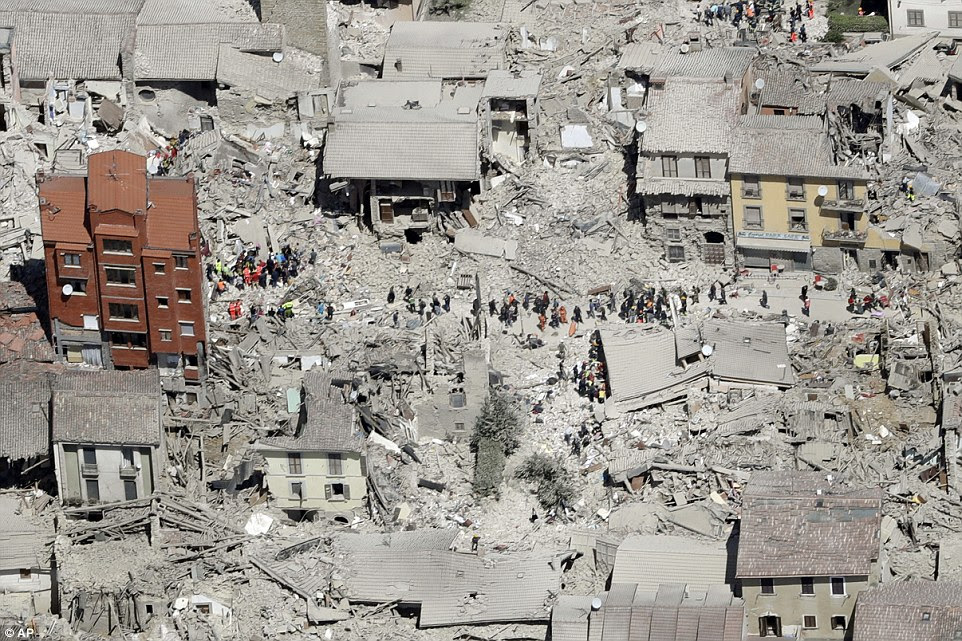 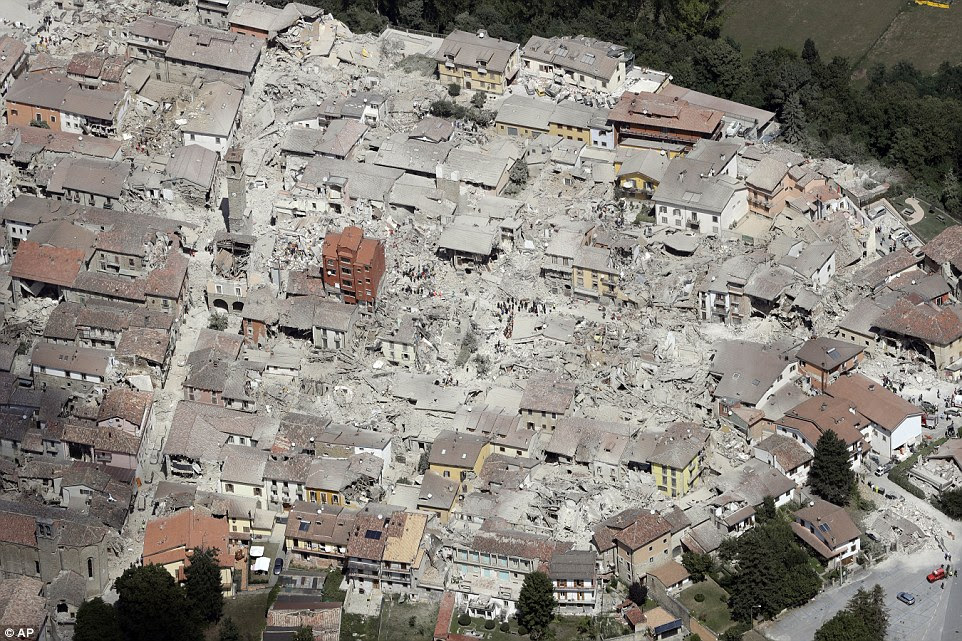 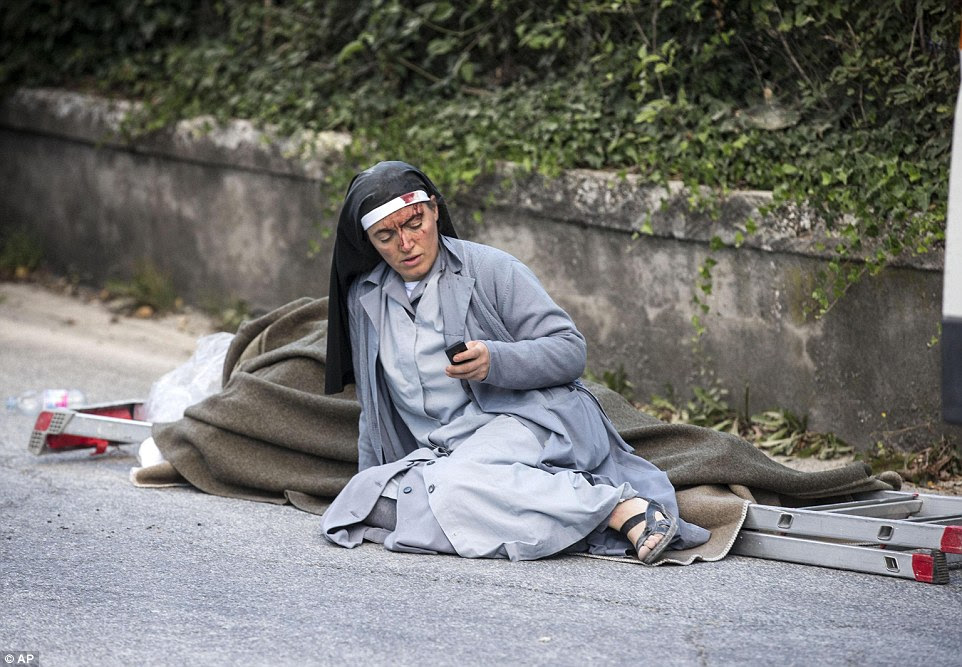