Duterte Hearing Voices In The Air! 'No More Cursing, Or I'll Bring This Plane Down,' Duterte Hears God Say 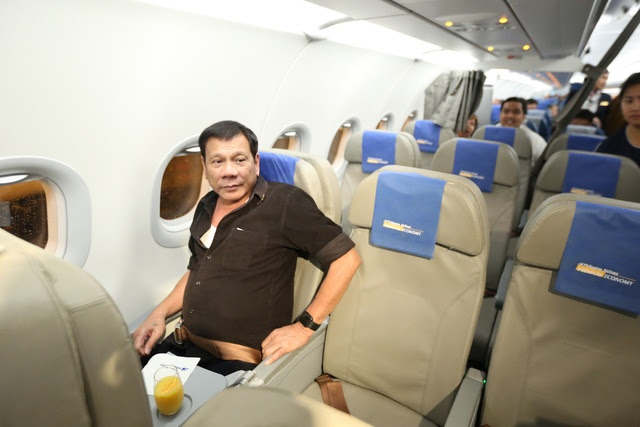 Voices will be heard in the air. Men will beat their heads against walls, call for their death, and on another side death will be their torment. Blood will flow on all sides. Our Lady of La Salette 19 Sept. 1846 (Published by Mélanie 1879)

This is what happens when a catholic goes rogue and turns into an Apostate!

Philippine President Rodrigo Duterte has made a solemn promise: no more swearing.

Duterte, who famously cursed the pope and used a slang term that translates as “son of a whore" in reference to President Obama, was flying back from Japan late Thursday, looking at a vast expanse of sky, listening to his colleagues snore, when he heard a voice say, “If you don’t stop epithets, I will bring this plane down now.”  “And I said, ‘Who is this?’ So, of course, ‘it’s God,’” he told Filipino journalists late Thursday.  “So, I promise God,” he continued, “Not [to] express slang, cuss words and everything. So you guys hear me right always because [a] promise to God is a promise to the Filipino people.” WP Read More>>>>>>>>>>

Duterte did not hear the voice of God.

Duterte heard the voice of a demon, because Duterte was violating the Laws of God by flying above the boundary established by the Blessed Trinity (29,050ft) which places Duterte in the Habitat of the Demons, and as punishment, God allowed a demon to whisper in the ear of Duterte.

Strange stuff, and it will get more weird.

Here, read from a Saint on where the Demons reside:

Summa Th. I EN Qu.64 a.4
Article: 4 Whether our atmosphere is the demons' place of punishment?