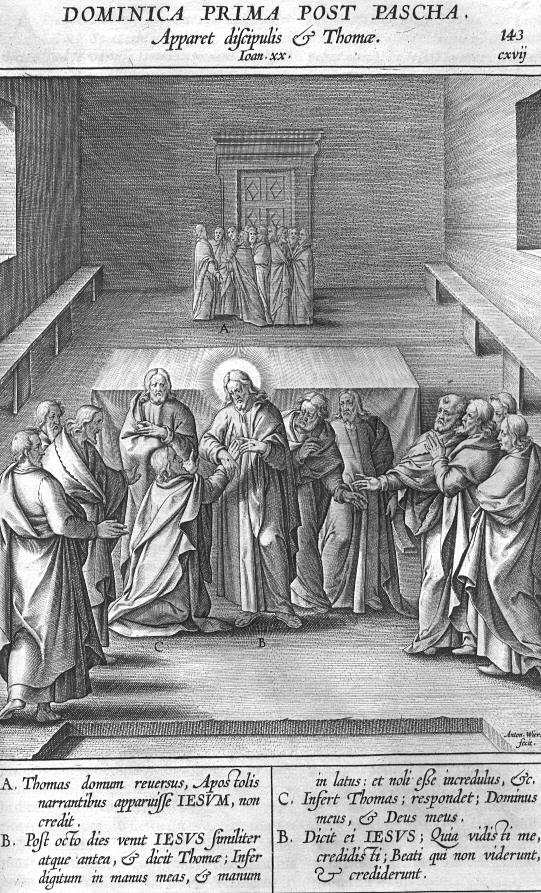 Upon the day of the resurrection of Christ in the Evening, when the doors were shut, the Apostles being all together (but only St. Thomas) expecting the resurrection of Christ, till the very last, and his appearing, unto them for their comfort, as they presumed he would, Christ came into the house where they were, after a miraculous manner, they knew not how, the doors being shut in, and standing in the midst of them, said Peace be unto you, and showed them the wounds of his hands, &feet; Thomas being absent, at that time, they told him of it, he, as it stems, having sequestered himself to much from their company grew so cold and incredulous, that he answered them thus: Unless I see him myself, and put my fingers intones wounds, and my hand into his side, I will not believe it: Eight days after Christ not willing to loose any one of his disciples, but only Judas the son of perdition (not him neither if he would have repented aright) appeared unto them again, Thomas being with them, saluted them with peace as before, showed his wounds as before, bid Thomas come & put his fingers into his wounds, and his hand into his side.

Thomas believed, and burst forth into these words: My Lord and my God, which was a perfect profession of his belief in Christ. Here we may consider how dangerous it is to be cold and incredulous, to sequester ourselves from good company and exercise of religion, wherein no doubt the Apostles were employed at that time, and much more if we be in company that is ill.

Likewise we may consider how good a shepherd Christ ism that will not lose one of his sheep, but seek them out, of they go astray, and bring them home upon his shoulders, of duty & mercy, as he did Thomas, yet suffereth them sometimes to go far astray for the greater benefit of others, as he did Thomas, of whom St. Gregory saith, that his incredulity at first and that which followed thereof, to wit his feeling and handling the wounds of Christ, and confessing him to be God, did confirm the Church in the belief of the resurrection of Christ, more then the credulity of the rest of the Apostles, not that we must or may do evil that good may ensue, but to teach us that evil being done, God sometimes turneth it to a greater good.

Afterwards Christ breathed upon his disciples, and said: As my Father sent me, so do I you: receive yes the holy Ghost, whose sins so ever ye forgive here on earth are forgiven in heaven, & whose ye retain are retained.

God when he had made Adam, a man of clay, he breathed into him the breath of a corporal life, here Christ breathed into his Apostles being but mortal men a spiritual life or power to forgive sins in the Sacrament of penance, but which they did not only live themselves as Adam did, but were able to administer life unto all posterity as Adam did, and so made them spiritual Adams to beget children to God, as Adam did to the world.

And though mortal men cannot of themselves forgive sins unless they have that power & life given unto them, no more then Adam, being a man of cat, could beget children till he had life breathed into him; yet having received the holy Ghost in the Sacrament of Orders as well as the Apostles, and sent of Christ as he was sent of his Father, they can; and is to the greater honor of God, that sendeth them, and the necessary good of the people, for whom they have it, and therefore Christ gave them this life and power over his mystical body his Church, not before his death, but after his death & resurrection to signify that he had ordained men, to wit his priests who by the Sacrament of penance, should raise us also from the death of sin unto a spiritual life of grace, & that he merited this for us, but his own death and resurrection.