No Visible Sacrifice Of The Holy Mass For The Manchester Bombing Victims Just A 10 Kilometre Run.... 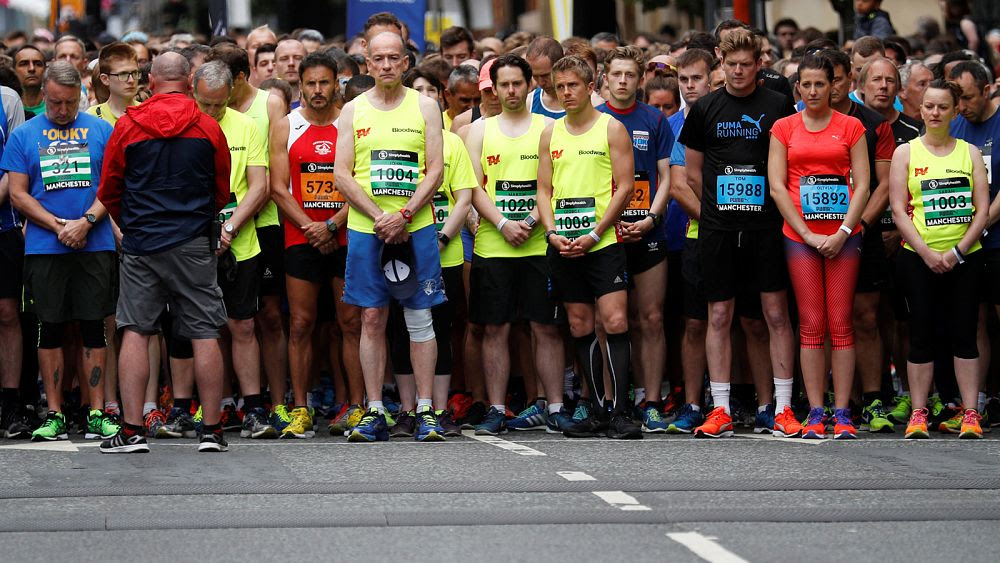 Before the starting whistle, a minute’s silence in memory of the victims and casualties of the suicide bomb that killed 22 at the Manchester Arena. This year’s Great Manchester Run may have been more subdued than usual, but runners turned out in their thousands, undettered by the attack on their city less than a week earlier. Mike Cricksley, who was running in a Batman costume, said: “It`s a bit of a strange day actually, it`s usually more upbeat and more buzz in the air but it`s a bit of strange, but I`m sure it’ll be okay.” Another runner, Rita Kelly, said: “We had to make a decision to fly over from Ireland, so we’re kind of feeling we are here, yes, it is an emotional run as well, I say. But you have to show that you are not afraid and we are looking forward to it. I hope it is going to be okay for everybody.” Source

The necessity of visible Sacrifice, and the end, or cause why it was instituted, and used.

Two things, have always been much recommended by God, and highly esteemed by men of all sect, and sorts, who firmly believed that there was a God who extended his providence over mankind; first the honor of God, and peace with him; and secondly unity, peace and society amongst themselves. And these two, have always been, chiefly maintained amongst men, by a particular, visible Sacrifice, first offered unto Go upon an Altar, as a scared sign of the invisible Sacrifice of their hearts unto him; and after eaten, or communicated amongst themselves. By offering visible Sacrifice upon an Altar unto God, they solemnly protected the sacrifice of their hearts unto him, publicly adored him with the honor of Latria, or divine worship, which is due only unto him; and visibly made profession of peace, unity, and society with him, and amongst themselves: and by eating of the same Sacrifice, which had been offered unto God, they ratified and established the same peace, and unity, as partakers of that meat, with they had offered unto God for a sacred sign of common union, as generally manifest by experience, in all sects, and sorts of people, of former ages, who firmly believed, there was a God, and that his Providence was not wanting in the government of mankind. Anonymus Eremita 1637