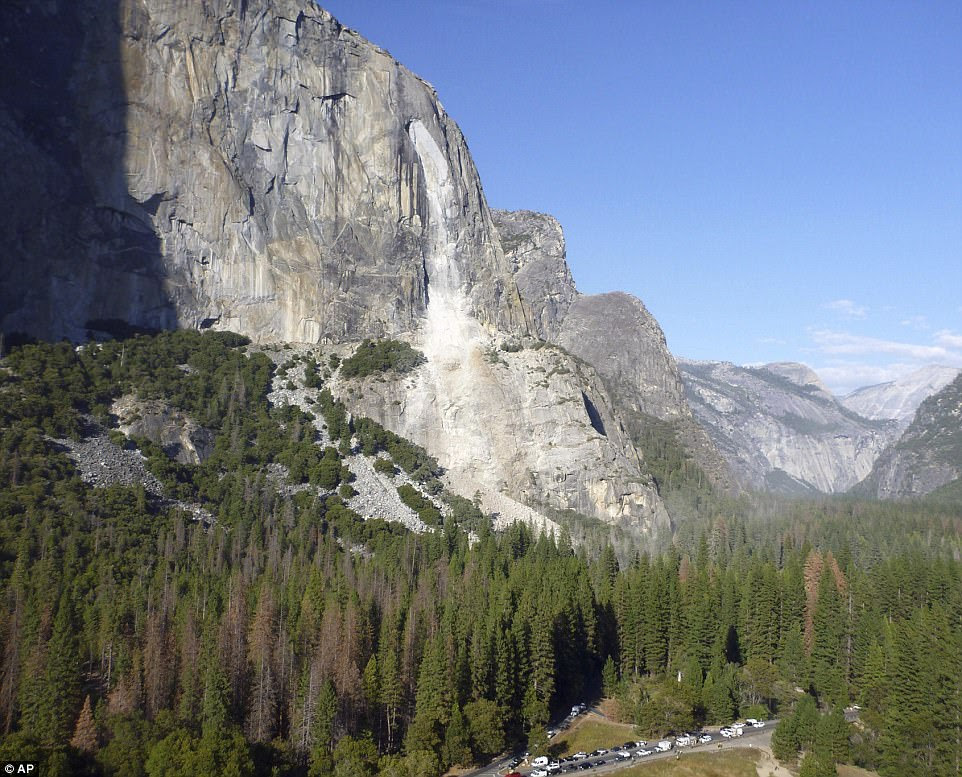 “At the first blow of His thundering sword, the mountains and all Nature will tremble in terror, for the disorders and crimes of men have pierced the vault of the heavens.Our Lady of La Salette 19 Sept. 1846 (Published by Mélanie 1879)

A massive hunk of rock fell off Yosemite National Park’s El Capitan on Thursday, a day after a rockfall in the same area of the granite monolith killed a British tourist and seriously injured his wife, park officials said.  One person was hurt in Thursday’s slide, though it was unclear if the individual was a climber or a motorist. Tourists were asked to use Southside Drive to exit Yosemite Valley, as the rockfall left Northside Drive closed.  “It could’ve been a lot worse,” said Ken Yager, president of the Yosemite Climbing Assn., who saw the aftermath of the rockfall. “From what I hear, we got really lucky.”  A rock the size of a golf ball could be fatal, he said, and he estimated Thursday’s fall was “10 times bigger” than the colossal chunk that broke off a day earlier.  “That anybody survived, it just blows my mind,” he said.  Yager was coordinating a park cleanup when he saw a dust cloud, from about a mile away, billowing from the formation. Immediately, his phone began buzzing as people tried to figure out what had happened and emergency crews rolled to the scene.  “After yesterday, I guarantee there’s no climbers climbing near that rock,” he said. “If they were, they’re crazy.”  On Wednesday, a sheet of granite the height of a 13-story building — about 130 feet long, 65 feet wide and in some sections 10 feet thick — separated from the rock face and dropped to the base of El Capitan, officials said.  A couple were apparently standing at the base of the cliff at the time of the crash. The man who was killed was identified Thursday as Andrew Foster, 32, of Wales, according to the National Park Service. His wife was airlifted to a hospital; her name has not been released. Source

"I protest highly against a different text, which people may dare publish after my death. I protest once more against the very false statements of all those who dare say and write First that I embroidered the Secret; second, against those who state that the Queen Mother did not say to transmit the Secret to all her people." Melanie
Email Post