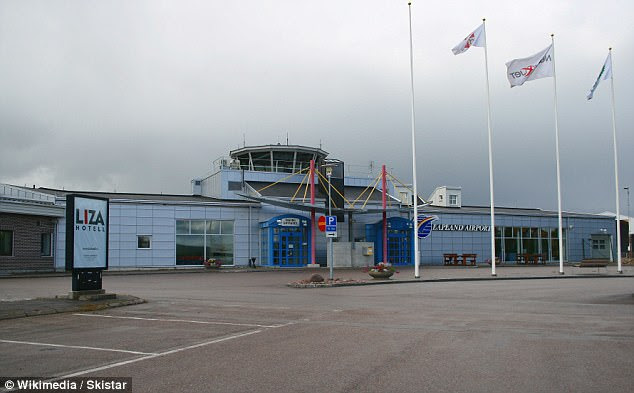 Jihadist Graffiti: "We will bring this plane down."

Passenger jet is SABOTAGED before it is due to take off in Sweden after person gains access to airport area
An attempt to sabotage a passenger aircraft as it lay parked in an airport hanger is being investigated by police. According to local police in the northern town of Gällivare, the break-in was discovered at around 5.30am on Monday, before its morning flight. Specialist officers have began examining the Nextjet plane to determine exactly what happened. Nextjet’s morning flights from Gällivare to Karamfors and Stockholm were cancelled as a result of the incident. Johan Aittamaa from the Swedish police north region told Swedish newspaper Aftonbladet officers will now be examining CCTV footage and will also use dogs to search for evidence. He added: ‘The person gained access to the airport area and sabotaged the aircraft, which has been taken out of service. I don’t know exactly what was done to the plane.’ ‘Technicians will go to the airport. We have initiated a preliminary investigation.’ Gällivare airport's head of security Kaisa Pääkkölä said only one plane was tampered with and the airport would remain closed while police carried out their investigation. ‘We've closed the airspace for traffic until we have more information about what happened,’ said the security chief. So far there have been no arrests made in connection with the incident Source
Email Post