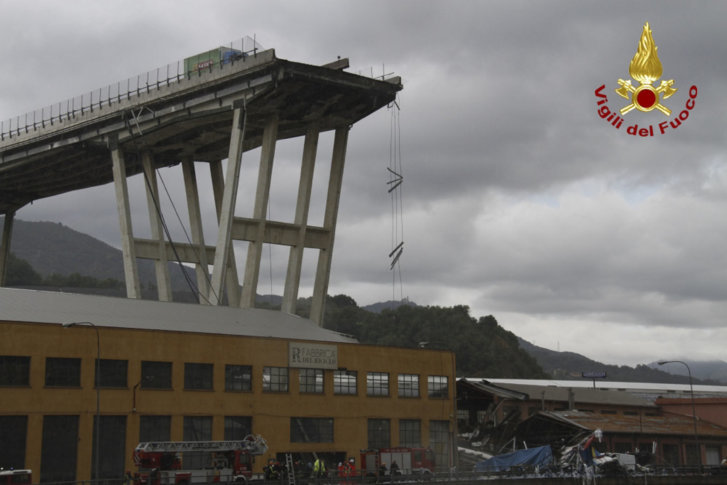 MILAN (AP) — A bridge on a main highway linking Italy with France collapsed Tuesday in the Italian port city of Genoa during a sudden, violent storm, sending vehicles plunging 45 meters (nearly 150 feet) into a heap of rubble below. A transport official said at least 22 people were killed and eight injured in the tragedy. A huge section of the Morandi Bridge collapsed over an industrial zone, sending tons of twisted steel and concrete debris onto warehouses below. Photos published by the Italian news agency ANSA showed a massive, empty gulf between two sections of the bridge.Amalia Tedeschi, a firefighter, told RAI state TV that some 20 vehicles, including cars and trucks, were caught up as an 80-meter (260-foot) stretch of the bridge collapsed. She said two people had been pulled alive from vehicles in the rubble. Officials said they were transported by helicopter to a hospital. Edoardo Rixi, a transport official, told Sky TV that 22 were dead and 8 were injured in the collapse. Video captured the sound of a man screaming: “Oh God! Oh, God!” Other images showed a green truck that had stopped just short of the gaping hole in the bridge and the tires of a tractor trailer in the rubble. Firefighters told The Associated Press they were worried about gas lines exploding in the area from the collapse. Source