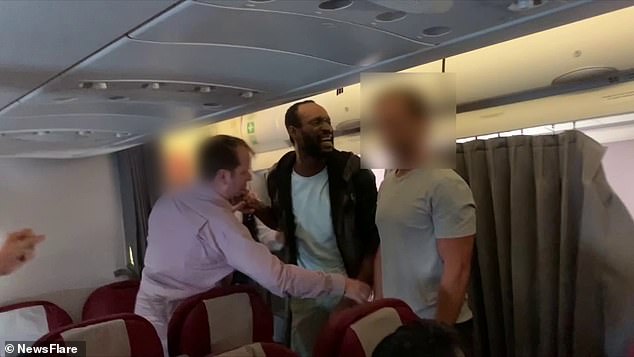 ‘People like you are paedophiles’: Passenger on a Qantas flight to Singapore lashes out at crew mid-air ‘after drinking a bottle of vodka in the bathroom’

A man had to be restrained by crew members after allegedly downing a bottle of vodka in the toilet on an international flight. The man, who was named only as 'Henry', was on Qantas Flight 37 from Melbourne to Singapore on February 28 when the incident occurred. Footage of the altercation, shared to Newsflare, shows the moment the man is cornered as he abuses a Qantas crew member. Henry is then retrained in a seat while he continues to verbally abuse staff. A witness posted a breakdown of the dramatic incident and said they believed the man to be a school teacher from Melbourne. 'This incident happened mid-flight - I was shocked to hear shouting and abusive language behind me,' the witness said. 'The crew members attempted to subdue him however, he was very drunk and apparently he had brought on a bottle of vodka onto the flight from duty free and had consumed it in the bathroom without anyone else's knowledge.' When the video begins the man is filmed saying one of the crew members had been 'an asshole all his life'.   The witness says the man allegedly punched a male crew member in the back before passengers rushed in to help.    Two male passengers are seen coming to the aid of crew as they try to calm the man and stop people filming.     Once the unruly passenger is restrained and seated one of the pilot's attempted to calm him down.  But the man continued to rant at crew members, even falsely calling them 'paedophiles'.  'Paedophiles like George Bell, people like you look like George Bell alright yeah yeah people like you are paedophiles so you cannot tell me how to behave,' he says to one crew member.   The Qantas pilots made the decision not to divert the aircraft as the closest airport was Singapore, which was their destination.   After the aircraft landed, the man was arrested by Singaporean police officers.    'All passengers including myself were quite shocked that this happened but thoroughly impressed with how the Qantas Staff managed to control the man without any further incident despite his obvious abusive towards the staff,' the witness continued.   'His remarks to the male crew members likening them to George Pell and calling them paedophiles was very distressing and upsetting.' Source