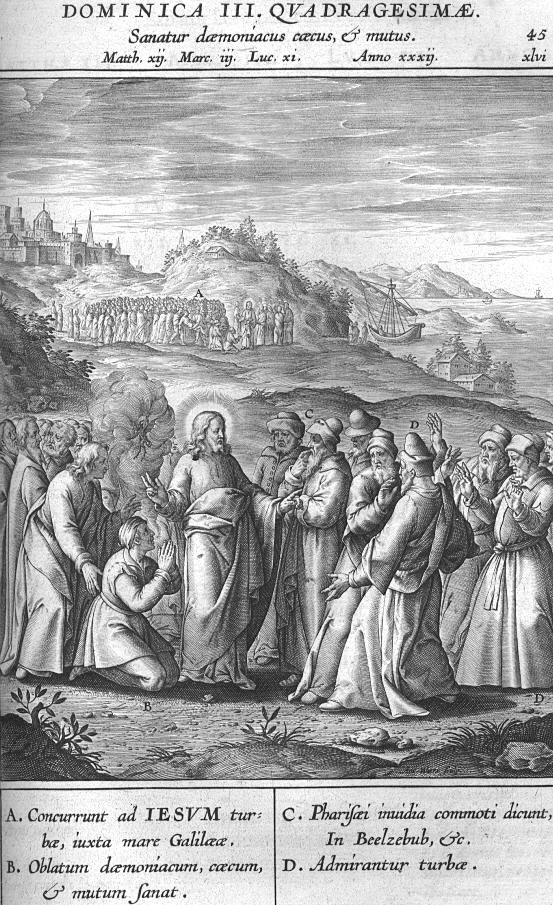 Luke 11. 14-28 GOSPEL
At that time Jesus was casting out a devil, and the same was dumb. And when He had cast out the devil, the dumb spoke, and the multitudes were in admiration at it. But some of them said: He casteth out devils by Beelzebub, the prince of devils. And others, tempting, asked of Him a sign from heaven. But He, seeing their thoughts, said to them: Every kingdom divided against itself shall be brought to desolation, and house upon house shall fall. And if Satan also be divided against himself, how shall his kingdom stand? because you say that through Beelzebub I cast out devils. Now if I cast out devils by Beelzebub, by whom do your children cast them out? Therefore, they shall be your judges. But if I by the finger of God cast out devils: doubtless the kingdom of God is come upon you. When a strong man armed keepeth his court, those things are in peace which he possesseth. But if a stronger than he come upon him and overcome him, he will take away all his armour wherein he trusted, and will distribute his spoils. He that is not with Me is against Me: and he that gathereth not with Me scattereth. When the unclean spirit is gone out of a man, he walketh through places without water, seeking rest: and not finding, he saith: I will return into my house whence I came out. And when he is come, he findeth it swept and garnished. Then he goeth and taketh with him seven other spirits more wicked than himself, and entering in they dwell there. And the last state of that man becomes worse than the first. And it came to pass, as He spoke these things, a certain woman from the crowd, lifting up her voice, said to Him: Blessed is the womb that bore Thee, and the paps that gave Thee suck. But He said: Yea, rather, blessed are they who hear the word of God, and keep it.


That this miserable man was not only dumb but deaf through St. Luke saith no more here, but that he was dumb, St. Mark sayth he was also deaf, and in deed had not St. Mark said so yet it had been very probable of itself, that the devil would make him deaf also because he should not hear the word of God, to get out of his power.

This miserable man, was a figure of much more miserable men to wit men much possessed with some, for those are both deaf, and dumb, yea and blind to, as peradventure this dumb man was.

And first concerning blindness: Are not they blind,that will change such precious things, as is the kingdom of heaven, and the everlasting delights thereof, (which are so great by the testimony of the holy Scripture, as no eye hath seen or heart can imagine the like?) for every little transitory pleasure of this life, to change our celestial inheritance for a mess of porridge,as Esau did?

Can any man be more blind then, Balaam that saw not, nor perceived so much as his Ass did? for his Ass saw an Angel in the way and would not go forward, but he saw him not, and therefore beat him and forced him so cruelly, that God out of his providence, made the Ass to speak, and to expostulate te matter with him, and tell him the cause.

Such is the blindness of many sinners, that were it not that their Asses, that is to say, their bodies , or purses are able to carry them no further in the way of wickedness and sin, but must give them over for want of ability and strength: they would ride headlong to hell,as if they were stark blind,and saw not whither they were going.

Nye peradventure, if their bodies and purses would serve them to sin any longer, though an Angel stood in their way to stop them, they would ride over him, rather then stay.Is not this apparent,when we see daily, holy Angels of God, that is to say, his priests and preachers stand in our way, and cry out unto us: Oh commit no this or that sin or if you have committed it do so no more: but do penance for it,otherwise you ride as fast as a man rides in a race,head long to hell, and how few there be that follow their advise.