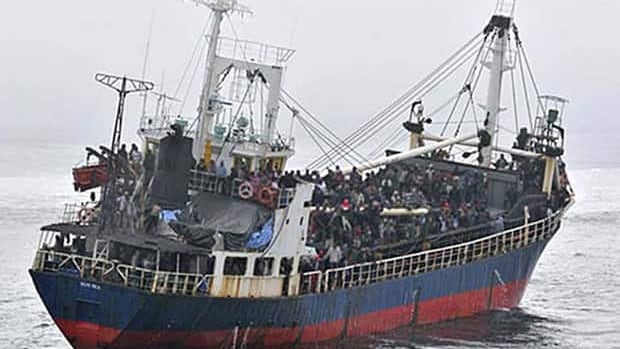 The India Star, moored at her berth for over a year, was a sixty-year- old steamer, veteran of the India mail run back under the British. Old as she was, she had stood up fairly well to the early rigors of independence. But all too soon she had found herself consigned to hauling human wrecks displaced by the partition; and later, worst of all, wretched pilgrims on their way to Mecca. Of her five stacks, straight up, like pipes, four were lopped off at different levels, by time, by rust, by lack of care, by chance. … In such a state she hardly seemed fit for anything but one final act of heroic desperation. Perhaps that was what the captain had in mind when he ordered his tattered crew to put the rotting gangplanks down again, the same ones he had had them pull in just three days before, when the crowd seemed about to swell to precarious size.

Actually, the captain’s action would be quite hard to fathom, were it not for the strong likelihood that someone had put the idea in his head. As a matter of fact, Ballan had managed to steal on board the night before, with no particular end in mind, but just for a firsthand look at the strangely fortuitous conditions and the chain of inexorable events that seemed to be forming. And he wasn’t alone. Several others had had the same idea: to wit, a group of nameless Indians, whites, and a Chinaman, experts one and all in mob psychology. They were the movers, the undercover force. Acting on pure intuition, they knew precisely what to do. One of them stationed himself on the bridge, persuasive grenade in hand, while the others proceeded to question the captain. Just how much would it take—coal, water, supplies, the barest essentials—to make the trip to Europe?

“We won’t be coming back,” the one with the grenade had replied. It was then that Ballan had arrived on the scene. And although he was a stranger to their persons and their plans, they all understood one another at once, like a chosen few admitted to the mysteries.

what mysteries were they, and how had they been chosen? …

Spontaneous though they may seem, mass movements seldom occur without a certain degree of manipulation. That being the case, one is quick to picture a kind of almighty conductor, a great manipulator in chief, pulling thousands of strings the world over, and aided here and there by gifted soloists. Nothing could be further from the truth. What happens is that, in this world of warped senses, certain creatures of outstanding mind—for good or ill—begin to stir, to look for a way to fight off uncertainty, a way to escape from a human condition whose age-old persistence they refuse to accept. Unsure of what lies beyond, they plunge headlong all the same, in a wild flight into the future, burning their bridges of sober reflection behind them. Each one pulls the strings to the lobes of his brain. But here, precisely, is today’s great mystery: all of those strings, independent of each other, are nonetheless bound up together, and stem from one selfsame current of thought. The world is controlled, so it seems, not by a single specific conductor, but by a new apocalyptic beast, a kind of anonymous, omnipresent monster, and one that, in some primordial time, must have vowed to destroy the Western World. The beast has no set plan. It seizes whatever occasions arise. The crowd massed along the Ganges was merely the latest, and doubtless the one with the richest potential. Divine in origin, this beast? Or infernal, more likely? Be that as it may, the phenomenon, hard to believe, is a good two centuries old. Dostoevski analyzed it once upon a time. And Péguy too, though in different form, when he railed against the “intellectual clique.” And even one of our former popes, Paul VI, toward the end of his reign, as he opened his eyes and discerned, at long last, the work of the Devil … Nothing can stop the beast. That much we all know. Which is probably why the chosen few have such faith that their ideas will triumph, and why the ones who persist in the struggle know only too well how futile it is …”

Fallen archangel that he was, Ballan knew the lackeys of the beast on sight, and put himself at their disposal. That too is an explanation. And he offered the dung man and his hideous son to their cause. In three days their power over the hordes had reached such heights that the vertical pair, together, had become the crusade’s unchallenged leader. Ballan was quite content just to follow along and listen, whispering a practical thought in the turd eater’s ear from time to time, between two volleys, and hearing him work them into the epic account with incredible speed and skill . “They’ll take over the India Star first thing tomorrow,” the China- man had said. “They’re ready, but they don’t see it yet. All we need is to find the right idea to open their eyes …”

“We’ll have to pay for the coal and provisions,” the Indians had added. “But our women still have a few jewels, even the poorest. And even our lowliest brothers have a rupee or two put aside for the gods.

Camp of the Saints 14 A pittance, to be sure. But multiply a pittance by a thousand times a thousand, and you have enough coal, and rice, and water to take you to Europe. They’re ready, but we have to find the right idea …”

“Leave the idea to me,” Ballan had answered.

Later, he couldn’t remember if he really had put the idea in his head, or if the turd eater had read his mind. An illiterate Hindu pariah who can quote from Apocalypse, transform the Gospels, fabricate legend to inspire an event, could probably read the mind of the likes of Ballan too. … He had said: “… then they gathered together their necklaces and diadems, their bracelets and rings, and they said to the captain, ‘It’s only right that we should pay you. Here, take all this. You’ve traveled the world up and down. Come, show us the way to paradise …’” And the first collection had begun even before his tale was over. Gourd bowls in hand, the totem’s monster minions wormed their way through the crowd. These wretches, more used to taunts and blows than to alms and compassion, these beggars with their ever-empty bowls, hands open onto the void, now found themselves pouring out piles of treasure at the prophet’s feet, then trotting back on their twisted legs for more, as the crowd kept calling, “Over here! Over here!” In no time, once it was started, the money changers had the affair in hand. They set up impromptu networks, organized an army of collectors. Most incredible of all, the crowd didn’t even distrust them! At the sight of the gold and rupees heaped up like the sand in a giant hourglass, everyone saw himself playing a part in the legend. And when the turd eater pictured the fleet of the gods at the gates of the West, and described the people singing on the deck of the India Star, they all turned and looked at the India Star, and reached out their arms to paradise.