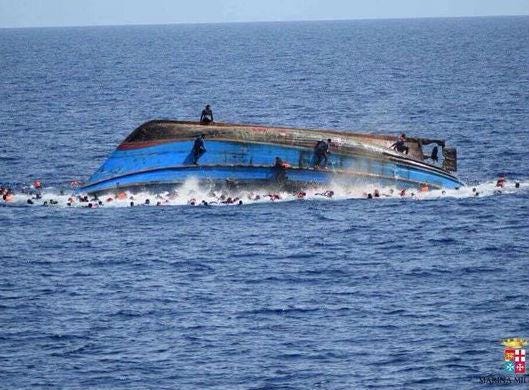 At the mouth of the Ganges, the delta’s reddened waters paled abruptly as they emptied into the vast Gulf of Bengal, and the hundred ships of the refugee fleet steered a sluggish southwesterly course toward the Straits of Ceylon. The captains had agreed to limp feebly along for the sake of one moribund vessel, the shoddiest of the lot, a big river tugboat used to far calmer waters, the most pitiful cripple in this whole floating slum. Like the rest of her flat deck, her low-slung bow was piled white with pilgrims. With every wave it plunged into the water, paying the sea a ransom of surplus souls, carried off in the mists. A kind of pathetic Hop-o’-my-thumb, Camp of the Saints 18 struggling to keep pace, and strewing a store of human pebbles over a path of no return. On the lead ship, the India Star, the captain’s fancy cap had changed heads, and sat perched now on a bald, shapeless stump. Gold braid wreathed the monster’s brow; the polished visor shaded his frozen gaze from the ocean sun, as he stood on board commanding the ship and, indeed, the whole fleet. He was like some oracle, consulted before any weighty decision, dispensing his orders. So long as someone could read the flash and flicker of his lidless eyes. In time it became quite clear that, more than once, the fleet owed much to those silent commands …

Some of the actors in the drama were soon to learn how superfluous they were. From the moment the India Star blew her very first blast, in fact. And it came as something of a shock. Ostracized, victims of racial hate or simple indifference—especially indifference— they found themselves prisoners unpenned, yet hemmed in by walls of human flesh deep in the mazes belowdecks, or stuck in some dark, stifling, cubby hole next to the engines. Forgotten outsiders, like captives won in battle, destined now only for the last triumphal march. A few helpless Chinese, and even some whites, squatting on their haunches, huddling together like primitive tribes, alone and hungry. Talking and talking, for a week on end … The event they had shared in, the event they were forced to sit idly by and watch, plunged them deep into raptures of reasoned delight, heightened no doubt by fatigue, and filled with each one’s concept of a bright new world, like something from the glossy pages of any leftist weekly in the West. Experts one and all among themselves, always on the verge, despite their woeful state, of taking self-indulgent credit for their harangues, like satisfied signers of innocuous petitions, ready to bandy back and forth their names, their ideals, their principles—things that mean terribly little, really, when someone is wallowing down in a ship’s dark hold. With no food to sink their teeth into, they chewed the West to shreds with words. Hunger was turning them mean. Already they saw it their mission to guide the flock’s first steps on Western soil. One would empty out all our hospital beds so that cholera-ridden and leprous wretches could sprawl between their clean white sheets. Another would cram our brightest, cheeriest nurseries full of monster children. Another would preach unlimited sex, in the name of the one, single race of the future—“a simple matter,” he added, “since unlike skins attract,” which was something he claimed to know all about. Still another would turn our supermarkets over to the barefoot, swarthy horde: “Can’t you see it now! Hundreds of thousands of women and children, smashing their way through those gigantic stores, stuffing their mouths with food, beside themselves with pleasure …”

Now and then one of those viperous tongues stopped wagging long enough to lick a few droplets of moisture condensed on the sheet-iron wall. “Nothing to drink, poor devils!” cried the renegade writer. “Well, decadent world, get ready to share your treasure! Your tubs will be filled to the brim, and the water boy, poor crook-necked bugger, will splash around to his heart’s content, and maybe he’ll even go out of his mind just thinking how heavy it all would be, hanging in buckets from a stick across his shoulders. And you know what? You’ll have to knock at your door, your very own door, to beg for a glass of water!” So saying, he collapsed, not to be heard from again. By the ninth day they had all stopped talking, one by one: militants with a cause, lay missionaries, apostate priests, idealist quacks, activist thinkers, the whole brigade of antiworld thugs that had set sail with the fleet. Somehow they managed to keep alive. From time to time a child brought them rice, prompted, more than likely, by the memory of Ballan and his pocketful of sticky sweets… It was only when the fleet sailed into the Straits of Ceylon, around the tip of India and then northwest toward the Red Sea and Suez, that the whole world sat up all at once and began to take notice. From that point on, words flowed and flowed from every thoughtful mouth—streaming over radio, coursing over television, and flooding in a swelling tide of print.