Cry, Havoc! And Let Slip The DOGS OF WAR.......TRUMP: Chinese Government Is Moving Troops To The Border With Hong Kong

US intelligence has confirmed that China is moving troops to the border with Hong Kong, US President Donald Trump said Tuesday, appealing for calm amid intensifying pro-democracy protests in the semi-autonomous financial hub. Trump relayed the intelligence report in a tweet as protesters paralyzed Hong Kong airport for a second day in defiance of the city’s leaders.“Our Intelligence has informed us that the Chinese Government is moving troops to the Border with Hong Kong. Everyone should ‘be calm and safe!” Trump said in a tweet. Chinese state and social media had earlier aired video of security forces gathering across the border from the enclave, which has been rocked by unrest for ten weeks. Source 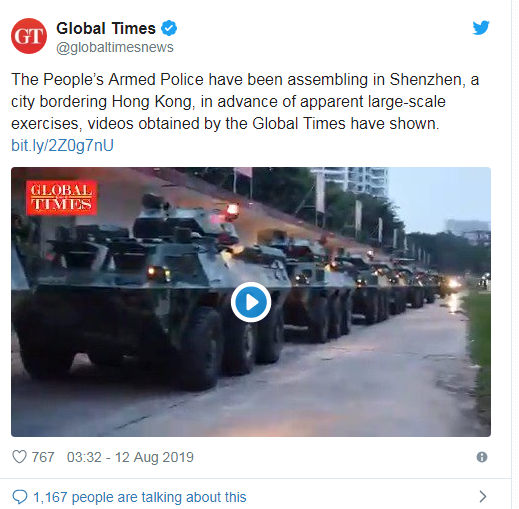