Fury at power cut that brought Britain to its knees: Government launches probe into mystery simultaneous failure of wind farm and gas-fired power station as officials insist there is 'no evidence' of a cyber attack

Energy watchdog Ofgem has demanded an urgent report from National Grid after a major power cut yesterday caused travel chaos and cut electricity for almost one million people in England and Wales.  Huge swathes of the country were left without power after two major generators failed yesterday afternoon within minutes of each other.   The crisis began when a gas fired power station at Little Barford, Bedfordshire failed at 4.58pm, followed two minutes later by the Hornsea Offshore wind farm in the North Sea.   A major review has been launched into the blackout but the National Grid is 'confident' that there was no 'cyber attack' on the system.  Source 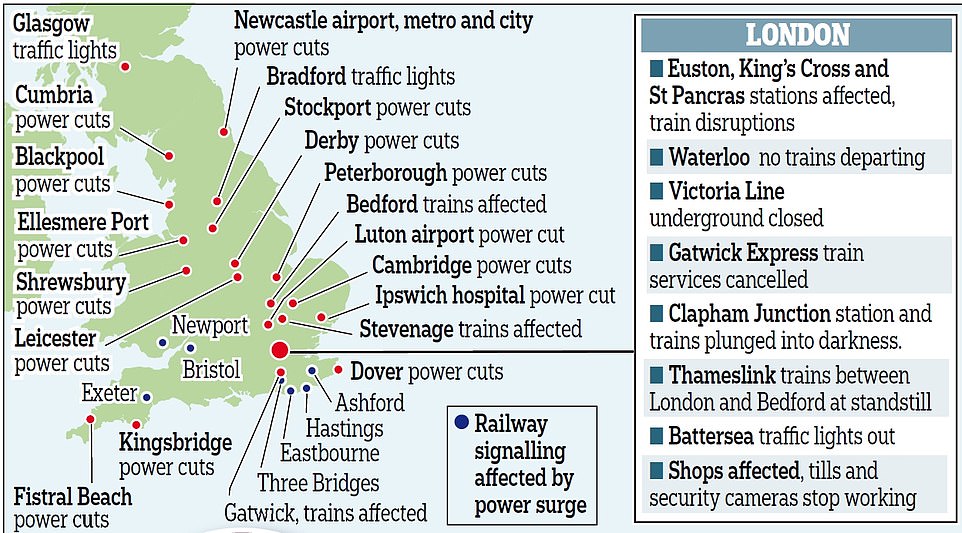 Nearly a million people have been affected by a major power cut across large areas of England and Wales, affecting homes and transport networks.  National Grid said it was caused by issues with two power generators but the problem was now resolved.  Blackouts were reported across the Midlands, the South East, South West and North East of England, and Wales.  Hundreds of people were stranded at King's Cross station as trains were delayed and cancelled.  Traffic lights in some areas also stopped working. The Department for Transport, said: "Today's power outage has had knock on impacts on travel.  "We're working hard with Network Rail and others to ensure systems are up and running as quickly as possible, so that everyone can complete their journeys safely."  Source