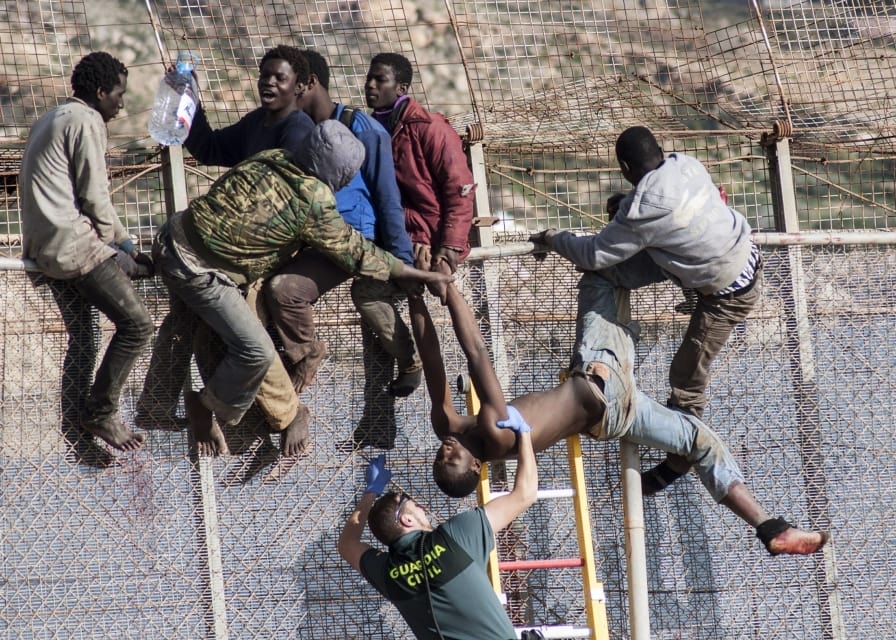 The stars had dimmed. The moon had set. At the foot of a tall pine sat Colonel Dragasès, warming his hands around a mug of steaming coffee. The searchlight on the roof of the villa was cutting its swath less sharply through the night. Not that the darkness had thickened around it, but rather because, as the outlines paled, they began to blend in with the moving white beam, pacing the beach like a sentry, glimpsed through the haze of the early-morning mists. Five o’clock. Everything was quiet on board the ships of the refugee fleet. Nothing was stirring. Only an occasional, barely noticeable tremor, rippling the surface of the bodies that lined the decks. Heads, most likely, rearing ever so slightly, as daybreak neared, to gaze toward shore for an inkling of impending destiny.

In Panama Ranger’s camp, the noise had died down. Or, rather, it had changed, gaining in refinement what it gave up in volume. No sounds but guitars now, strumming to the dismal wail of those soulful ballads so very much in vogue. It was a time, indeed, when the popular song wallowed in melancholy, with its four-note laments intoned for oneself, one’s fellows, all of mankind, and the rest. Whenever the pop tunes would lose their blaring charm, there was nothing left but to let oneself drown in the sticky-sweet syrup of human misery and despair, set to music of sorts, that one refuge of yearning and unfulfilled souls that had learned nothing else. It never occurred to any of them to measure that notion of misery against the past, or against their own well-being. For them it was a drug, and they needed to shoot up a good strong dose to keep themselves going, like addicts and their heroin. The fact that it was often hard to come by close to home made very little difference. Nothing stops an addict when he has to have his fix, and poisons like that are easy to import. There’s never a lack of pushers. Besides, modern man has always had, tucked away in the back of his mind, that singular longing for total destruction, sole cure for the boredom and anguish that consume him. It’s that hope that the beast had unleashed, exalting it in song…. At that moment, in fact, a voice rose up over the rest. A young man’s voice, pure and strong. And the others stopped to listen, then took up again in a chorus of responses, as they might have done at vespers or the like, back in the days when such things were still sung. (We should mention, in passing, that the slaughter of the ancient liturgy, like the murder of everything else that was Sacred, was no random operation. The reader shouldn’t think for one moment that, when they choked it all dead with their own two hands, the priests didn’t know it would spring up again, in some other guise. They knew perfectly well, and lots of them had reveled in giving the enemy the best of their weapons. The sacred had no more need now for God. The liturgy glorified mankind on earth. And the priests themselves, freed of the burden of divinity at last, could be like all the rest, and resume their status as everyday men…) What the voice was singing was plainly obscene. But only the lyrics; and the young man’s inspired tone made up for them nicely, as he improvised his chant:

“For the Arab kicked in the balls, lying bleeding on the sidewalk, we’ll tear this sick world down …”

“We’ll tear this sick world down,” the chorus echoed …”

“For the working girl knocked up some Saturday night, with a stupid damn baby in her belly, we’ll tear this sick world down

“We’ll tear this sick world down …”

“For the kid bawling his head off, who gets slugged by his old man, dead tired from his noisy machines, we’ll tear this sick world down …”

“For the poor, starving black who sweeps up the crap of the rich people’s dogs, we’ll tear this sick world down …” “We’ll tear this sick world down,” the chorus repeated. But as things began to grow more tense, some made a few select additions: “… this goddamn, stinking, fucked-up world …” And over the twang of strumming guitars, each voice drew out the refrain with its own words of hate. (Someone, at a loss for adjectives, probably, even tossed the phrase “human world” into the chorus, and never knew how hard God tried to forgive him …)

“For the little old guy burping his gulp of wine at the charity Christmas party, we’ll tear this sick world down …

“For the check the big-hearted boss sends the priest at the charity Christmas party, we’ll tear this sick world down …

“For the black girl’s naked flesh sold on millionaires’ safaris …

“For the twenty-five wild boars the President bagged himself …

“For the caviar wolfed down in India, one night, when everyone else was starving …

“For the Western murderers and the throats they slit, when people wouldn’t bow down and believe their shit …”

The colonel finished his coffee, and observed, as he lit a cigarette:

“Now that one’s more like it. Much more poetic. Even starting to rhyme. And that ‘Western murderers’ bit isn’t far from the truth, by God! So sure of itself, that fine West of ours. So sure it could slap its blind culture on the world. So sure of the law that might makes right! Ah, the great things we did in the name of that law! And how nice it felt, for all those years, making everyone accept it!”

He turned to the officer and asked:

“Captain! How many murderers by last count, please?”

“As of five-fifteen, colonel, we had two hundred twenty. Officers, noncoms, and enlisted men. Not counting Monsieur Perret and his chauffeur … Wait, I take that back …” (He looked over and saw a figure fleeing through the darkness.) “Scratch the chauffeur. He just took off. That means two hundred twenty-one in all. Grand total. Which is two hundred down from ten minutes ago, by the way. With cards like that, we’ll be out of the game in no time.” (So saying, he stuck out his chin, froze his face in a rule-book stare, clicked his heels, and saluted.)

“What’s with you?” asked the colonel.

Then he started rattling off, all in a single breath, in his most ceremonial of tones:

“French officer extraordinaire! With incredible vigor and no thought for his safety, led his men past all known bounds of courage, and effected a first-rate retreat to the shores of the Mediterranean, submachine gun in hand! Decorated for services above and beyond the call of duty …”

“You wouldn’t be pulling my leg, would you, Captain?”

“You guessed it, Colonel.”

And they both burst out laughing. Then the captain went on:

“Frankly, I’ve never had so much fun. The ones who deserted had no sense of humor. That’s their trouble. Like lots of people nowadays. A good sense of humor is pretty hard to find. So you’re left with the cream, Colonel. The ones who think everything’s a big goddamn joke, and especially all this bleeding-heart business.”

“I’m afraid we’re a little old-fashioned,” Jean Perret broke in. “Humor is out of style. Happiness is a crime. And ambition is just a dirty word. Everything that used to make life worth living, once upon a time. Why, when I was their age …”

“No comparisons, monsieur!” the colonel interrupted. “That’s out too. Besides, what’s the use? … Listen to those kids and their damnable prayers. Why, they’re already old men and women at twenty. What kind of an inspiration is that for today’s young people? All taking their cue from the poorest, filthiest, stupidest, laziest, scruffiest scum of the lot! And whatever you do, don’t ever look up, or have any ideals. Never think for yourself. It’s so much less sweat! Well, that’s a hell of a way to try to build a world. Even one like theirs! Never let yourself climb up on anyone’s shoulders and try to rise above the crowd. Just follow along in the gutter, down with everyone else …”

Night was beginning to fade, and with it the sounds and voices so clear in the darkness. As Panama Ranger’s litany grew dimmer, Colonel Dragases took a megaphone and put it to his lips. And he stood there, feet spread, huge colossus of a man fairly bursting with health, facing north toward his attackers, and shouting:

“Screw you all, goddammit!” Then he turned toward those around him, and added:

“Not very clever or original, but that’s just the way I feel. Besides, they’re not really the ones it’s meant for, I don’t suppose.”

“Who then?” asked Jean Perret.

From the occupied houses on all sides the answer was quick in coming:

“See?” said the colonel. “They can’t even say ‘shit’ with style anymore!”

“Fascist,” he echoed. “And imperialist. Capitalist. Racist. Militarist …When it comes to ‘ists’ I’ll even insult myself… Hey, you guys on the roof! Thank those kids over there for me, will you?”

The machine gun on top of the villa spat out a few rounds. Day had begun to break, and the men could see what they were shooting at now. Then a volley of angry shouts, and the moans and groans of the wounded. Suddenly the squad leader threw down his binoculars: “Good God, men, hold your fire!” he commanded. “What’s the matter?” the colonel snapped. “Don’t tell me you’re losing your sense of humor too!”

“No, Colonel. It’s just that we damn near shot down a pack of padres!”

“So? Why should that bother you And anyway, how can you tell?”

“That’s just it, Colonel. These are even dressed like padres. Like the kind I haven’t seen in years and years! … They’re coming down the path, thirty-two degrees east, at eight hundred meters… And they’re singing! … The one in front has on a kind of pointy white hat, and he’s walking under a parasol, or something, with this funny-looking gold thing in his hands …”

“No, no, no! That’s a miter. And a canopy. And the monstrance for the Blessed Sacrament, you dummy!”