I Pray For The Destruction Of The Airline Industry During Sunday Mass: TRUMP TWEETS Picture Of A Lightning Strike Behind Air Force One...... 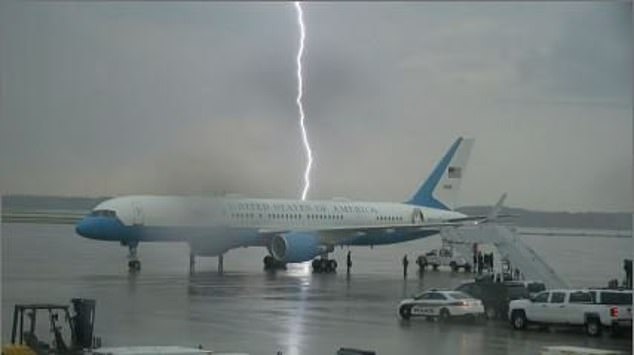 'This is amazing!' Donald Trump shares dramatic photo of a lightning bolt behind Air Force One as weather forces him to cancel tour of Hurricane Dorian damage

Donald Trump shared a dramatic picture of a lightning strike behind Air Force One as the weather forced him to abandon a tour of Hurricane Dorian damage.  The President tweeted the picture last night of a vertical lightning bolt flashing in the gloomy skies at a Marine Corps air station in North Carolina.   'Departing MCAS Cherry Point in North Carolina for Fayetteville, North Carolina. This is amazing!,' he wrote.   Trump had planned a helicopter tour with Gov. Roy Cooper to view the damage but was briefed on the presidential plane instead.  Source