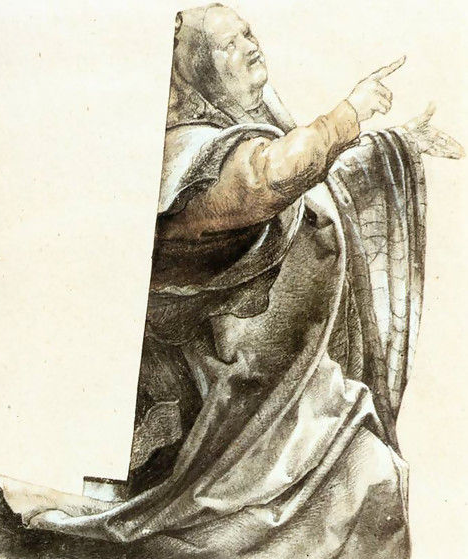 This Pharisee invited Christ to a Feast, but is here called to eat bread, to signify the frugality, and temperance we should use even in our feasts, and to control the excess and sumptuousness of these days, therein they seem rather to sacrifice unto the Gods of the Pagans, Ceres and Bacchus, then to make sober Christian feasts.

This Pharisee, I say, invited Christ to a Feast, no doubt with many fair and smooth words, but with an intention to entrap him being like Sampson's dead lion that had honeycombs in his mouth, and all his body putrefy and corrupted within.

He likewise thought peradventure, that in a Feast having well eaten and drunk,Christ might easily fall into some oversight in word or deed, as it commonly happeneth to men that are not vigilant over themselves.

All these things, Christ as he was God foreknew, as appeareth by his question unto them, asking at the very first, before any thing was said or done, whether it were lawful to cure upon the Sabbath day? pointing thereby at their thoughts and intentions, which he knew were to entrap him, and therefore they held their peace suspecting he knew them well enough.

All this, I say, Christ foreknew, as he was God, and yet he would go to the Feast, not for love of the Feast, nor so much for the corporal cure of the dropsy man, but for the love of their souls which was a better Feast to him, to instruct & teach them as he did,no doubt,partly by his sober and modest behaviour at the table,but chiefly by his doctrine and speeches, reprehending by an elegant parable their ambition and affectation of the highest place at the table,and convincing their ignorance of deeming it more unlawful to cure a man upon the Sabbath, then to draw a beast out of a ditch, wherein Christ did as a man would do in this example following.

If a cross or Crucifix with the image of Christ upon it,should be set up in the street,against a Church wall, or some other place,as oftentimes it is in Catholic Cities and towns,and should chance to fall down into the dirt as he passeth by, and in falling should break his head, or do him some other hurt, I suppose this man would not go away for anger & leave the Crucifix in the dirt, and much less trample upon it and break it in pieces, but reverently take it, and set it up again: Even so Christ finding this Pharisee and his fellows, being the images of God, curiously made by the hands of God himself to his own similitude, fallen into the dirt of malice and sin, and in falling intending to entrap & hurt him, and so deeply, as to make him a teacher against the observation if the Sabbath which was a heinous offence with them.

He would not for anger and indignation against them, let them lie in the dirt of their sin, but with love and piety taught them how to come out of it again, if they would themselves, not by angry words, and sharp reprehension, which often time do much more harm then good but pointing at their pride and ambition by an elegant example of affecting the highest place at the table in feasts,and public meetings, meaning greater matters; and convincing them of their false & superstitious opinion of keeping the Sabbath day,