The False Peace Pope Francis Scowls At The Angel Of Peace St. Michael The Archangel 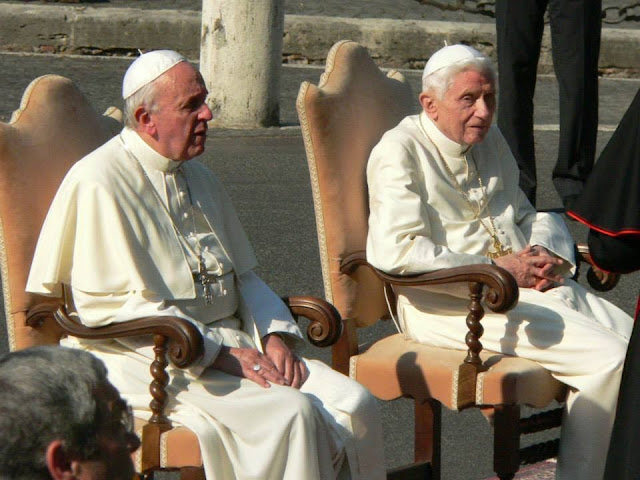 The following was published 14 SEPTEMBER 2013:

Pope Of False Peace Francis Scowls At The Angel Of Peace St. Michael The Archangel

What is Pope Francis scowling at?

VATICAN CITY — With retired Pope Benedict XVI sitting next to him, Pope Francis formally recited separate prayers to consecrate Vatican City to St. Joseph and to St. Michael the Archangel.  The early morning ceremony Friday in the Vatican Gardens featured the unveiling of a new statue of St. Michael, sculpted by Giuseppe Antonio Lomuscio. The project, along with a fountain by Franco Murer dedicated to St. Joseph, was initiated under Pope Benedict.  Pope Francis said the statue of St. Michael with his sword piercing the devil is "an invitation to reflection and prayer."  "Michael fights to re-establish divine justice," he said. "He defends the people of God from their enemies, especially the enemy par excellence, the devil."  The statue is a reminder that evil never wins, the pope said. The devil's head is "crushed, because salvation was accomplished once for all with the blood of Christ." Source 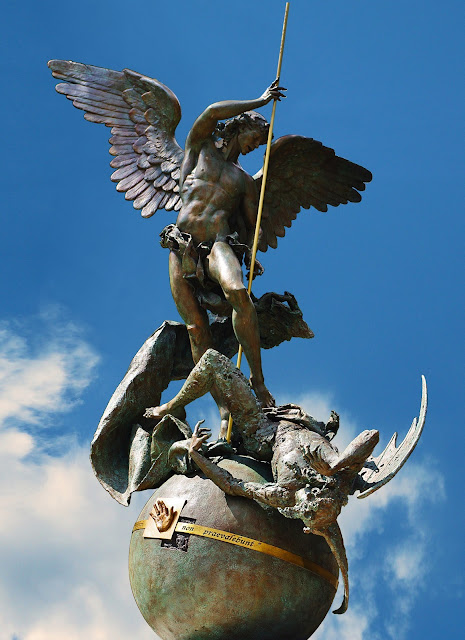 "In the Vatican Gardens there are several works of art. But this, which has now been added, takes on particular importance, in its location as well as the meaning it expresses. In fact it is not just celebratory work but an invitation to reflection and prayer, that fits well into the Year of Faith. Michael - which means "Who is like God" - is the champion of the primacy of God, of His transcendence and power. Michael struggles to restore divine justice and defends the People of God from his enemies, above all by the enemy par excellence, the devil. And St. Michael wins because in him, there is He God who acts. This sculpture reminds us then that evil is overcome, the accuser is unmasked, his head crushed, because salvation was accomplished once and for all in the blood of Christ. Though the devil always tries to disfigure the face of the Archangel and that of humanity, God is stronger, it is His victory and His salvation that is offered to all men. We are not alone on the journey or in the trials of life, we are accompanied and supported by the Angels of God, who offer, so to speak, their wings to help us overcome so many dangers, in order to fly high compared to those realities that can weigh down our lives or drag us down. In consecrating Vatican City State to St. Michael the Archangel, I ask him to defend us from the evil one and banish him. " Pope Francis

Who is Pope Francis scowling at?

And what is running through Pope Francis's mind?

1. Underfoot? My familiar is not in a very good place.
2. I don't like the work. It is too triumphalistic!

It's said a picture is worth a thousand words - I just have a few.

Pope Francis claims to be a pope of peace - his goal? Nobel Peace prize.

Any peace brought about by this pope will be a false peace, how do I know this?

Our Lady at La Salette said so:

How do you recognize false peace?

Two points according to Our Lady:

1. People will think of nothing but amusement.
2. The wicked will give themselves over to all kinds of sin.

During a time of false peace - sin continues uninterrupted.

The Pope will not convert anyone to the Catholic Faith and because he will not act like a pope he is called to be - no one will change their sinful ways. Sin will continue under this peace pope.

Pope Francis the false peace pope who is at war with St Michael the Angel of Peace.

St Michael is the Angel of Peace - St Michael said so at Fatima:

In 1916, as if in preparation for the Visits of Our Lady, the three children were graced with three visits by an Angel.

The children were tending their sheep on the east side of the Cabeço, (a small hill about 5 minutes' walk from their village called Aljustrel, which is a hamlet of Fatima), when a strong wind began to shake the trees. A figure appeared above the olive trees and as it came closer Lucy describes:

"It was a young man, about fourteen … whiter than snow, transparent as crystal when the sun shines through it, and of great beauty."

"Do not be afraid! I am the Angel of Peace. Pray with me."

Kneeling on the ground, he bowed down until his forehead reached the ground. The children did the same. Then he led them in this prayer three times:

"My God, I believe, I adore, I hope and I love Thee! I ask pardon of Thee for those who do not believe, do not adore, do not hope and do not love Thee!"

He rose and said:

"Pray thus. The Hearts of Jesus and Mary are attentive to the voice of your supplications." Then he disappeared.

They were so impressed by the Angel's presence and message that they prayed this prayer over and over again all day long, lying prostrate on the ground.

They continued to pray like that for many days but gradually their fervor lessened.

At the height of summer, the Angel appeared a second time as the children, having returned their sheep to their barn during the hot midday sun, were playing near the well. He said to them:

"Make of everything you can a sacrifice and offer it to God as an act of reparation for the sins by which He is offended, and in supplication for the conversion of sinners. You will thus draw down peace upon your country. I am its Angel Guardian, the Angel of Portugal. Above all, accept and bear with submission the suffering which the Lord will send you."

The third and final apparition of the Angel took place in the autumn while the children were tending their flock in the small olive grove. They knelt down with their foreheads touching the ground and were reciting the prayer of the Angel when an extraordinary light shone upon them.

"We beheld the Angel, holding a chalice in his left hand with the Host suspended above it, from which some drops of blood fell into the chalice.

"Leaving the (Host and) chalice suspended in the air, the Angel lay prostrate on the ground beside us and made us repeat three times:

"Most Holy Trinity, Father, Son and Holy Spirit, I offer Thee the most precious Body, Blood, Soul and Divinity of the same Son, Jesus Christ, present in all the tabernacles of the world, in reparation for all the sacrileges, outrages and indifference by which He Himself is offended. And through the infinite merits of His most Sacred Heart, and the Immaculate Heart of Mary, I beg of Thee the conversion of poor sinners."

"Then rising, he took the chalice and the Host in his hands. He gave the Sacred Host to me, and shared the Blood from the Chalice between Jacinta and Francisco, saying as he did so:

"'Take and drink the Body and Blood of Jesus Christ, horribly outraged by ungrateful men! Make reparation for their crimes and console your God.'

"Once again, he prostrated on the ground and repeated with us, three times more, the same prayer and then disappeared."

The brief words of the Angel present as a synthesis the unique message of Fatima which constitutes for our century a glimpse of the Gospel perfectly adapted to our time.

Who is this Angel of Peace that came to Fatima as a precursor of Our Lady? Portuguese historians recognize St. Michael the Archangel as their patron and protector, who had always been venerated as the Guardian Angel of their country.

In addition, in the Roman Breviary as well as in the litanies, the Archangel Michael is also invoked under the titles Author of Peace and Michael, the Angel of Peace. 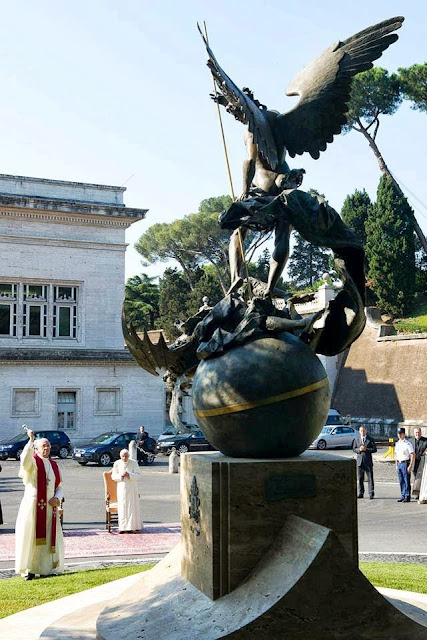