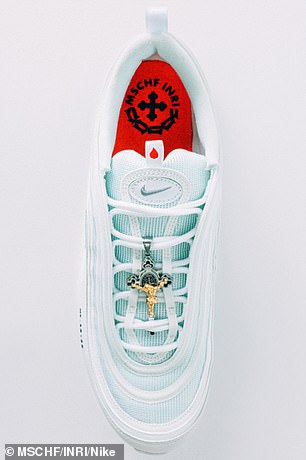 Because everyone wants to walk on water! $3,000 Nike sneakers that are filled with HOLY WATER and blessed by a priest sell out just minutes after the 'Jesus shoes' were released

A creative brand has given a few lucky people the chance to walk on water (literally) while adding some spirituality to their style after releasing limited edition 'Jesus shoes' that are filled with holy water and have been blessed by a priest - and cost a staggering $3,000. However, despite the sky-high price tag, it seems there were plenty of people out there willing to pay big bucks in order to elevate their shoe closet with such a unique - and spiritual - design, because the shoes sold out mere minutes after being launched by Brooklyn-based company MSCHF, according to Fox News. In order to create the aptly-named Jesus Shoes, the company gave a pair of classic Nike Air Max 97s a religious revamp, first filling the sneakers' transparent air-filled sole with holy water that it sourced from the Jordan River and then colored in order to make it more visible inside the shoe. Source
Email Post