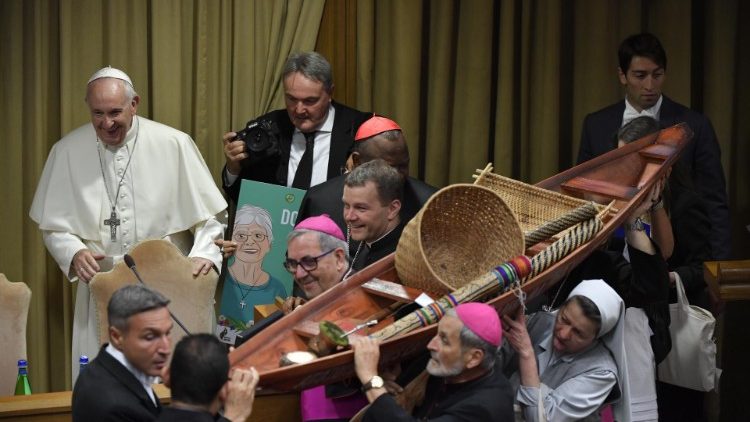 He that diggeth a pit, shall fall into it: and he that setteth a stone for his neighbour, shall stumble upon
it: and he that layeth a snare for another, shall perish in it. Eccl.xxvii.xix.

Student: Although I do not think that the arguments which seem to impugn John XXII are conclusive even though they are difficult to refute - I will think carefully about their refutation - yet there are some others that do seem powerful. So it does indeed seem probable to me that it is not impossible for a pope who enters [office] canonically later to become a heretic. Now because truth that has been criticised shines more brightly in the sight of all, I beg you to try to argue the opposite case.

That a pope can not become a heretic

Master: There are many arguments for the opposite assertion, which, as is said, John XXII and also, it is reported, brother G[erald] maintain. The first is as follows. There can be no sure judgement without vacillation about doubts which arise in that community in which everyone can err about these doubts and their bases. But in the church militant there is sure judgement without vacillation about doubts that arise concerning the faith. For otherwise it would not be necessary to adhere firmly to any determination, definition or declaration of the church militant about matters of faith because whoever can err should not be trusted with undoubted faith. Therefore not everyone in the church militant can err; therefore there is someone in the church militant who can not err; and this is no one but the pope. Therefore a pope can not err about matters of faith.

A third [argument] is as follows. That one whose writings are counted among the canonical writings can not err against faith because whoever can err against faith can be rejected by believers. If an author is rejected, however, his writings are also rejected (Extra, De hereticis, c. Cum Celestinus). Writings that can be rejected, however, should not be numbered among the canonical writings. That one whose writings should be considered canonical, therefore, can not err against faith. The writings and decretals of a pope, however, are counted among the canonical Scriptures, as Augustine attests. In book 2 of his De doctrina christiana, found in dist. 19, c. In canonicis [col.61], he says, "The most expert investigator of the divine Scriptures should follow the authority of the greater number of catholic churches on the question of canonical writings. Among these are those [which] have deserved to have apostolic seats and others which have deserved to receive letters from them." Pope Agatho agrees with this too. As we find in the same dist. c. Sic omnes [col.60], he says, "In the same way all the decrees of the apostolic see should be accepted as supported by the divine voice of Peter himself." Therefore a pope whose writings are [taken] as authentic can not err against faith.

A fourth [argument is] as follows. The highest pontiff under the new law should not be thought of as of less authority, dignity, sanctity or strength of faith than was the highest priest or judge under the old law; but the highest priest or judge under the old law was to be considered of such strength and authority that on any difficult question no one was permitted to doubt his definition or judgement or to oppose it in any way. God himself testified to this, as we find in Deuteronomy 17 [:8-13], when he said to all the people, "If thou perceive that there be among you a hard and doubtful matter in judgement ... and thou see that the words of the judges within thy gates do vary, arise and go up to the place which the Lord thy God shall choose,. And thou shalt come to the priests of the Levitical race and to the judge that shall be at that time, and thou shalt ask of them, and they shall show thee the truth of the judgement. And thou shalt do whatsoever they shall say that preside in the place, which the Lord your God shall choose, and what they shall teach thee according to his law; and thou shalt follow their sentence; neither shalt thou decline to the right hand nor to the left hand. But he that will be proud and refuse to obey the commandment of the priest who ministereth at that time to the Lord thy God and the decree of the judge, that man shall die and thou shalt take away the evil from Israel. And all the people hearing it shall fear, that no one afterwards swell with pride." We gather from these words that under the old law anyone who did not obey the command of the priest and judge about any difficult or doubtful question at all was worthy of death. It follows from this that no one was permitted to doubt whether a priest and judge had made a correct determination. It is much more the case, therefore, under the new law, which is known to have more perfect ministers, that no catholic is permitted to doubt whether the pope makes a correct determination on a question of faith. This would not be true if the pope were able to err against faith.

Student: The text from Deuteronomy that you have brought forward does not seem to be to the point because it does not speak about a question of faith but about other civil and criminal questions.

Master: This does not hinder the argument because there should be no anxiety about the judgement in a question of faith of that one whose judgement should not in any way be doubted in civil and criminal questions. For whoever can not err in questions of this kind also will not be able to err in a question of faith because anyone who can err against faith will also be able to go astray in other [questions], since those who err in faith should also not be believed on other [questions] because, as the sacred canons testify, unbelievers and heretics can in no way at all make a judgement or offer testimony in cases concerning believers.

Student: I will have a conversation about this with you later, so would you pass on to other arguments.

Master: A fifth argument is as follows. Someone appointed to a dignity which confers the sanctity of innocence on the one holding it can not become a heretic. But the papacy confers the sanctity of innocence on the pope, as Pope Symachus attests. As we find in dist. 40, c. Non nos [col.145], he says, "Who will doubt that he whom the crown of so great a dignity raises up is holy? If he lacks any good which is acquired by merit, that which was shown by his predecessor in the position suffices. For it either raises the famous to these heights or it makes shine those who are raised." We gather from these words that him whom the dignity of the papacy raises up it makes shine with holiness even if he were bad before. So he can not become a heretic unless he renounces the papacy.

[It is argued] sixth as follows. If a pope could err against the faith and be infected with heretical wickedness, by the same argument and more convincingly can any Christian at all be condemned for heresy. But when anyone at all from some college can become a heretic the whole college too will be capable of becoming heretical. From this it would follow that the whole congregation of Christians could incur heretical wickedness. This is clearly opposed to gospel teaching.

A seventh [argument is] as follows. Whoever can err against faith can command something against divine precepts. It is not necessary, however, to obey in all matters him who can order something against divine precepts because, in accord with blessed Peter's opinion in Acts 5[:29], we should obey God rather than someone ordering something against God. So if a pope can err against faith it is not necessary to obey the pope in all matters. But this seems to oppose the sacred canons for, as we find in dist. 19, c. Nulli [col.61], Gregory says, "It is not lawful for anyone to want or be able to transgress the precepts of the apostolic see." As we find in dist. 12, c. Preceptis [col.27], the same Gregory also says, "Let not the apostolic precepts be resisted with obstinate pride but let those things which have been commanded by the holy Roman church and its apostolic authority be discharged in a healing way.' It is clear from these that the precepts of a pope should be obeyed in all matters; and as a consequence he can not err.