Cardinal Burke: ‘I’m Called The Enemy Of The Pope, Which I Am Not’ BURKE Meets With ALEXANDER TSCHUGGUEL 3 JUNE 2019 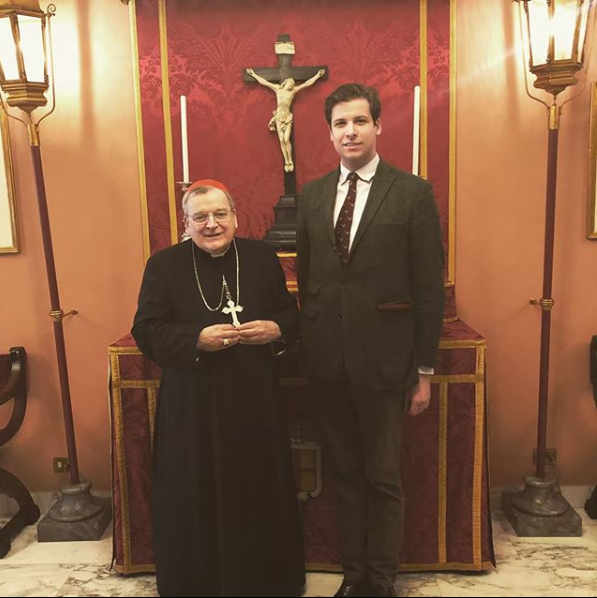 Cardinal Burke: ‘I’m Called the Enemy of the Pope, Which I Am Not’ A conversation with Cardinal Raymond Burke.

During the synod, a controversy erupted over a wooden statue of a naked, kneeling pregnant woman, which was used by indigenous attendees in a prayer service and displayed in churches in Rome. She was sometimes described as an image of the Virgin Mary, sometimes as an embodiment of fertility or nature or Mother Earth. This ambiguity convinced many traditionalists, Burke included, that pagan worship was being smuggled into the church: “The statue in question is an idol,” he told me flatly.

In the last days of the synod, a young traditionalist Catholic took one of the statues from a Roman church and hurled it into the River Tiber. He subsequently revealed himself as an Austrian named Alexander Tschugguel, and there was a picture on Instagram showing him with Burke. When I asked about the incident, I expected the cardinal to disavow any personal knowledge of the young man.

Burke: While I know quite well and regard highly Alexander Tschugguel, especially for his courageous and tireless work in defending the inviolability of innocent human life and the integrity of the family, I had nothing to do with his removal of the pagan idols from the Church of Santa Maria in Traspontina and his throwing them into the Tiber.  At the same time, knowing his deep Catholic faith, I can understand why he found it intolerable that pagan idols be displayed in a Catholic church. It reminds me of similar situations in Old Testament times, for example, the case of the Maccabee brothers, and the case of so many confessors and martyrs, who would not tolerate that the Catholic faith be denied through the worship of pagan idols. Having listened to Alexander’s statement regarding his actions, I can only express my respect for him and my gratitude for his courageous witness to the faith. Source

OUR LADY OF LA SALETTE ON THE FORERUNNER TO THE ANTICHRIST:

OUR LADY OF FATIMA ON THE MURDER OF THE FATIMA POPE AND FAITHFUL:


1. The Antichrist shall deny that Jesus is Christ, and for that cause shall impugn all the ordinances of Our Savior, as Baptism, Confirmation, & c. and shall teach that Circumcision is not yet ceases , nor the Sabbath, and the other ceremonies of the Law. I.Joan.2. Who is a liar, but he that denieth Jesus to be Christ? And this is Antichrist, who denieth the Father and the Son?

The Forerunner to the Antichrist wants to make himself to be looked upon as God, in order to do this the Forerunner must destroy all Gods so that only the Forerunner is worshiped. Alexander Tschugguel first public act was to destroy False Gods - the Pacha Mama Idol.

Alexander Tschugguel fooled the Rad Trads into thinking that this first public act of destroying False Gods was a Holy act and not a nefarious act on his part.

Did not Alexander Tschugguel get what he wanted from the Rad Trads - to be worshiped by them?

What is the purpose of coming forward?

What about the other guy that was with Tschugguel? Was the other guy a MUSLIM? Or maybe a JEW? Don't Muslims and Jews destroy images?

Yeah that wouldn't go over too well if the RAD TRADS found out that the other Vienna boy was  a Muslim.

Alexander Tschugguel is playing the lot of you.

So hey let's also play with the Rad Trads and make them go into a frenzy and push them into thinking that Alexander Tschugguel is the Great Monarch and that he should be crowned as the Holy Roman Emperor. (I bet these assholes forgot about the one that tells us that the first man elected as Holy Roman Emperor during the coming restoration will be a failure and forgotten as an Emperor and morph into a Nationalist) let us watch Dr Taylor Marshall claim that he is responsible for the restoration of the Holy Roman Empire. Let us sit back and watch Alexander Tschugguel turn into the Forerunner to the Antichrist and murder the Fatima Pope and faithful and let us sit back and watch the hysteria.


I  bet  POPE Viganò crowns Alexander Tschugguel as the Holy Roman Emperor and when that misfires POPE Viganò  will declare himself Emperor.