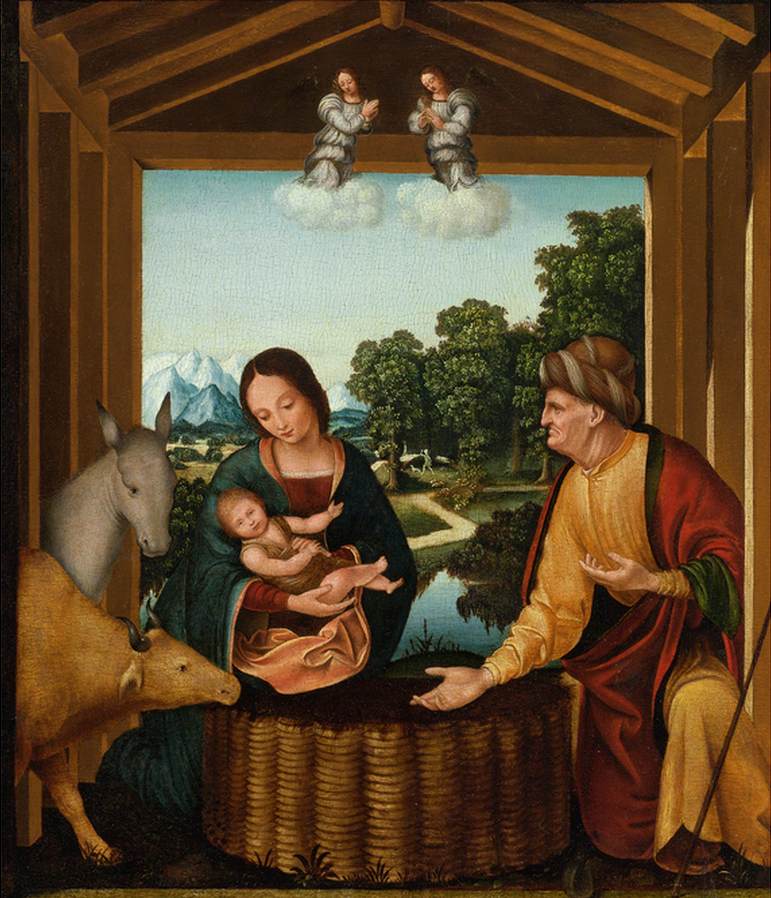 
"Listen, for I will speak of great things."

(1) It is no wonder if divine providence, which wholly transcends angelic and human powers of perception, often proceeds in ways that are hidden to us, inasmuch as human actions frequently conceal their meanings from men themselves. But it is a cause for great wonder when the workings of the eternal counsel are so clearly manifest as to be discerned by our reason.

(2) I am therefore at the beginning of this chapter able to recite the words of Solomon who says in Proverbs, in the person of Wisdom: "Listen, for I will speak of great things."

(3) When the infinite goodness of God willed to bring back into conformity with itself the human creature, who had been deformed by separation from God through the sin of the first man's transgression, it was decreed, in that most elevated and most united consistory of the Trinity, that the Son of God should descend to earth to bring about this harmony.

(4) Since the world (not only heaven, but earth as well) should be properly disposed for his coming--and the earth is properly disposed under a monarchy (that is, when it is fully subject to one prince, as has been said above)--divine providence ordained that those people and that city, namely glorious Rome, should be chosen to accomplish this end.

(5) Since even the abode into which the celestial king was to enter should be most clean and pure, it was arranged that a very holy lineage should come into existence, from which after many virtuous descendants a woman finer than any other should be born to become the chamber of the Son of God. This was the lineage of David, from which was born the pride and honor of the human race, namely Mary.

(6) Therefore it is written in Isaiah: "There shall come forth a rod out of the root of Jesse, and a flower shall spring from his root." Jesse was the father of the David referred to above. All this occurred at one point in time: David was born when Rome was born--that is, when Aeneas came to Italy from Troy, which was the origin of the Roman city, according to written records. As a result the divine choice of the Roman empire is made manifest by the birth of the holy city which was contemporaneous with the root of the family of Mary.

(7) Incidentally, it should be observed that from the time that this heaven began to revolve, it has never been in a better position than when he who created and rules it descended from above, as the mathematicians are still able to ascertain by virtue of their arts.

(8) Nor was the world ever, nor will it be, so perfectly disposed as at the time when it was guided by the voice of the one sole prince and commander of the Roman people, as Luke the Evangelist testifies. Since universal peace reigned everywhere, which it never did before nor ever shall again, the ship of human society was speeding on an even course directly toward its proper port.

(9) O ineffable and incomprehensible wisdom of God who at the same hour both over in Syria and here in Italy made your preparations so well beforehand! O utterly foolish and vile are you brutes who pasture as if you were men and presume to speak against our faith and, while spinning wool and tilling the soil, seek to know what God through his great foresight has ordained! Accursed be you and your presumption, and those who believe your words!

(10) As has been said above at the end of the preceding chapter of the present book, God gave Rome not only a special birth but a special evolution. For, in brief, from Romulus, who was her first parent, up to the age of her greatest perfection, namely the era of the emperor cited above, her evolution was effected by means not only of human but also divine undertakings.

(11) For if we consider the seven kings who first governed her--namely Romulus, Numa, Tullus, Ancus, and the Tarquin kings who were the rulers and the tutors, so to speak, of her youth--we will discover from the records of Roman history, especially from Titus Livius, that these were men whose natures differed according to the requirements of the historical moment.

(12) If we then consider her more advanced youth, after she was emancipated from the tutelage of the kings, from the time of Brutus, the first consul, up until Caesar, the first supreme prince, we will find that she was exalted not with human but with godlike citizens whose love of her was inspired not by a human but a divine love. This could not and should not have happened unless there was a special end, conceived for her by God, brought about through a very great infusion of celestial grace.

(13) Who will say that Fabricius was not divinely inspired when he refused to accept an almost infinite amount of gold because he would not abandon his country? Or Curius, whom the Samnites attempted to corrupt, when he refused to accept a huge quantity of gold for love of his country, saying that the citizens of Rome sought to possess not gold but the possessors of the gold? Or Mucius, who set fire to his own hand because the blow by which he thought to deliver Rome fell wide of its mark?

(14) Who will say that Torquatus, who sentenced his own son to death out of love for the public good, could have borne his suffering without divine assistance? Similarly the already mentioned Brutus? Who will say this of the Decii and the Drusi who laid down their lives for their country? Who will say that the captive Regulus, having been sent from Carthage to Rome to exchange Cathaginian prisoners for himself and the other Roman prisoners, was moved solely by human and not divine nature when for the love of Rome he gave advice to his own disadvantage after the envoys had withdrawn?

(15) Who will say of Quintus Cincinnatus, who was made dictator and taken from the plough, that he renounced his office after having completed his term and returned of his own accord to the plough? Who will say of Camillus that, after being banished and cast into exile, he returned to free Rome from her enemies, and that after freeing her he went back into exile of his own accord in order not to offend the authority of the Senate, without divine influence?

(16) O most hallowed breast of Cato, who will presume to speak of you? Surely we cannot speak of you better than by observing silence and by following the example of Jerome, who says, in his preface to the Bible, where he refers to Paul, that it is better to keep silent than to say too little.

(17) Surely it must be evident as we recall the lives of these and all the other godlike citizens that these wondrous events took place, not without some light of the divine goodness over and above their own natural goodness. It must be evident that these men of supreme excellence were the instruments with which divine providence realized the evolution of the Roman empire, where on many occasions the arm of God appeared to be present.

(18) For was the hand of God not evident in the battle in which the Albans fought with the Romans, at the beginning, for the control of the Empire, when the liberty of Roman lay in the hands of a single Roman? Was the hand of God not evident when the Gauls, having taken all of Rome, secretly seized the Capitol during the night and only the cry of a goose made it known?

(20) Consequently we need seek no further proof in order to see that this holy city had a special birth and a special evolution, conceived and ordained by God. I am most certainly of the firm opinion that the stones lodged in her walls are worthy of reverence and that the soil on which she rests is more worthy than is commonly proclaimed or established.
Email Post