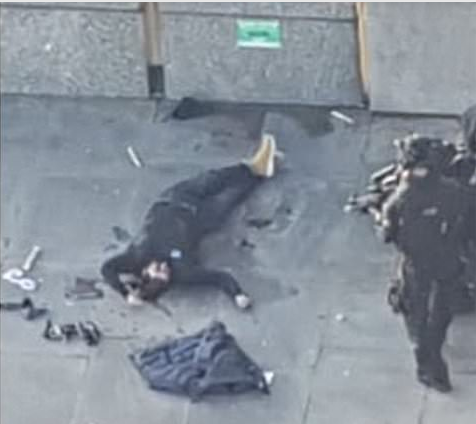 London Bridge attacker was an Islamic extremist released from jail a year ago and 'still wearing an ELECTRONIC TAG': Killer broke free from a nearby prison rehabilitation event to go on the rampage that left two dead - before police shot him dead

The knife attacker shot dead on London Bridge was known to police and had connections to terror groups, a security source said. The attacker had links to Islamist terror groups, the security source added. The knife-wielding terrorist, who was wearing a fake suicide vest and has not been named, was killed on London Bridge on Friday afternoon in full view of horrified onlookers. The attacker was a convicted terrorist who had served time in prison and was wearing an electronic tag, according to The Times newspaper. The paper added he was attending a Cambridge University conference on prisoner rehabilitation being held at Fishmongers' Hall and 'threatened to blow up' the building. It went on to quote unnamed Whitehall sources as saying the attacker had been released from prison around a year ago after serving time for a 'terrorism-related offence', and had agreed to wear an electronic tag.   A maintenance worker who witnessed the London Bridge knife attack claims he was told the assailant had been in prison for terrorism offences. Source