Proof#9 That Rad Trads Will One Day Murder The Fatima Pope: I Kind Of Want To Fight. For Some Reason..... 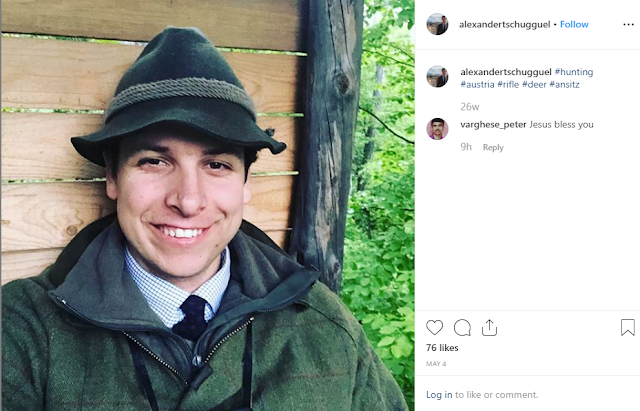 Alexander Tschuggel
Forerunner To The Antichrist

The big question: What do we do? Pray, obviously, and shuck any vestiges of non-traditional Catholicism in our lives. But I kind of want to fight. For some reason, I see this Pachamama demon as an antithesis of the Virgin Mary. Mother Earth vs. Mother Mary, or a generic cult of “fertility” vs. the veneration of the Theotokos. That makes me so angry. It makes me so angry that our pope, our bishops, and our cardinals are disrespecting our Mother so blatantly and viciously. It makes me so angry that I want to take the wooden idols and smash them to pieces before hurling them into the Tiber, this time for good. How can I turn that anger to constructive purposes? Source

Little Enraged Rad Trad Jimmy will get his wish.

Rad Trads now have a Leader.

He is a Hunter.

He is the Forerunner to the Antichrist.

Dante had a vision of the Fatima Pope and the forerunner to the Antichrist that will one day murder the Fatima Pope - it's found in the above lines of canto xxxiii inferno.
If you know the mind of Dante better than I do then you need to correct me.