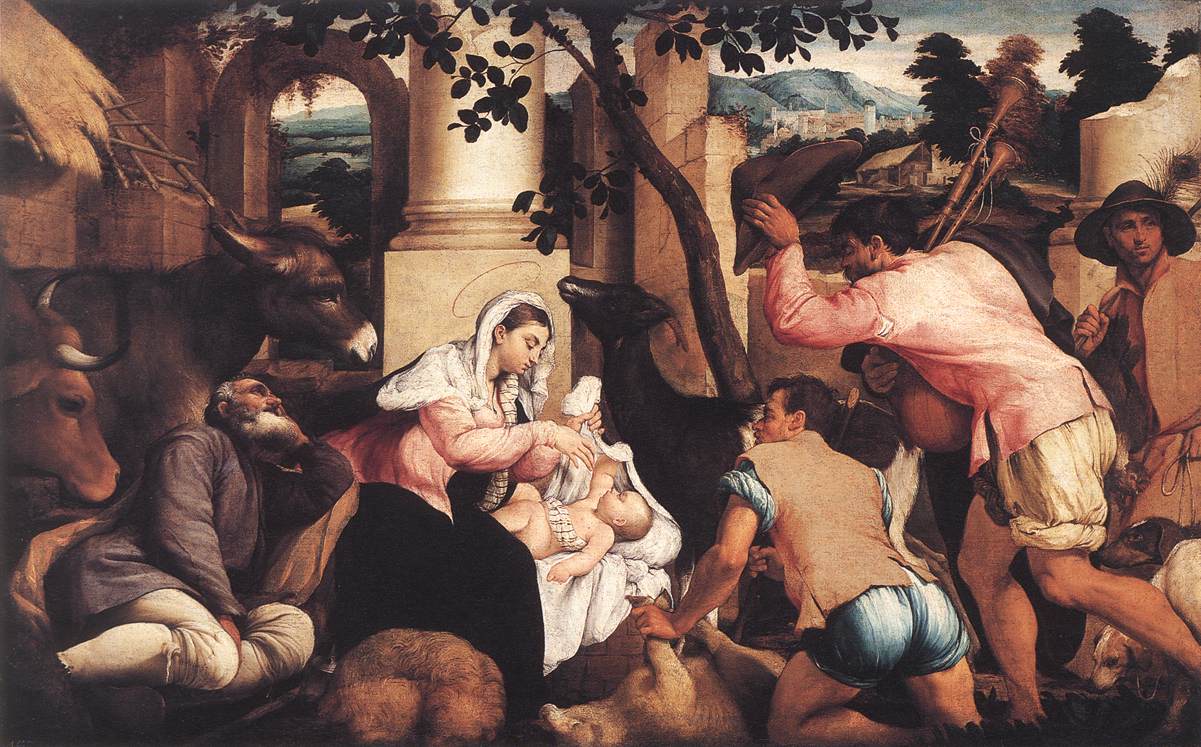 BASSANO, Jacopo
Adoration of the Shepherds
1544-45

Opinion 1: The Roman Empire was established by God, not men

Again, speaking about the emperor in the same chapter, Pope John says [c.11, col.341], "... lest he strive to burst against him," that is God, "by whom everything has been established, and lest he be seen to fight against the benefits of that one from whom he acquired his own power."

Again, blessed Cyprian, as we find in dist. 10, c. Quoniam idem [c.8, col.21], and Pope Nicholas, as we read in dist. 96, c. Cum ad verum [c.6, col.339], assert the same opinion in the same words, saying, "Jesus Christ, at the same time a mediator with God and a man among men, separated the duties of each power by its own acts and distinct dignities." At this point the gloss says [col.466], "Rather the opposite seems to be the case, because he did not separate but confuse when he who was one and the same undertook both offices. But say that he undertook both offices himself to show that they came from the same source. For the law says that the highest gifts, that is the priesthood and the empire, have been granted to us by God, (in the beginning of coll. 1 of Auth., `How it behoves bishops')." [[check]]

Again, as we read in 23, q. 4, c. Quaesitum [c.45, col.924], Pope Innocent, speaking about secular powers says, "They," that is our ancestors, "remembered that these powers were granted by God and that the sword was permitted to punish the guilty and given to the minister of God for this sort of punishment. How, therefore, will we find fault with an arrangement which is seen to have been granted by God's authorship?" We gather from these words that the secular powers are from God. Most of all, therefore, is the imperial power from God. All these things are confirmed by the apostle when he says at Romans 13:1, "There is no power except from God."

Student Tell me briefly how that argument is rejected.

Master It is rejected by virtue of the fact that because we do not read that God himself established the emperor and did not do so through another, that opinion can as a result be disdained with the same ease as it is proved.

Student Tell me how reply is made to the arguments for that opinion.