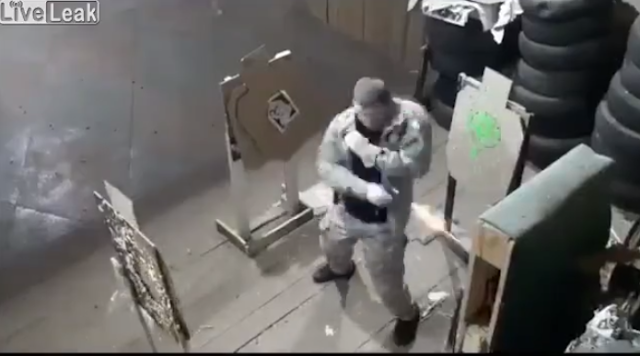 The training involves skills that are perishable.   Therefore, the training has to be serious, repetitive, regular, and ongoing.   When things happen, people generally regress to their level of training. Fr. Z

Perhaps the firearms training many of us have undertaken is helpful as an analogy. First, you seek to avoid conflicts or deescalate them. When you can’t avoid violence you try to discern the level actually needed. Of course, this sometimes must happens in seconds. In the case that you are forced to act in defense of your life or the lives of others, you use deadly force to stop the threat. That means you shoot effectively to stop the threat. You don’t try to shoot the gun out of the enemy’s hand (this isn’t TV). You don’t shoot to hit the leg (because, again, this isn’t TV). You shoot center mass, to do maximum damage so the threat will stop, because … that’s the point you are at. You don’t shoot “to kill”. Shoot (or whatever) so that the clear, present danger to life and limb is no longer a threat. If a punch in the face or a kick in the ‘nads is enough, and the threat stops, then stop there. Stop punching and kicking. That’s an analogy from a few horrifying seconds of immediately conflict or threat. In prolonged situations, we have time to analyze our motives and consciences. Fr. Z


Fr. Z On Wearing Guns Under His Vestments While Saying Mass:

About carrying a handgun while saying Mass… I am neutral on that point. It is wrong for a priest or bishop to say Mass with his wallet in his back pocket? Money can be misused, after all. Can he have his smart phone in his pocket? A pocket knife on his key ring? You can do bad things with smart phones or knives or keys  Fr. Z