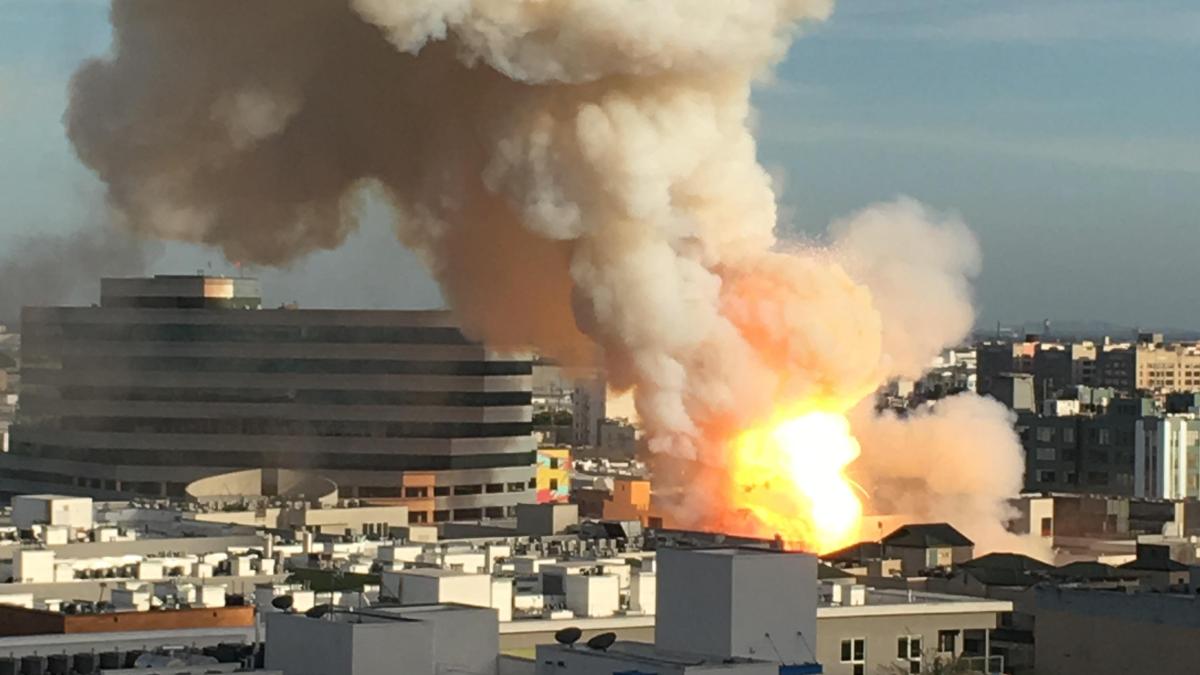 The blast was reported around 6:30 p.m. while firefighters were responding to a fire at a one-story structure at 327 E. Boyd St., just outside Little Tokyo, according to LAFD.

LAFD Fire Chief Ralph Terrazas said the firefighters did what they usually do: Some went in through the front of the building, and the rest went up on the roof. But things didn’t seem right, he said.

The smoke pressure inside was escalating and it was getting hotter.

The officer in charge directed everybody to get out quickly, and as they were trying to leave, the explosion rang out, the fire chief said.

“Our firefighters came down the aerial ladder from the roof with their turnout coats on fire,” the chief said.

A mayday call was transmitted over the radio.

“The kind of call I always dread is a significant incident, with the potential of a lot of our firefighters injured,” the fire chief said, standing at the scene of the explosion next to the rescue ambulance of Fire Engine 9, which belonged to the crew with the injured firefighters.

The fire appears to have started at Smoke Tokes Warehouse Distributor, a supplier for businesses that make butane honey oil, LAFD Captain Erik Scott said during a news conference. Terrazas said firefighters found small butane canisters inside and outside.

Video showed dark plumes of smoke billowing over the area and flames shooting up from at least one of the buildings as sirens wailed in the background.

Four firefighters will be going to the burn intensive care unit, two were placed on ventilators for swelling of their airways from inhalation of the superheated gases, and the others suffered varying burns to their upper extremities, ranging from very serious, to moderate, to minor, according to Dr. Marc Eckstein, attending physician at L.A. County USC Medical Center, where the firefighters were being treated.

“We have every anticipation the firefighters will pull through,” the doctor said.

Doctors said all of the crew members were alert when they were brought in, and that it could have been even worse.

“We know we’re at risk when we go to any emergency, but we never want to see this happen,” department spokesman Nicholas Prange said.

LAFD upgraded the incident to “a major emergency” shortly after the explosion, and over 230 firefighters responded to the fire, going into defensive mode as they battled the flames, authorities said.

LAFD reported firefighters extinguished the bulk of the fire around 8:10 p.m.

But firefighters responding to the blast were met with a difficult situation, pouring water on the flames from outside as they were unable to go inside of the buildings, Prange said.

“We’re always worried about a secondary explosion, we don’t know what caused the first one and we’re trying to avoid this incident becoming even worse if the second one does happen,” Prange told KTLA.

It remains unclear what set off the explosion and whether there were hazardous materials involved. Scott said the cause of the blast is under investigation and that a hazmat team responded to the scene.

As the flames raged earlier in the evening, Prange told people in the area to find a way to shelter themselves from the smoke, saying even a tent would help. The explosion rang out just a few blocks away from Skid Row.

The explosion drew onlookers, and concerned residents took to social media to share video of the flames. Source