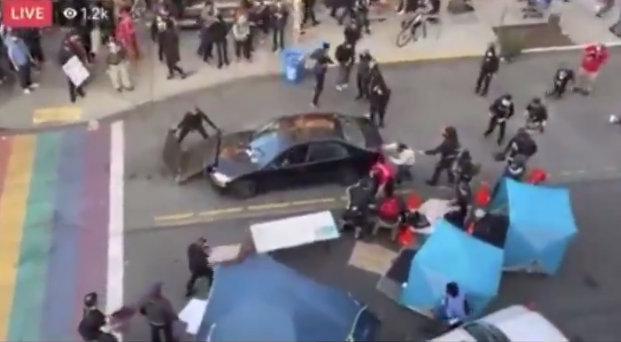 A man drove a car into the sea of protesters at 11th Avenue and Pine Street at about 8:30 p.m. and reportedly shot a protester trying to disarm him before he got out. Several witnesses on Twitter said a protester tried to disarm him. The Seattle Fire Department said in a tweet that the approximately 27-year-old victim was transported to Harborview Medical Center. A video by a journalist at the scene captured the victim being walked to medics with a gunshot wound to his arm. SFD said he was in stable condition.


Video footage of man driving his car into #BlackLivesMatter protest in Seattle and shooting a man through the window before he flees. #seattle #seattleprotest pic.twitter.com/3iUI7eKEye
— SeanNyberg (@SeanNyberg) June 8, 2020


Police officers eventually detained the man after sending out alerts that someone in the crowd had a gun. In a tweet, the Seattle Police Department said officers had recovered the gun and found no other victims. Hundreds of protesters were in the crowd, with Seattle police officers and members of the National Guard on the other side of a barricade that has been on the street since last weekend. From Capitol Hill to South Seattle, community members had been out all day protesting against racism and police brutality in the wake of the George Floyd killing last month in Minneapolis. Source
Email Post