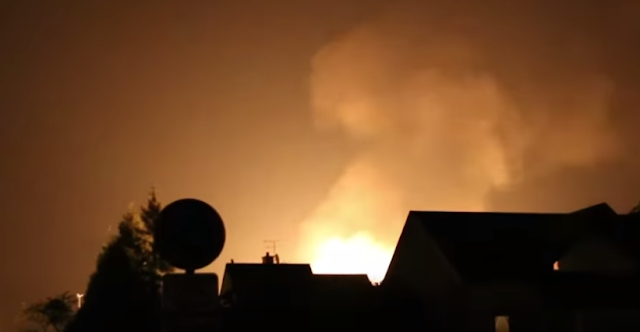 Residents in Plancoet, in northwestern France, were rudely awoken in the middle of the night by a series of ferocious explosions at a nearby supermarket, which blew out windows and forced evacuations. Roughly 40 firefighters from the town and nearby villages were deployed to tackle the blaze near the Hyper U store in Plancoet, which broke out at around 2:38am local time. Eyewitness footage from the scene shows the incredible power of the explosions. It comes amid fears that an arsonist might be wreaking havoc in the area.Exploded gas bottles were found over 50 meters away from the fire, and there is also a liquefied petroleum gas tank nearby which firefighters were extremely concerned might explode during the initial phase of their operation. Hampering their efforts further was the risk of additional gas cylinders exploding and becoming improvised missiles, forcing firefighters to keep their distance and rely on water cannon to tame the blaze. Some 55 people were evacuated, while a further five were ordered to shelter in place in their homes, but thankfully there were no injuries or fatalities reported. Source