+IHS PASSION OF OUR LORD: The 24 Meditation Of the Whipping Of Our Lord 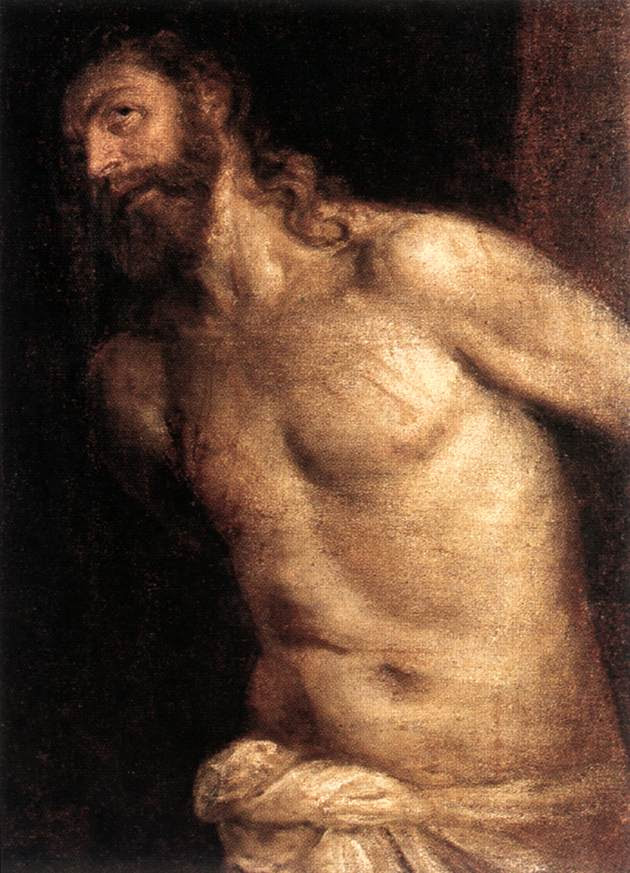 
The 24. Meditation of the whipping of our Lord.

Then Pilate apprehended him and whipped him. Then the Soldiers of the President taking Jesus, carried him into the Pretors court, and they gathered together all the company unto him.


Consider first, that the spouse of thy soul, that he might betroth himself unto thee, was divers ways mocked, spit upon, pulled, and beaten: but now he is come to wounds and blood; that he, which gave unto thee his honors, liberty, and other corporal goods, and suffered himself to be spoiled of all these for thy sake, might now in like manner plentifully shed his blood, and pour out his bowels, that he might see, what liberality thou wilt use towards him again.

Consider secondly two causes, why Pilate used this whipping. The one was, that by the sight of the body of Christ torn with so many strips, he might somewhat pacify the fury of the Jews, and stay them, from the desire of the Cross. The other was, that if nevertheless they persisted in their fury, this whipping should go before his crucifying. For by the laws of the Romans, such as were to be crucified were first whipped. But the true cause of the whipping of Christ according to the will of his Father, was first that thou, which wert sick in every part of thy body, mightiest be wholly cured by the wounds of his whole body. Secondly that he might receive thee wholly, who gave himself wholly for thee. Thirdly, that thou shouldest open the bowels of thy love towards him, who by these stripes opened his body to thee.

Consider thirdly, that Pilate delivered Christ to the Praetorian Soldiers, who assembled their whole band, which was the tenth part of a Legion, to wit: Six hundred sixty six Soldiers by whom he was carried into the court of the Praetor, that is, into a more spacious room, & forsaken of all friends was exposed unto the prey, like a Lamb in the midst of Wolves. Enter thou into this Court; mark attentively the cruel wantonness of the Soldiers, and the modesty of Christ in all these miseries, his clear and amiable countenance, and his incredible patience. First they despoiled him of all his clothes, & set him naked amongst them. Consider the shamefastness of thy most chaste Lord set naked before so great a company of men, and keep the clothes, which he put off, to cover thy nakedness. Then they tied his holy body to a pillar, with his arms stretched up, that his whole body might be subject to stripes. Then every one made a whip, either with rods brought thither of purpose, or else of cords, (for this word…., which we call a whip, as Euthemius noteth, is a scourge woven with little cords or leather thongs) and every one fell to work. Pray thou thy Lord, that this his nakedness may cover thy soul with his heavenly grace and virtues; and these his bonds free thee from sins; and this his being alone amongst his cruel enemies, may deliver thee from the hands of thy enemies.

Secondly, of the whipping itself.

Thirdly after his whipping.

Consider first, the tormentors were wearied; the whips and rods failed; and Christ, being spent with pains and loss of blood, was scant able to stand upon his feet. Spare not thou thyself, but spend thy youthful years and strength in the service of thy Lord.

Consider secondly how thy Lord crept up and down to gather up his scattered clothes, and put them on, not without great pain, which cleaved to his wounds, and were spotted with blood, and hurt his sores. Do thou gather together the Church being the vestment of Christ:and spare no labor to gain souls which are washed with that blood. Wash the wounded body of Christ with thy tears, and anoint it with the oil of Charity and Devotion, and omit nothing which thou thickest may help towards the cure of this body, and of the members thereof.

Consider thirdly, that Christ our Lord did drink his blood thus plentifully unto thee in this his whipping, & in his corronation following in the third hour,in which same hour after his Ascension into Heaven, he sent down the holy Ghost into the hearts of his Apostles & of his whole Church. That thou mayest learn, first that the blood of Christ was plentifully shed, that the grace of the holy Ghost might plentifully be communicated unto thee. Secondly that at the same time, when the effusion of this blood is remembered, & renewed in the Church by the Sacrifice of the Mass, thou being present shouldest with open heart plentifully receive the fruit of this blood, the grace of the holy Ghost, and divers other gifts. The Meditation hereof stirred up admiration, increaseth confidence, enkindleth love, moveth compassion, bringeth sorrow for sins, exhorteth to labor, and melteth the soul in giving thanks.