More than 30 killed as two trains collide in Egypt

Cairo (CNN)At least 32 people have been killed and 165 injured after two trains collided in Egypt on Friday, according to government statements.  Seventy-two ambulances were sent to the scene and reinforcement medical teams were sent to the incident in the Tahta district of the Upper Egypt governorate of Sohag from the capital Cairo, the Health Ministry said. Health Minister Hala Zayed said in a news conference that two planes were dispatched from Cairo with 52 medical teams from various specialties on board to treat the injured. Images from the scene showed crowds of people gathered around the twisted wreckage of the trains. The collision happened after an unidentified person pulled an emergency brake, Egypt's railway authority said in a statement.  Source

HUALIEN, Taiwan (Reuters) - A Taiwan express train with almost 500 aboard derailed in a tunnel on Friday, killing at least 48 passengers and injuring 66 in the island’s worst rail disaster in almost four decades.     Images from the scene showed carriages in the tunnel ripped apart by the impact, with others crumpled, hindering rescuers in their efforts to reach passengers, although by mid-afternoon no one was still trapped.  “People just fell all over each other, on top of one another,” a woman who survived the crash told domestic television. “It was terrifying. There were whole families there.”  The crash, north of the eastern city of Hualien, killed the driver of the train carrying many tourists and people heading home at the start of a long weekend traditional holiday to tend to family graves.  Source

Two die in Texas after Tesla 'on auto-pilot with no one in driving seat' crashes into tree and starts massive four-hour fire that took 32,000 GALLONS of water to extinguish

Two men died after a Tesla 'on autopilot with no one driving' crashed into a tree in Houston before starting a huge fire that took 32,000 gallons of water to extinguish.   The fully-electric 2019 Tesla Model S slammed into the tree in Carlton Woods at around 11.25pm on Saturday night before bursting into flames with the passengers still inside.   Harris County Precinct 4 Constable Mark Herman said an investigation had found that 'no one was driving' when the accident happened, with one man sitting in the passenger seat at the front and the second sitting in the back. Officials told KPRC 2 that the $80,000 vehicle was moving at high speed when it failed to negotiate a cul-de-sac turn, ran off the road and crashed.   Fire fighters used 32,000 gallons of water over four hours to try to put out the flames because the car's batteries kept reigniting.   At one point, deputies had to call Tesla to ask them how to put out a fire in the battery.  Dailymail.com has contacted Tesla for comment, as officials prepare to carry out autopsies on both men. Source 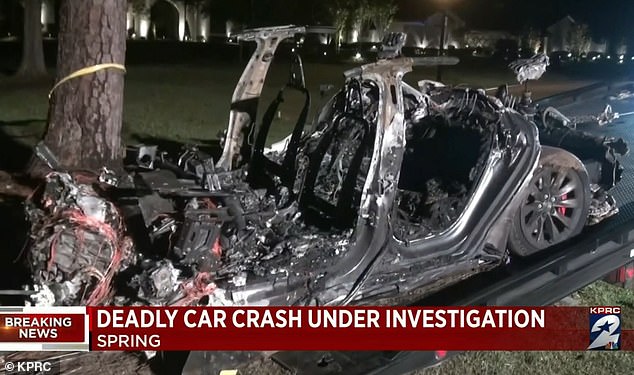